Chances are even Capcom themselves would admit the first Street Fighter was downright terrible. An exercise in sheer frustration, it suffered from jerky animation, unreliable controls, and botched mechanics. Special moves, which rarely worked, could remove 70% of an opponentâ€™s health in one swoop, making the regular kicks and punches almost redundant.

Itâ€™s a series low point, yet one that still made the cut on this compilation simply for the sake of comprehensiveness. After all, thereâ€™s no better place to start a trip down memory lane than with the game that kickstarted a â€˜90s phenomenon.

Rather than include one entry from each title in Street Fighterâ€™s long-running history, this collection gives the chance to take in the evolution of Street Fighter’s first decade, step by step. 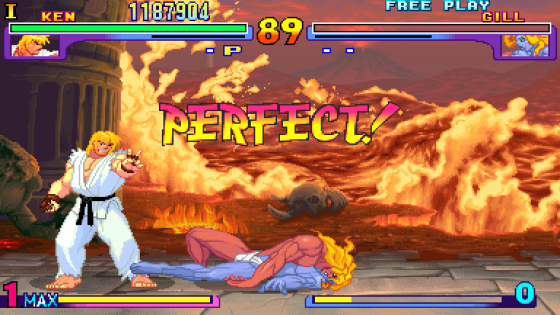 The jump between Hyper Fighting and Super Street Fighter II was pretty significant, with dozens of notable changes thanks to new hardware and the beginnings of the Super Combo system. However, outside of playable bosses and turbo speed settings, the differences between the first three SFII outings are negligible. Improved artwork, a few nips and tucks, and thatâ€™s about it. Still, itâ€™s interesting to observe the changes made from one version to the next, no matter how minor.

Many expected Capcom to jump straight into Street Fighter III a year later â€“ because thatâ€™s how sequels work, right? â€“ but no, instead came the Alpha series. 1995â€™s Street Fighter Alpha: Warriors’ Dreams â€“ which also saw the series jump from SNES and Mega Drive to PSone and Saturn, the obscure SNES conversion of Alpha 2 notwithstanding â€“ expanded on the Super Combo system for a deeper, more technical, experience.

Each entry in the Alpha series feels more substantial than the last; theyâ€™re far from being mere yearly updates. In fact, two whole years passed between Alpha 2 and Alpha 3. Those years were well spent â€“ Alpha 3 was an absolute belter and an undeniable highlight here.

The three-level Super Combo gauge really added a new layer of depth, and visually it nailed the anime-style Capcom was aiming for back in the original Alpha. The only downer is because this collection only features arcade renditions, the extras from the home versions are missing. 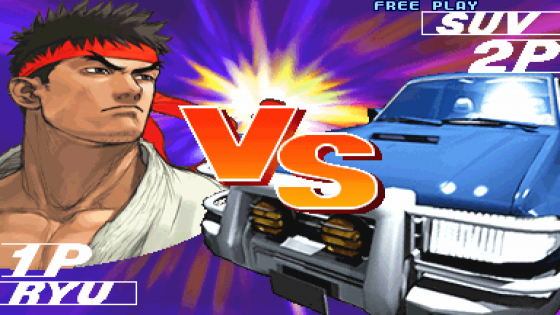 After years of speculation (every American gaming mag seemingly had a regular SFIII rumour column), SFIII finally made its mark in 1997 – six whole years after SFIIâ€™s debut.

Did it blow gamers away? Not initially, no. It was hoped SFIII would see Capcom take on the likes of Tekken and Virtua Fighter and make the polygon fighter battle a three-horse race. In short: it was shunned by â€˜casualâ€™ fighting fans for remaining in 2D. It wasnâ€™t until it hit the Dreamcast in 1999 â€“ two years after the arcade – that it received the praise and attention it deserved.

The proof was, of course, in the playing â€“ SFIII was deep, refined, andâ€¦a little peculiar. Only Ken and Ryu returned, and even then, they were no longer cover stars â€“ American brawler Alex took their place. Many characters made Blanka look positively normal, with a line-up taking a more fantasy/monstrous approach. It should be noted, however, that the quality of animation was outstanding. SFIII may have stuck with 2D, but it did use CD-ROM technology to allow for more frames of animation than ever before. 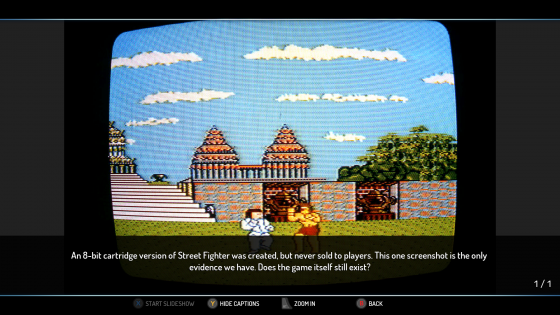 And thatâ€™s our lot. While itâ€™s easy to rattle off omissions – indeed, Super Puzzle Fighter II Turbo may have made a neat novelty extra â€“ Capcom obviously had to draw the line somewhere to keep the focus on Street Fighterâ€™s first decade.

Some fans may baulk at the fact only four games (Turbo: Hyper Fighting, Super Turbo, Alpha 3, and 3rd Strike) feature online play, but this is clearly to keep lobbies well populated and matchmaking effortless.

Each game is perfectly preserved, with near-faultless emulation. As well as screen size, difficulty, and speed settings there are save states â€“ which load in a blink of an eye â€“ which make the likes of the original Street Fighter a tad more palatable and remove some of the frustration associated with SFIIIâ€™s Gill. A museum full of concept art, arcade flyers, design documents and a full timeline history round this package off nicely.