It sounds simple, numbers going up, but Dungeon Rushers proves that it’s a subtle mechanic, and one that’s easy to get wrong.

Let’s start with the basics. Dungeon Rushers is a dungeon exploration game. Each dungeon starts with one tile. You then guide yourself around uncovering new tiles. Under each tile could be a trap (which you have to deactivate or take damage), some treasure and an exit, a random buff or some enemies to fight. Fights are turn-based and surprisingly tactical.

It actually feels quite a lot like a board game. Instead of a character that moves around the dungeon, you move a token and the hidden parts of the dungeon flip as if they were cardboard. I could imagine playing it with chunky miniatures and dice rolling. 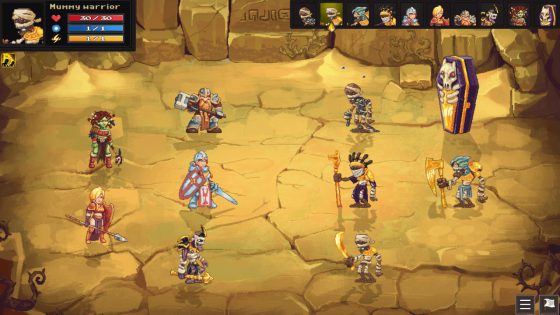 As you go through the dungeons you’ll unlock new characters and decide where each should stand and which enemies to hit and when is key to winning battles. Killing more enemies gains you experience, and all characters have comprehensive skill trees to invest their experience points in.

More dungeons unlock as you go and there’s absolutely loads of them to explore. There are multi-level dungeons and dungeons have special objectives that give you access to harder versions of each dungeon. You can also craft with loot you gain and create weapons and equipment for your adventurers.

Dungeon Rushers is stuffed with stuff.

But the numbers don’t go up enough. 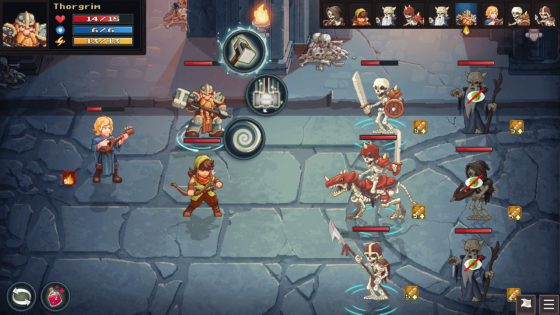 By the sixth dungeon, my adventurers were all still at level 2. Fights give out a measly amount of XP, often so little that it’s barely perceptible on the XP-increase chart. This slow doling out of XP makes the game feel really unrewarding. It’s really fun to unlock new abilities and gain new skills and this game doesn’t let you do it enough. Instead, you’re asked to grind your way through each dungeon multiple times to get enough XP to upgrade your dagger to do 10 points of damage rather than 8.

It’s all a big shame, really. Dungeon Rushers isn’t going to wow anyone; the graphics are perfunctory and the ‘satirical’ dialogue is teeth gnashingly-terrible, but it does have a gameplay loop which is really close to being satisfying, fun and addictive.

If only the numbers went up more.