There are a lot of ‘angles’ on Ridiculous Fishing: the tortured development; the indie supergroup that eventually finished it; the chart success since last week’s launch, despite having been preceded by a blatant clone; the active eschewing of IAPs in favour of a Â£1.99 upfront price tag. And 45 degrees: the angle that the graphics rigidly stick to. 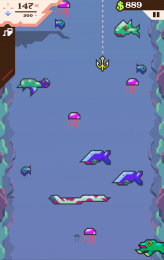 But only one thing really matters: it’s bloody good fun.

The mechanic is simple: drop your lure into the ocean, guiding it into the depths by avoiding the fish on the way down, using tilt controls of rare quality; when a fish is finally snagged, guide it back up, this time grabbing all the fish you can; when they the hit surface they’re launched into the air, which is your cue to shoot the heck out of them by tapping the screen. Simple, slick, ridiculous.

It’s everything that surrounds this that elevates it from simple fun, to alarmingly addictive.

Shooting fish to pieces somehow earns you money, which is spent in the shop on upgrades to your lure, your line and so on. They’re an enjoyable mix of ridiculous and logical: a toaster, for example, will electrocute the first thing you catch, giving you a second chance on the way down. A great deal of balancing has clearly gone into the rate at which money comes in: upgrades aren’t so frequent that you breeze through, unlocking all the areas without any effort; but neither does it feel like a grind. 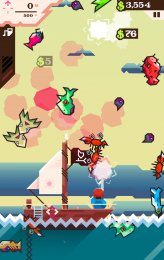 The shop isn’t the only way that the game keeps you interested. There’s Byrdr, the Twitter-like social network used by the game’s characters, which serves no real purpose than your entertainment – which is the best purpose. The Fish-o-pedia hints at fish you’ve yet to catch, but it’s the amusing descriptions of fish you’ve caught that stand out. The eel, for example: “Basically just a snake.” Fair point.

All this, the little mobile phone that you access it through, the 45 degree graphics, the infectious chip tune soundtrack – in every way, the developers have bothered.

They’ve bothered to make it fun. And then put some more fun bits in between, in case you’re not having enough fun just playing it. Bravo.