Regional taste and brand recognition are the reasons for the ten games below not being released in the UK.

It certainly doesnâ€™t have anything to do with the games in question being a little too odd â€“ this is the country that gave the world Little Britain, Fawlty Towers, Monthy Python and Mr. Blobby.

It has always amused us that a bakers in town still makes Mr. Blobby biscuits, even though todayâ€™s kids more than likely donâ€™t have a clue who he is. Which is probably for the best.

Anyway, here are ten games deemed not OK for UK: 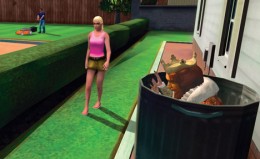 Several years ago Burger King asked their customers what theyâ€™d most like to see given away at their restaurants. The top answer was videogames, but rather than dismiss that as people having a laugh, they pulled out all stops out to release three different Xbox games. These were only available from Burger King restaurants for a limited time in 2006, at $3.99 each. That’s about Â£2.50 in real money.

Sneak King, Big Bumpin’ and PocketBike Racer were developed in the UK, by Blitz Games, but never granted release in the UKâ€™s artery clogging fast food outlets. They did at least provide a bit of work for the UK studio, who apparently did quite well off the deal.

PocketBike Racer and Big Bumpin’ were both rather fantasy arcade-like racers with an array of power-ups, but Sneak King? Sneak King was something else. Playing as Burger Kingâ€™s royal mascot, the idea was to hide inside bales of hay, boxes and bins and leap out to surprise random people with greasy treats. A Burger King stealth game, ladies and gents. We wonder if Hideo Kojima ever tried to import this one?

The sequel to 2008â€™s Deadliest Catch: Alaskan Storm was by a different developer yet somehow the two games ended up being rather similar. Perhaps they were peaking over one anotherâ€™s shoulders?

â€œClearly, Deadliest Catch: Sea of Chaos is a novel game,” said IGN in their review. They did, however, forget to mention if the game featured any giant enemy crabs. â€œThere’s really nothing like it out there on the market,â€ they then concluded. Weâ€™d wager that’s a good thing considering this TV show tie-in was mostly formed of repetitive mini-games.

Unless weâ€™re imagining things, we seem to recall this one appearing on a UK retailerâ€™s release list before then vanishing. Perhaps there were plans to bring it over here depending on viewing figures of the TV show? We may never know for sure, but we certainly wonâ€™t be losing any sleep over it.

When we think Lucha Libre, we think of Nacho Libre â€“ the mildly amusing Jack Black movie, which did in fact get a videogame adaptation on DS and PSP. We think itâ€™s fair to say that Nacho Libre helped to raise the profile of Lucha Libre â€“ a form of free-style wrestling, first born in Mexico â€“ to the point that if Konami had released this wrestler outside of the US, it would have done quite well.

After all, THQâ€™s WWE titles always sold superbly, despite typically offering few improvements over the last.

The Price Is Right: Decades

Confession time. We never watched The Price Is Right when Joe Pasquale presented the UK version of the show. We do recall catching a few of the Bruce Forsyth episodes back in the late ’90s, and Bob Warman before that. Weâ€™re too young to remember Leslie Crowther ever presenting it though.

The colourful gameshow must be a whole lot more popular in the US for Ubisoft to want to give it the videogame treatment. It was certainly popular enough to get not one, not two, but three appearances on Family Guy.

Sorry about the quality of those videos. And sorry for linking to Family Guy clips.

Jimmie Johnson’s Anything With an Engine 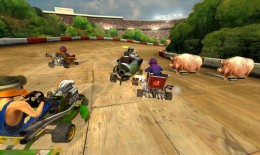 Think along the lines of Scrap Heap Challenge â€“ teams complete to build things (vehicles, in this case) using household objects like bathtubs and sofas, and then race to the death. Probably.

Reviews werenâ€™t too bad in actual fact â€“ a quick look at Metacritic reveals that it managed to gain a few 70%+ scores, with a few reviewers calling it a â€œcompetent kart racerâ€. If Konami were to stick this on PSN or Xbox Games on Demand, we’d give it a go.

Rock of the Dead

Remember when Guitar Hero was one of the biggest names in gaming? Conspiracy Entertainmentâ€™s Rock of the Dead was slipped out back when Activision were milking Guitar Hero for all its worth.

We always feared the various Guitar Hero clones that were released around the same time, as most were budget games. Due to being produced on a pittance, you could guarantee that it was always the list of songs that was going to take the biggest hit. Music licensing isnâ€™t cheap, unless you want a game full of artists nobody has heard of.

Rhythm-action game Rock of the Dead, then, had music from Rod Zombie and… well, that was about it. The other tracks were sourced from the public domain. It did have Felica Day providing some voice work, mind.

It has always struck us as a little strange that this first person Turok-alike wasnâ€™t released in the UK, especially when publisher Activision released that terrible Secret Service game over here. Jurassic: The Hunted was even by the same developer â€“ Cauldron, who now work on the Cabela games.

There are comparisons to be had with Cabela’s Dangerous Hunts 20xx â€“ when stalking dinos it was possible to activate a slow-mo feature to target specific body parts, and to quote Wikipedia here, â€œheart, lungs, brain, ribcage, backbone, liver, and intestinesâ€.

Everybody knows that a raptorâ€™s weak-point is its liver, right?

Man vs. Wild With Bear Grylls

When typing â€˜Bear Gryllsâ€™ into Google the second thing that pops up is the list is â€˜Bear Grylls fakeâ€™, which then takes us to sites confirming that Gryllsâ€™ survival skills were mostly staged with the TV celeb admitting to sleeping in motels and such instead of out in the wild.

Somebody, somewhere, thought this would make excellent videogame material. That somebody is Crave. The product description likens it to a role-playing adventure game, which is funny because the few reviews that are out there insist that itâ€™s nothing more than a collection of QTE mini-games.

â€œItâ€™s not terrible, but not even the ability to make Grylls drink urine or hollow out a camel for shelter are enough to make it compelling,â€ said The Official Xbox Magazine, who seemingly couldnâ€™t find more than 176 words to say about it. 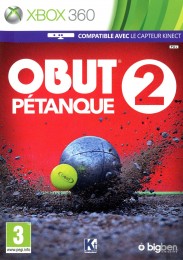 Whereas the rest of the games in this feature originate from the US, this one is in fact from France. Obut PÃ©tanque, for the uninformed, is a French version of lawn bowls. The fact that we mistook the image on the boxart as a snail amused us no end.

Improvements over the original Obut PÃ©tanque included Kinect support and a wider choice of balls. Stop giggling at the back. Weâ€™ll just have to take publisher Big Benâ€™s word that this one is â€˜Better with Kinectâ€™. If youâ€™re curious, you could always import a copy â€“ the French version will work fine on UK Xbox 360s. Incidentally, all the PS3 version of the games mentioned here can be imported without worry. 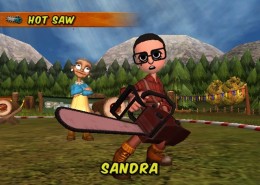 We very nearly chose Calvin Tucker’s Redneck Jamboree over this one, but then discovered that it somehow managed to get a UK release. Hunting sim Pheasants Forever was another contender too, which then left us dumbfounded when we discovered this was also was released in Europe. So, Majesco’s Go Play Lumberjacks it is.

Theyâ€™re lumberjacks and theyâ€™re OK. Except for the ones dressed as pirates, â€˜80s rock stars and ninjas. Thatâ€™s just… weird. If you ever wanted to see your Mii holding a chainsaw though, then here was your chance.