They might have peaked in about 2009, but there’s still a healthy market for games with the word ‘brain’ in the title – certainly on mobile. But rather than playing another clone of Nintendo and Dr Kawashima’s 2006 effort, why not contribute to medical science?

Well, there’s an app for that: The Great Brain Experiment, from the Wellcome Trust Centre for Neuroimaging at University College London, launched to coincide with Brain Awareness Week. Which was last week. My brain, clearly, was not aware.

The point is to harness all sorts of buzz words – ‘big data’, ‘the crowd’, ‘citizen science’, ‘gamification’ – to research a number of brain questions on an unprecedented scale. So rather than collecting data from a subject in an fMRI scanner, scores and basic demographic data are harvested from the willing smartphone population. 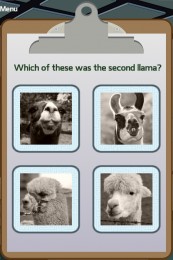 This scientific grounding lends the four mini-games another layer: as well as how well you’re performing, you inevitably begin to think about why. This is helped by the explanations of the games, and additional information on what the researchers are looking for.

Most interesting in that respect is ‘How much do I see?’, which investigates ‘brain blink’. This is the brain’s tendency to fail to see an object straight after a similar object, so you’re asked to look for the second llama, for example, in a rapid stream of images. Trying to process the information blasted at you is strangely satisfying, and it’s intriguing to see what you can make your brain do.

‘How much can I remember?’ asks you to repeat patterns of red rings, ignoring the yellow rings amongst them, to test your short term working memory. ‘Am I impulsive?’ seems like a simple reaction test, tapping to smash fruit as they fall but avoiding any that turn rotten, but is testing your ability to control your actions. Finally ‘What makes me happy?’ is a simple game of risk and reward, and investigates happiness in relation to this.

In isolation, they’re perfectly serviceable but unremarkable mini-games. But they’re made infinitely more interesting by the fact that there’s something going on behind them, and there’s a certain drive to make your brain do better. Plus there’s the tantalising prospect that the researchers may contact some players – through the app – for further research.

So play the games, contribute to scientific research – and for God’s sake try to be interesting.