I can’t imagine why I’ve never been asked to contribute to Thought For The Day on BBC Radio 4’s Today programme. I’d totally base one around iPhone game Crow. It’s got moral choices, you see. Really unsophisticated ones, which do little but switch the game into hard mode if you try to be good. I could relate that to Jesus, no bother. I doubt Anne Atkins has even heard of Crow. Then again, she does have religious conviction, regular commissions from national newspapers and three published novels. Fair point. 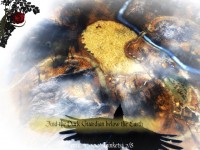 Crow’s gameplay – split starkly into ‘adventure’ and ‘action’ sections – largely continues the unsophisticated trend. The adventure element involves flying high above the landscape waiting to happen upon trinkets, pompous story points and action levels. Which is as interesting as it sounds.

The action is slightly more involved, though being on-rails, not hugely so. You have two gesture-initiated spells – a shield and an attack – and the ability to move around the screen to dodge incoming attacks – which is trickier than it should be because the perspective is a bit wonky. Boss battles can turn into a test of patience, requiring numerous ‘laps’ of the on-rails environment to inflict sufficient damage. It’s as satisfying as circling above Heathrow waiting to come in to land. 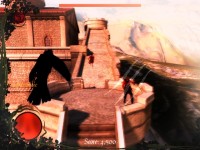 The trinkets you collect are used to purchase upgrades to your shield and attack. Later in the game, with faster regenerating magic and life energy, and with a chance of inflicting a second attack for free, there’s the beginnings of a moderately fun combat system. Then it ends.

It is pretty though. Developer Sunside’s in-house game platform is called Radiance, and the game does look suitably radiant. It looks better in screenshots or at a distance though; up close some of the detail is a bit lacking.

Despite all that, I began a second play through – the first took well under an hour – to unlock the aforementioned hard mode. As far as I can tell, it just makes you vulnerable to the point of instant death. Thanks for that.