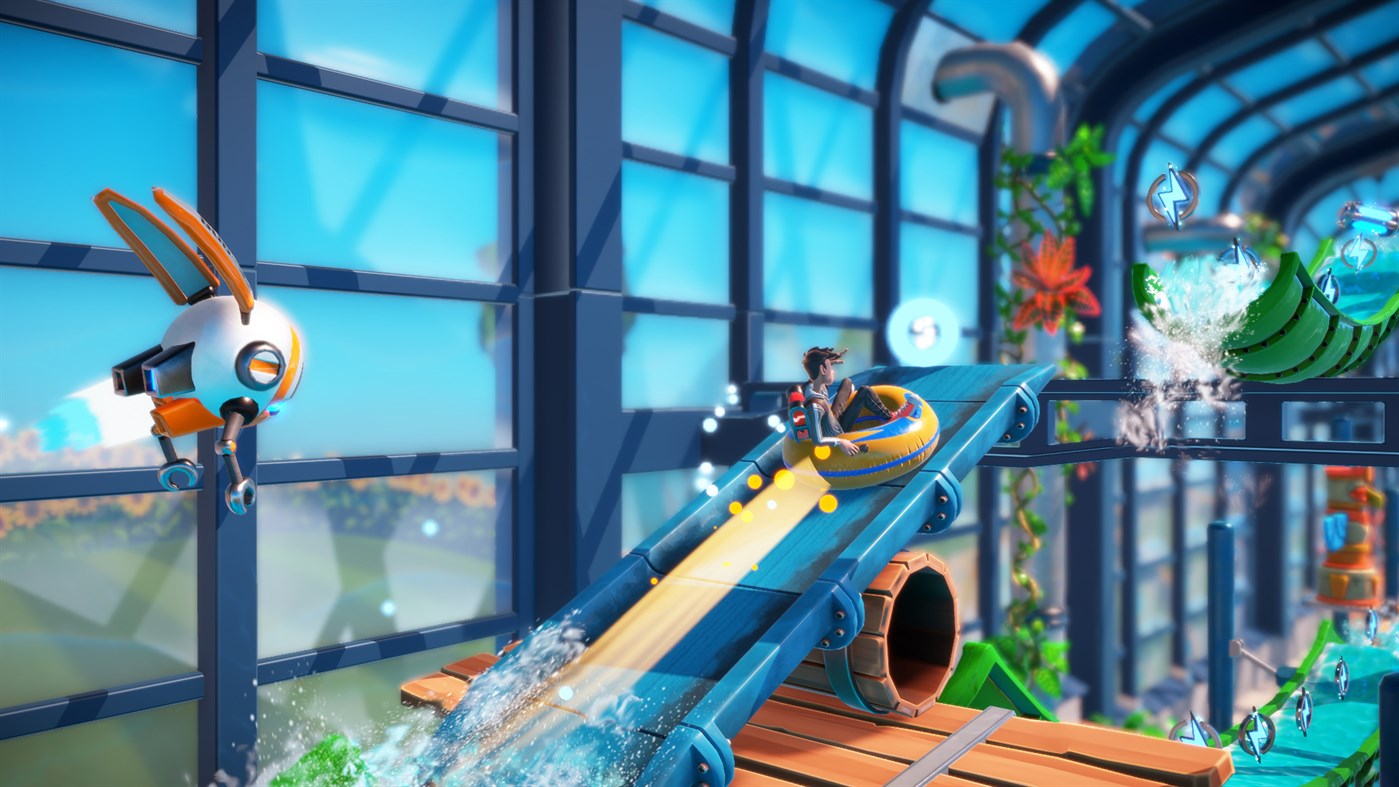 Late last year, Triangle Studios gave the world Slide Stars – a wet ‘n mild obstacle course-style party game starring real-life YouTubers and Vloggers. Think Trials HD, only with log flumes and novelty inflatables. The ideas it presented failed to mesh – events weren’t particularly chaotic or comical, and because characters were mute throughout it was oddly lacking in personality too. Why go to the effort of signing up influencers without asking them to record a few lines? We were more than a little perplexed by its existence, especially in light of its extortionate £35.99 price tag.

Nine months on, Mickey Storm and the Cursed Mask lies before us. It clearly re-uses the Slide Stars engine and some assets, once again set in a waterpark, but the mechanics have been reworked so that it feels less like Trials HD and more like a typical action platformer. It appears to be aimed at a slightly younger age group too, using brighter, comic book-style, presentation.

The difficulty level is also far more lenient, with the new gliding skill mitigating the need to straighten up before hitting the water’s surface. Double jumping and the ability to spin-attack enemies re-confirm the new platformer-style approach.

Presumably because it isn’t exactly a brand-new experience, it’s available for half the price of Slide Stars – a modest £15.99, with 5% going to the charity War Child.

Mickey Storm and the Cursed Mask is a marked improvement, benefitting from a revised focus. The opening levels – which introduce us to the teenage spy Mickey Storm and his sister Jenny, along with their parent snatching nemesis Doctor Fisher – slowly establish the new mechanics, giving time to get acquainted. It’s then a case of dashing along flumes in a mangled waterpark, collecting precariously placed keys and batteries, dealing with the occasional boss, and taking part in checkpoint races.

Stages are short, each lasting around two minutes, but they’re high in number – 74 feature in total, spread across a handful of different locations.

Visually, it’s surprisingly slick – incredibly bright and vibrant, and the water effects are reasonably realistic; hit the surface hard, and you’ll plunge underwater for a few seconds. It definitely feels like you’re riding an inflatable, which we’d imagine isn’t the easiest of things to achieve.

Occasionally it even recalls the earlier Sonic the Hedgehog games, whizzing through loop-the-loops and soaring through the air. The thrill of being propelled across the screen at high speed can be exhilarating. Struggling to build momentum to get over a tricky gap when against a tight time limit, less so. Thankfully, checkpoint races only make up a small proportion.

The biggest problem here is that the backdrops and music don’t change often – a clear indication of a quick turnaround. Once entering a new location, the same BGM and trackside detailing is reused until entering the next world. The first two worlds are much of a muchness, leaving just the volcano world – with its ‘the floor is lava’ stages – to induce much-needed variety.

Ideally, each stage should have added something new. I do wonder if some younger gamers will find their interest quickly waning.

Whereas Slide Stars simply felt pointless, Mickey Storm and the Cursed Mask feels more in line with a modern-day cartoon/movie tie-in. A little slack in areas, and some obvious signs of asset recycling, but still capable of providing a few hours of light-hearted, inoffensive, fun. Parents looking to keep their kids quiet one wet weekend should keep this game in mind. It’s perfectly priced for such an occasion, too.
.
Mickey Storm and the Cursed Mask is out now for PS4, Xbox One and Switch