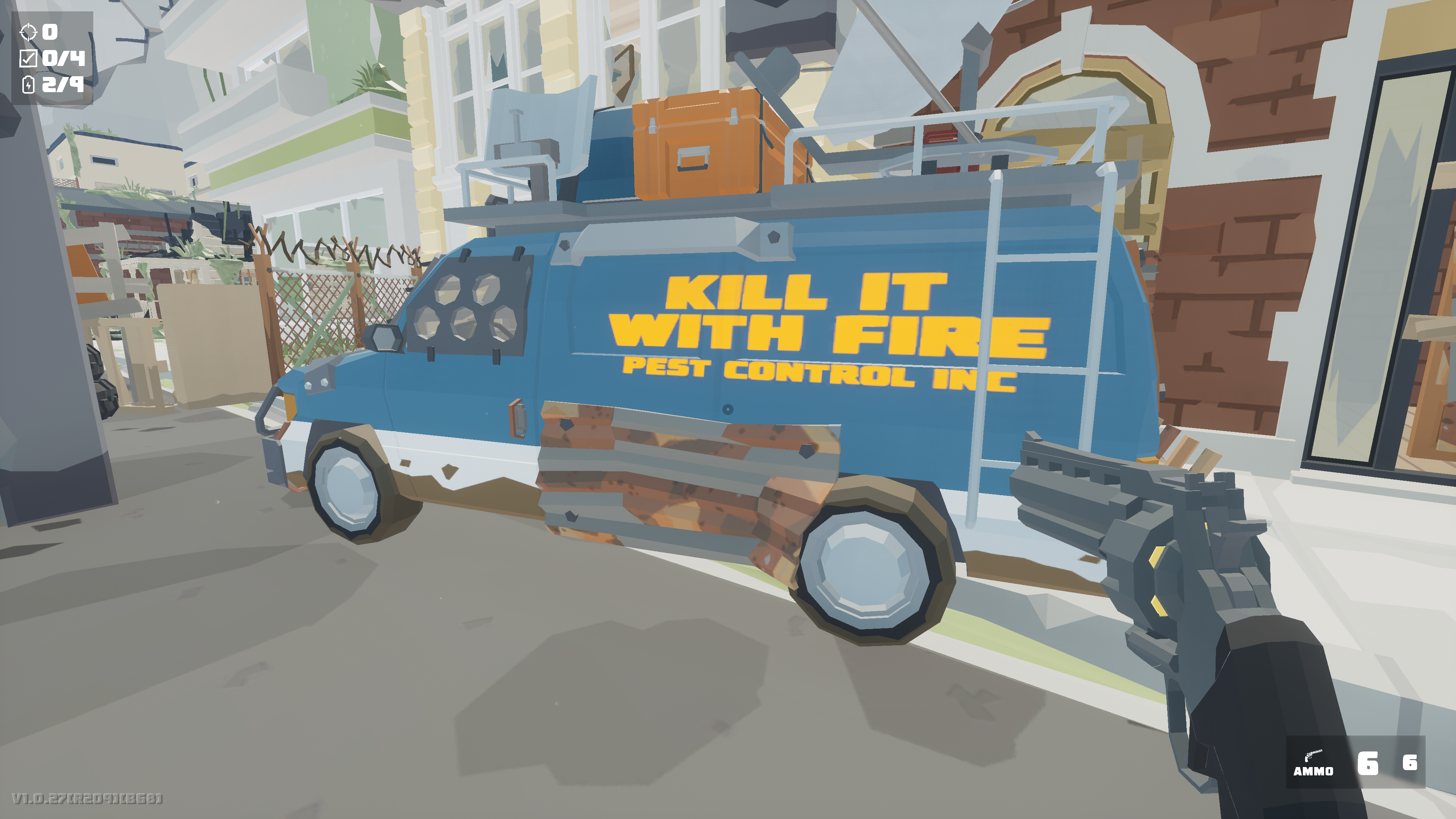 It’s always nice to discover a game has more depth than it lets on. Kill It With Fire sells itself on the idea of destroying spiders with flamethrowers, explosives and other delightfully over the top weapons. Pre-release screenshots even show a petrol station completely ablaze. Not only does it make good on this promise of wanton carnage, however, but it’s also surprisingly methodical and challenging, going as far as incorporating a few simple puzzles.

This low-poly FPS could easily jump straight into pulling out the big guns and razing everything to the ground. While this opportunity does occasionally arise, it’s also much smarter than this, being a slow-paced experience centred around exploration, resource gathering, and combat trials. A glorified game of hide ‘n seek, if you will, as the spiders are skittish and need to be unearthed before extermination.

It’s rare to see the blighters in the open, which lends a certain calmness to the start of each stage. By rummaging through cupboards, draws, bookshelves and more, the creepy crawlies eventually start to surface, requiring a few whacks or well-aimed shots to kill. The jumping spiders are genuinely unnerving, calling for precision aiming to take down mid-jump.

Ingeniously, a clipboard serves as a default weapon – the very same clipboard that shows a list of current objectives. These objectives must be discovered too, usually by finding memos while spider hunting. They entail all sorts – everything from combat-focus challenges such as killing two spiders with one shotgun blast, to cracking a safe or solving a similar puzzle. They can also be linked to certain weapons which, once again, you’ll have to find first by rummaging around.

A couple of quests are even humorously pernickety, such as gathering and correctly placing tools on a workbench, and ringing up exactly $100 on a cash register by shrewdly picking which items to scan.

The first few missions take place in small homesteads, eventually moving over to bigger locations such as the aforementioned petrol station. Rather than let you roam freely, each area is gated off, requiring a certain amount of kills to proceed. The spiders themselves ‘evolve’ (not literally, mercifully) as events unfold, varying from explosive types – which can trigger chain reactions – to invisible spiders which require a tracking device to find.

This device can be upgraded at the start of each stage, depending on whether you’ve gathered enough batteries – another item to look out for.

With no means of death or failure (outside of failing an optional trial), progression is easy going. Stumbling blocks are minor, like being unable to locate the last spider required to unlock the next area, which is presumably why the tracker tool was added. Challenge arises elsewhere – each stage has a tough spider splatting ‘Arachno-Gauntlet’ time trial which only appears after completing a stage 100%. To see the full ending, you’ll have to beat every gauntlet, ergo complete every objective.

Finding every available weapon may likewise require returning to past stages. While this may sound promising, Kill It With Fire’s fun is still short-lived – it only takes 2-3 hours to blitz through all nine stages, leaving just the extras. One benefit of this, is that the novelty value never has a chance to wane. Things are always kept fresh by the wide variety of challenges and locations, too. In fact, a few extra stages would have been appreciated.

While it lasts, this is a fun diversion, with a surprisingly well-implemented structure and more depth than Totally Reliable Delivery Service, Goat Simulator and other offbeat oddities.

Kill It With Fire, from Casey Donnellan Games, is out 4th March on PS4, Xbox One and Switch. It previously debuted on PC and mobile.

SCORE
7
Kill It With Fire