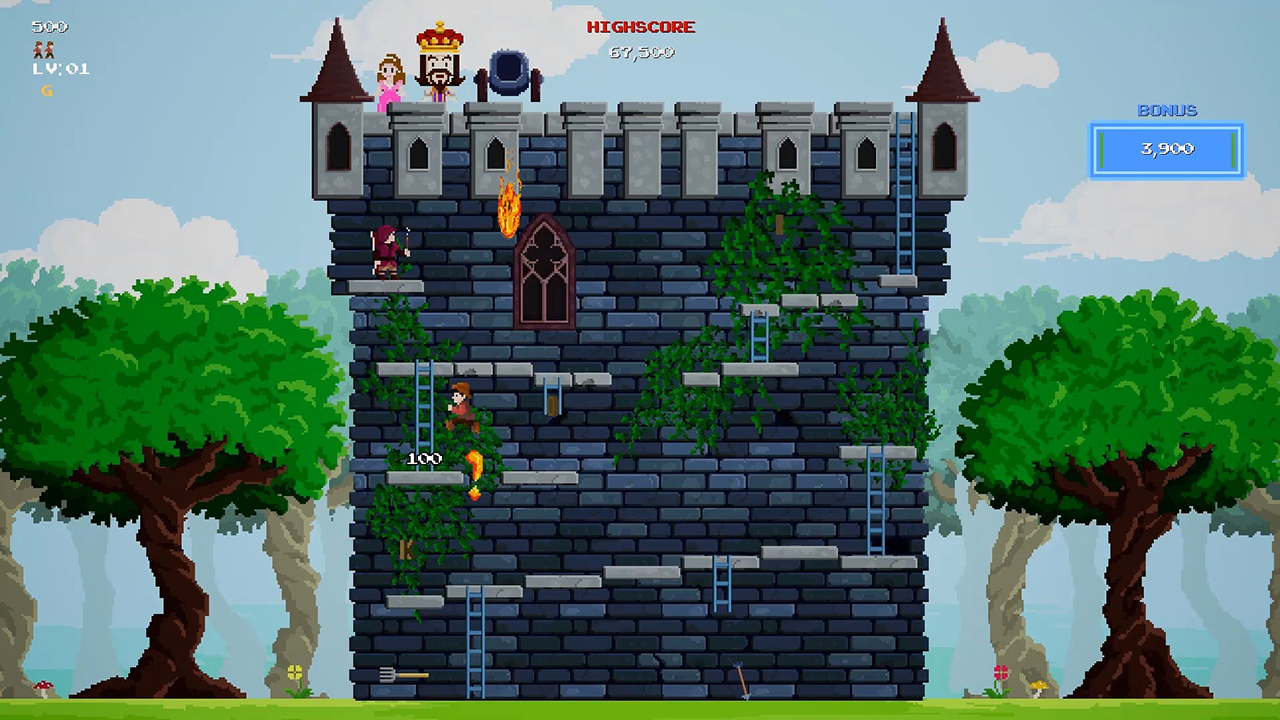 There’s no easy way to write this review without mentioning Donkey Kong, so we may as well get it out the way. Holding Nintendo’s breakout hit in high regard, developer Drowning Monkeys set about creating their own Donkey Kong-style single-screen platformer, mimicking not just the feel of the original but also its tough-but-fair difficulty level.

One thing it doesn’t copy is the game’s aesthetic. Castle Kong introduces a medieval theme with castle backdrops and an enemy roster including knights, archers, cannons, and a main villain known as BaronMan. This little farquaad becomes increasingly irate as you make progress towards freeing PrincessGirl from his clutches, shaking his giant noggin in disbelief.

It’s also more akin to a 16-bit game visually, complete with a sprinkling of faux-3D effects such as shaky platforms that give the illusion of depth. Menus are stark in comparison, using small white text on a plain black background. This Switch iteration does at least feature vertical orientation (read: Flip Grip support), in addition to an online leaderboard – an integral feature.

See, Castle Kong is centred around competitive play, challenging players to become king of the castle. Cash prizes are available for those within the top ten come 25th May 2021, while a bumper bounty is up for grabs to whoever reaches the kill screen first. At the end of each game, scores are submitted online, while the current top score is always shown on screen. Incidentally, score farming isn’t frowned upon, which opens up potential for finding exploits.

The beauty of Castle Kong lies in the fact each attempt is a learning experience. Over time, patterns become consigned to memory, enemy patrol routes are easier to predict and avoid, while pixel-perfect jumps can be achieved effortlessly. Learning from mistakes so that you can avoid making them next time around is part ‘n parcel, and every new screen (22 stages feature, spread across four locations) has a new layout to learn.

Due to the one-hit death system, every enemy poses a serious risk. Their routes successfully keep you on your toes – it’s impossible to guess whether enemies will descend ladders, or simply stroll from left to right. Panicking and jumping at the wrong time leads to many deaths – true to the original, it’s impossible to change direction while jumping. As soon as the button is pressed, you’re locked in. A pitchfork power-up helps to even the odds while collecting the precariously placed letters (which spell out KONG) bestows a hefty score bonus.

If you were to grab Castle Kong from the eShop without knowing about the cash competition, you may find it a little simple and throwaway despite its eye for uncanny detail. It is, after all, a simple refresh of a forty-year-old game and a little limited in what it has to offer outside of retro appeal. The addition of a cash prize for skilled players manages to elevate things considerably, however. Turns out the potential of winning some cheddar is an excellent motivator to knuckle down and ‘get good’.

Castle Kong is out now on Steam and Switch.