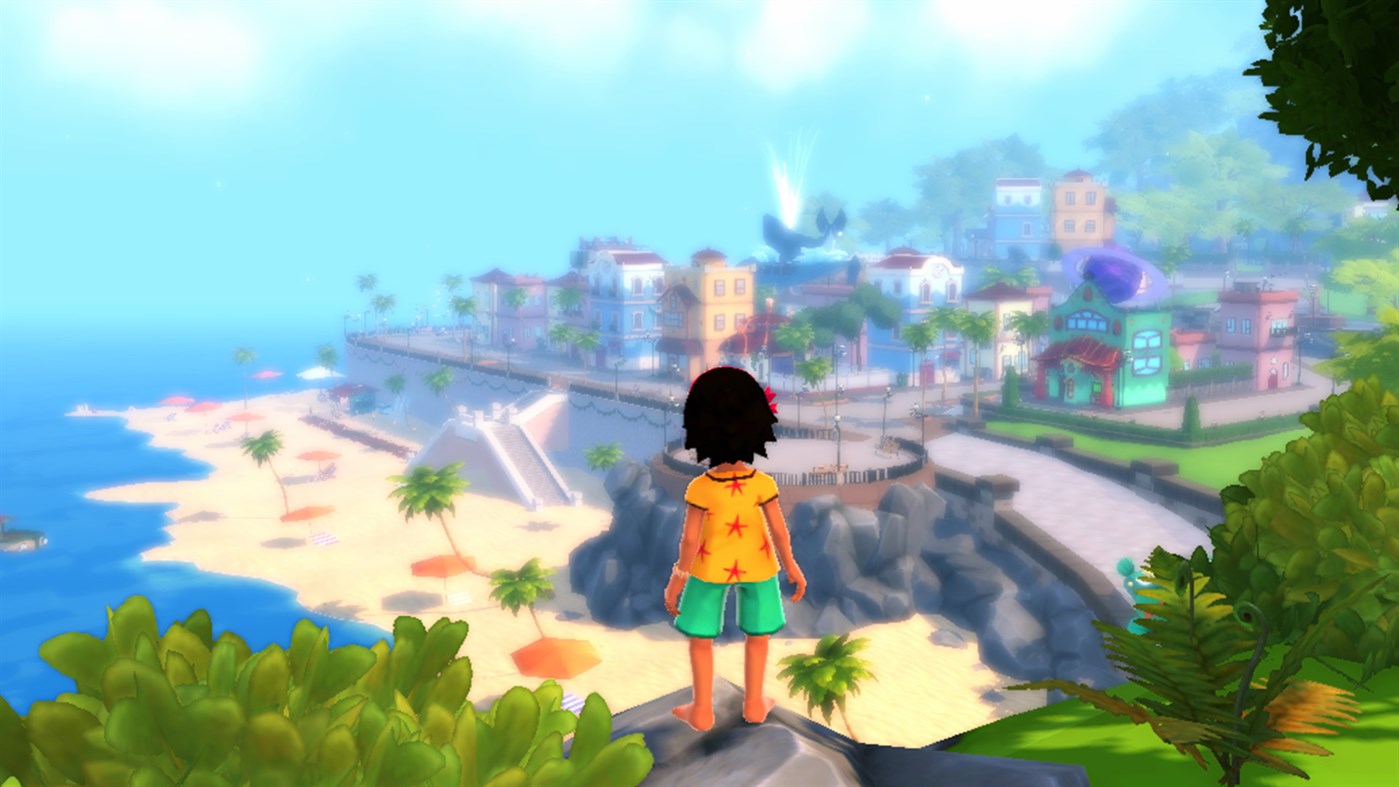 Cross-pollinate a farming simulator with a fetch quest game, expose it to sunshine, and you get Summer in Mara. You play as Koa, a young girl adopted by Yaya – a grandmotherly figure who found Koa lost at sea. After hopping into Yaya’s boat and skimming off across the seas to visit other islands, Koa offers her helpfulness to the various citizenry in order to learn what lies behind a mysterious door.

The story has themes we’re starting to see more regularly, such as restoring balance, giving back what you take, living in harmony with nature, and being kind and good to others. When it feels like there is so little we can do to change current situations, it’s easy to get lost in idyllic vistas you can shape to your own vision.

The effects of environmentalism show their hand a lot sooner than in other similar games, however. You expect a couple of countrified caveats, but Summer in Mara seems to be landlocked with them.

Wood is a regularly needed resource, easily gathered from trees for a small energy penalty. But if you chop a tree down before it has had a chance to spawn a new seed, you’re leaving your island in a deficit. Some trees will spawn fruit every couple of days, which you can make food and treats from to boost your energy and hunger levels. If you don’t plant more trees, say farewell to seeds and fruit.

Rain is infrequent and doesn’t follow a pattern. With no calendar to help keep track of things, it’s tricky to plan when to seed your plots due to limited water resources – namely a small stone well which is filled with natural rainwater. No rain, small gain – while crops will grow without water, they just take twice as long to reach harvest. On the other hand, a large part of me appreciated that you couldn’t fill your bucket at any old water source, since salt water is bad for crops in real life.

Fishing points have a finite number of fish in them, and once depleted you must wait an almost unreasonably long number of in game days – perhaps even weeks – for the fish to replenish. I lost count since there is no in game calendar.

The world is littered with items to collect. Again, these seem to respawn intermittently, with rocks and fruit respawning the most regularly, and shells and bait so infrequent that I was left wondering if I’ll ever see them again. There are times when progress bottlenecks behind quests, which pulls the pacing of the game off balance. One request given involves collecting six mollusc shells from the shore at the back of an island, but they never respawned after the first time I found them for another character. The alternative was to spend 96 coins on them each which is not viable for an 11-year-old protagonist who makes her money by selling carrots and catfish.

Despite these things, Summer in Mara has buckets of charm. The score is catchy to the point where I’ve woken up humming it, and the characters are varied with their unique personalities. Even though there is a lot of running around and sailing to and fro, you don’t mind. The upgrades to the boat make sailing faster and more fuel efficient, and the way the quests stack mean you’re often able to further multiple quest lines in one journey. Just don’t forget your offerings to Mara.

It has aspects of all the things you’d usually find in games of this ilk, from foraging to mining. But the big drawback is that if you take and take and don’t remember to make your offerings to the island Gods, you’ll only get junk back. Visiting a new island is exciting, providing a change of scenery, and it’s tempting to start hacking at all the new rocks you can see. Subsequent trips are less thrilling, yielding less stuff you actually need.

Summer in Mara seems so focussed on making you have this experience where you’re completely mindful of the impact your actions have on your environment, that it gets the balance of fun a bit wrong. That isn’t to say that it isn’t a mostly enjoyable game, but some things could be better explained or portrayed. Diving is a good example – it isn’t explained that you need a diving mask to go diving for treasures. Or you don’t need to go back home or to the boat if you’re out of energy and need to rest. If you’re carrying a sleeping bag you can just curl up like a caterpillar on the floor right where you are.

If the offerings to the island Gods have an impact on the island output of resources, maybe an on-screen indication of “how the Gods feel” would help, rather than haphazardly guessing what you must do in order to balance things out.

I felt quite often that Summer in Mara has all the eye-catching allure of games like Zelda: Wind Waker, but perhaps the developers missed some outside QA testing to make sure things were paced right or were clear to people outside of the project. You’re merely left to assume that certain aspects only work in certain ways. It’s still a pleasant experience, but an extra layer of polish would have made a less frustrating and sometimes time-consuming game frivolous and more enjoyable to play.

Summer in Mara is developed by Chibig and out now on Xbox One. Also available for PS4, Switch and PC.