The Amazing Spider-Man is more than living up to his name currently. The PS4-exclusive is the UKâ€™s no.1 for a second week running, fending off the multi-format Shadow of the Tomb Raider. 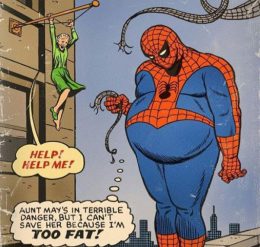 Lara Croftâ€™s latest was forced to settle for #2. While this placing may sound impressive, it isnâ€™t entirely good news.

Physical sales were down an alarming 70% over 2013â€™s franchise reboot, and were only slightly above Rise of the Tomb Raider – a timed Xbox exclusive.

Incidentally, and somewhat unsurprisingly, the PS4 version of Shadow of the Tomb Raider was the biggest selling last week.

LEGO The Incredibles clings in at #9, while finally at #10 itâ€™s Super Mario Odyssey.

PES 2019, Destiny 2: Forsaken, and Dragon Quest XI all dropped significantly, meanwhile. PES 2019 has fallen from #6 to #19, Destiny 2 went from #8 to #16, while Dragon Quest has plummeted from #2 all the way to #29. Erk! There is a chance that stock shortages are to blame for Dragon Quest’s swift descent, however.