For the record, I donâ€™t blame anyone. Describing Devolver Digitalâ€™s Absolver as â€˜an online fighting gameâ€™ is perfectly acceptable. It has a combat system that entails both close-encounters fisticuffs and sword fighting, complete with a fully customisable move roster, and it features 1v1 online battles in small arenas. Absolver is definitely a fighting game.

Only, it isnâ€™t. Not a typical one, anyway. Itâ€™s a bit like saying Shenmue is a fighting game because it features beatâ€™em up style mechanics during combat, when in fact the majority of time is spent running up and down streets and alleyways while stopping strangers to ask inane questions.

While I was aware of Absolverâ€™s existence long before it was a PS Plus freebie, the fact that critics described it as an online brawler stopped me from giving it more than a cursory glance. Western developed beatâ€™em ups tend to fall short when compared to those developed in Japan, often lacking in subtle nuances and favouring boldness and brashness. The online focus was also a cause for concern. No offline play? No sale. 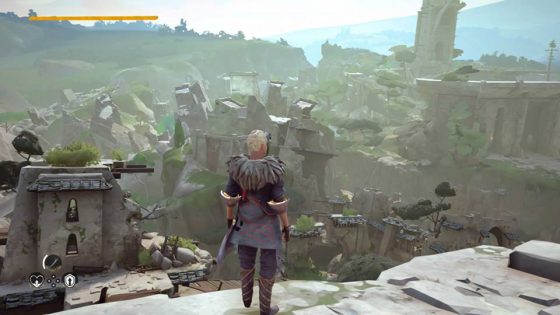 You can imagine my surprise, then, to find that Absolver has more in common with Dark Souls than a typical beatâ€™em up. It shares the same looping open-world structure, the AI behaves in a similarly aggressive manner, and all lore is provided by NPCs who speak in cryptic tongues. But unlike Dark Souls, Absolver doesnâ€™t demand an overwhelming chunk of your spare time â€“ taking around 5-6 hours to complete â€“ and it offers a fair and forgiving experience, going great lengths to ensure all and sundry can make steady progress. Which essentially means it isnâ€™t anything like Dark Souls.

If youâ€™re scratching your head here, allow me to explain: Absolver is Dark Souls in a super-condensed form. It shares the structure and many sensibilities, right down to the fact that some of the core mechanics are left to self-discovery, but itâ€™s much (much) shorter, easier and accessible. 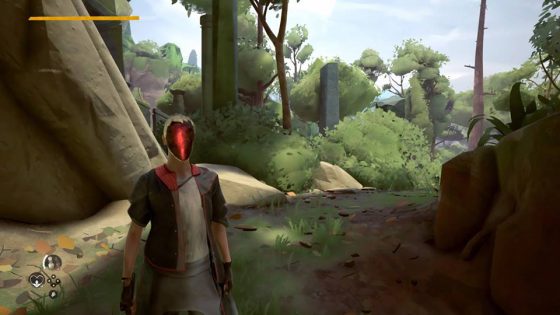 Youâ€™re cast into a long-forgotten realm; a destroyed civilization that nature has begun to reclaim. The task at hand is relatively simple: to become an Absolver by finding and defeating six marked targets. They can be tackled in any order, and the only assistance given is a map showing their vague whereabouts. Some are easily discovered â€“ one can be summoned by entering a ruined coliseum, for instance â€“ while others lay off the beaten path.

As you set about exploring youâ€™ll soon notice other players undertaking the same quest. They arenâ€™t â€˜hollowâ€™ or mere shadows â€“ itâ€™s possible to form a tag-team, or simply give a friendly wave. Taking down a trickier boss while another player keeps their goons busy makes life far easier. As youâ€™d expect though, some players can prove to be a nuisance, starting fights and such. Teaming up with helpful players to take down a troublemaker is rather pleasurable. 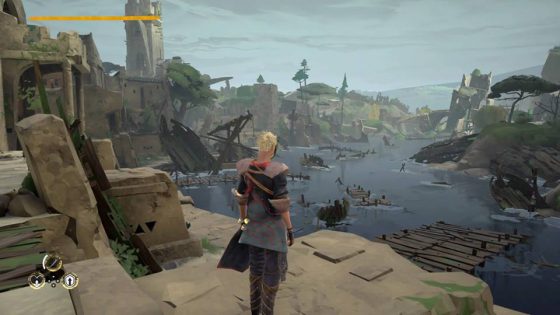 The online component extends to the aforementioned 1v1 matches. The fighting system is reasonably deep, allowing you to customise attacks by selecting openers and finishers, both of which drain certain amounts of stamina. Swords can also be used, predictably causing more damage. It isnâ€™t possible to pull out a sword at any given time, however, as a gauge must be filled first; knowing when to bring out the â€˜big gunsâ€™ adds a slight tactical slant. Furthermore, the opposition can also pick up discarded weapons. Magic features too, including an earthquake spell that stuns opponents, ultimately leading to some wildly unpredictable battles.

While the 5-6 hour runtime may seem somewhat alarming, Absolver is absolutely designed for the long haul â€“ the â€˜end gameâ€™ entails high-level PvP, complete with combat schools and new lengthier combos, plus taking on tougher opponents in the open-world in order to unlock rarer loot. If this sounds rather comprehensive for an indie game, youâ€™re correct. We may not be able to settle on a wholly accurate description for Absolver â€“ or at least, one that isnâ€™t an utter mouthful â€“ but one thing we can settle on is that it feels more like an â€˜AA gameâ€™ than an indie title.