Itâ€™s easy to see why Housemarque called upon the talents of Eugene Jarvis to co-create PSN hit Nex Machina. The celebrated game designer is responsible for some of the greatest arcade twin-stick shooters of all-time, including Robotron: 2084 and Smash TV.

Both are a clear influence on Circuit Breakers. Essentially, itâ€™s an amalgamation of the two, featuring small, boxy, predominately grey arenas filled to the brim with rampaging robots ripe for wrecking.

Sadly, developer Triverske seems to have overlooked what made these games great. It doesnâ€™t have the eccentric sense of humour or over the top violence of Smash TV, and it lacks Robotronâ€™s ability to send players into a mesmeric trance. All told, itâ€™s a pretty straightforward score chaser. 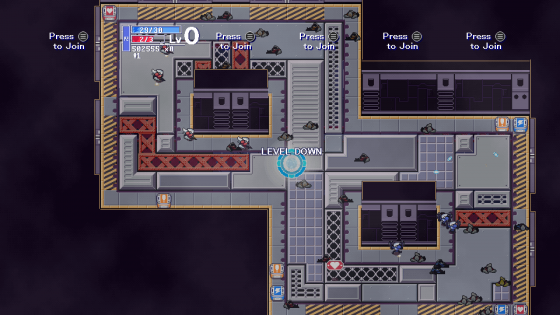 It does have some merits though. Thereâ€™s a choice of characters, each of which has their own weapon with varying ranges, spreads, and firing speeds. They also have their own challenge cards to work through. Ticking a few impromptu challenges off the list is mildly rewarding, bringing you one step closer to 100% completion.

While spending time with each character is diverting at first, chances are youâ€™ll find yourself sticking with just one or two. The machine gun and mini-gun carriers tear through enemies with much more haste than, say, Samson with his slow firing missile launcher. Tayâ€™s laser only fires in straight lines, while Shelbyâ€™s shotgun lacks punch. Pun-tastic character names, weâ€™re sure youâ€™ll agree.

Every weapon can be powered up, and this is achieved by collecting blue Energium crystals. Upgrades only last until the supply of Energium runs out, and so itâ€™s case of killing foes in quick succession to keep crystals flowing. Most areas have a box or two containing said shards, and itâ€™s a good idea to save these for when stock becomes low. 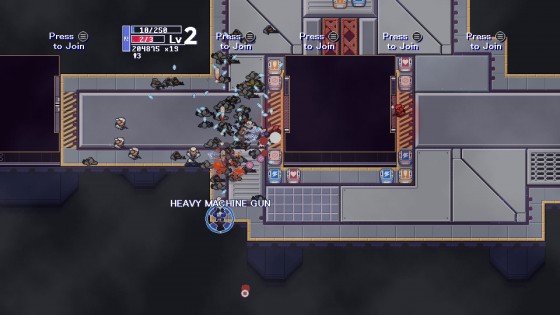 Once an unspecified criteria has been met (annoyingly, waves come to an end seemingly at random), itâ€™s a case of either making a beeline to the next room or staying behind to mop up any stragglers and Energium you may have missed.

As well as their own arsenal, every character also has a temporary shield. Itâ€™s impossible to shoot while using it, but you can collect Energium and move around the arena freely without fear of taking damage. Itâ€™s a handy little gizmo, and only by using it proficiently will you make it to the later rooms.

See, Circuit Breakers is forged from stern stuff â€“ it isnâ€™t punishing, or unforgiving, but even so most games come to an abrupt end. Unless playing with friends (local only, sadly) it can be tough to stretch a game out for anything more than ten minutes. 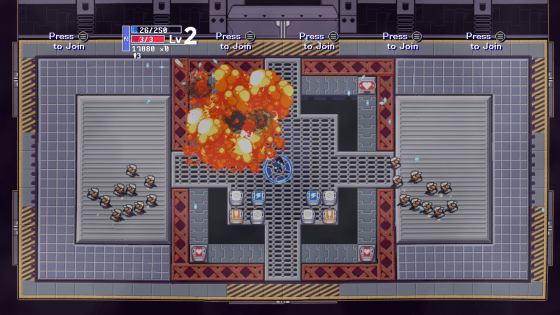 Being an arcade-like experience, youâ€™re thrown back to the first room every time you play. Thereâ€™s nothing to show for past feats and endeavours, and this affects the sense of progression massively. In fact, the aforementioned challenge cards are the most rewarding aspect. It also doesnâ€™t help that thereâ€™s a notable lack of pizzazz and spectacle, save for the occasional explosion. The sprites are too weedy and undistinguished to convey any sense of personality, and each backdrop is as drab as the last.

Circuit Breakers gets the fundamentals right â€“ the controls are responsive, co-op is mildly entertaining, and the game engine can cope with countless enemies on screen at once â€“ but it doesnâ€™t offer anything more than the bare basics of any twin-stick shooter.

Try as we might, we just couldnâ€™t get into that oh-so elusive zone here.