Monomi Parkâ€™s slime nurturing sim possess one of the most important hallmarks of video game excellence: the ability to make hours fly by like mere minutes.

This is mostly achieved via the shrewd inventory management system. Thatâ€™s shrewd from a design perspective; from the playerâ€™s perspective, the small amount of backpack storage makes for a lot of busywork, diversions, back tracking, and advance planning.

Some 10 hours in, we were still unlocking new stuff

Like Harvest Moon and Minecraft before it, this is very much a game for those who like to keep themselves busy. The more you play, the more your â€˜to doâ€™ list grows. Some 10 hours in, we were still unlocking new stuff to mess about with and hadnâ€™t even touched the challenge mode.

The opening hour or so is mostly centred around exploration, as you work through the tutorial and get to grips with the slime vacuum â€“ the only means of interacting with the colourful creatures that inhabit the dusty plateaus, underground caverns, and overgrown wildernesses. The vacuum is far being from a precision instrument. Quite the opposite, in fact â€“ it often sucks up unwanted items, pulls vegetables out the ground, and sends slimes spinning through the air. While this may sound irritating, the sloppy and unsophisticated nature is what makes to such a fun and inviting tool to use. 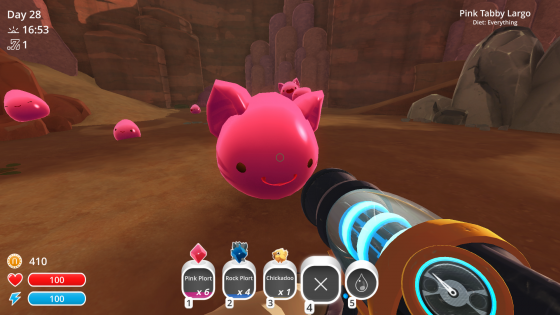 The game world is one thatâ€™s fully alive, complete with a day and night cycle, wild plants that regenerate over time and hapless feral slimes of varying types. An evil slime-scoffing entity can also appear without warning. Their existence appears not to be down to keeping players on their toes, but rather to keep the slime population under control. If left to their own devices, slimes will rapidly reproduce, eat everything in sight, consume other slimes â€“ evolving into new variations as they do so â€“ and generally cause a right old ruckus.

coming across a new slime variation is genuinely exciting

This is where you come in, playing as Beatrix LeBeau â€“ the proud owner of a new slime ranch. Why collect slimes and keep the population in check? Because they produce valuable crystals if fed the correct foodstuff. These crystals, known as Plorts, can be exchanged for Newbucks â€“ the currency used to build and upgrade the ranch, construct temporary gadgets and gizmos, and improve Beatrixâ€™s vacuum, shields and such. In short, thereâ€™s a lot of stuff to blow your hard-earned bucks on.

To begin with, youâ€™ll probably be perfectly content to head out into the wild and collect Plorts from feral slimes. Exploration is actively encouraged â€“ hidden paths are numerous, some only accessible via jetpack â€“ and coming across a new slime variation is genuinely exciting due to the prospect of being able to capture, evolve and ultimately harvest their valuable Plorts. Thereâ€™s a rather ingenious changing economy to keep an eye on too. Over time the commonly found Plorts become less valuable, so you need to start looking further afield to find more elusive slimes. 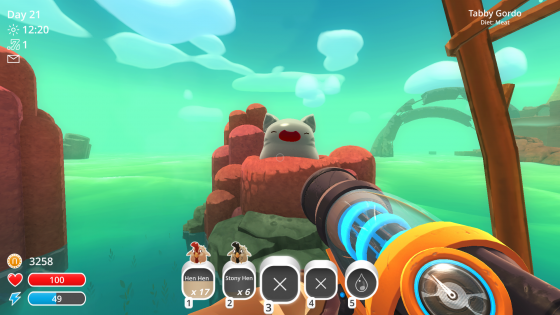 Once a small amount of Newbucks have been acquired, itâ€™s then time to start building and planning the ranch. By gathering resources from the wild, itâ€™s possible to start growing fruit trees and vegetables. Chickens can be bred and raised in coops (certain slimes are carnivores â€“ shock!) while the slimes themselves are kept in upgradeable corrals. Itâ€™s your call as to whether to keep slimes segregated or mixed. They tend to evolve into weird and wonderful variations if kept in mixed communities, but you may see certain slimes dwindle in number by doing so. The pink slime is the most common, incidentally; the golden slime the rarest, only appearing at certain times.

Itâ€™s wise to keep as many slimes in captivity as possible and keep a steady stock of their favourite food nearby. This is where good old inventory management comes into play. To begin with, only four items can be carried and just twenty units of each. Bear in mind here that the typical ranch will soon grow numerous veggies, fruits, livestock, and various slimes each producing their own unique Plorts. Heck, just carrying back Plorts to the cash exchanger soon requires multiple trips. The bigger the ranch grows, the more time consuming it becomes to reap what you sow. 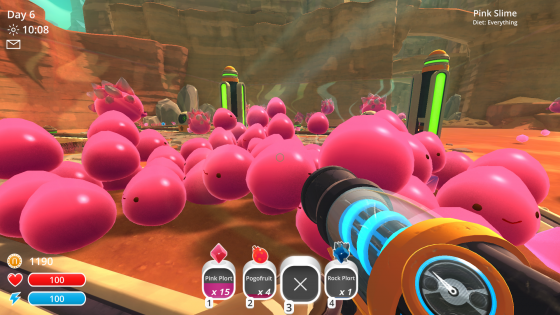 Knowing this, the developers have implemented numerous ways to try and keep grafting and back tracking to a minimum. Teleporters start to appear in the wild, and eventually the wildlands loop back round due to the ranch having multiple exits. They require unlocking first, though â€“ giant slimes bestow keys, but will only cough them up after theyâ€™ve been fed copious amounts of food. Corrals can be equipped with auto-feeders and auto-harvesters too, but these are not only costly but have to be kept topped up and emptied. Silos meanwhile can be used to contain surplus crops.

one of the best family-friendly games on Xbox One

The amazing thing is that Slime Rancher, on the first inspection, felt a little too much like a tech-demo and rather aimless. As soon as it came to planning the ranch though, these feelings soon lifted and an impeccably designed experience emerged. Just when you think youâ€™ve seen everything on offer, a new area, upgrade or gadget will become available. It’s one colossal, surprise filled, timesink.

Slime Rancher isnâ€™t just one of the best ‘Games with Gold’ freebies – itâ€™s one of the best family-friendly games on Xbox One. Any parent in need of a break from Minecraftâ€™s irritatingly jaunty music and tiresome dirt-scratching sound effects would do well to introduce their little ones to the adventures of Beatrix LeBeau. Suck it and see.