Ignoring the fact that a whole bunch of Monty Python games were released during the â€˜90s, Ohâ€¦Sir! The Insult Simulator is essentially Monty Python: The Game. It even uses the famous ex-parrot scene as a scenario for an insult slinging stand-off. The only cause for concern here, outside of using Monty Python references a little too heavily, is that some in-jokes may go over younger gamerâ€™s heads.

Which begs the question: isnâ€™t it about time Monty Python was added to the national curriculum?

Anyway, we digress. Ohâ€¦Sir! The Insult Simulator is a halfway house between a word and party game. It isnâ€™t as po-faced as most word games, but neither does it have a fast pace to match a typical party game, as most matches last around ten minutes. The set-up is similar to that of a fighting game though, due to the presence of beatâ€™em up style health bars and the ability to form combos. 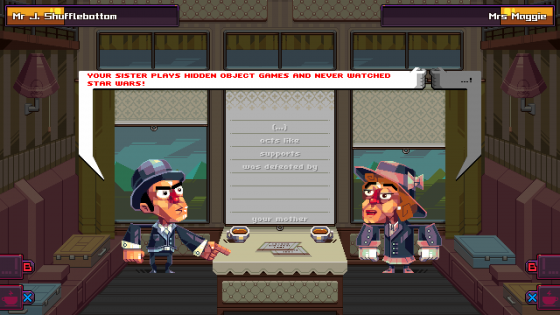 A choice of quintessentially British characters are available. In addition to a stiff upper lip, each has a weakness (age, sense of style, wealth, appearance and weight, etc) to find and exploit. Additional characters can be unlocked by playing through the five-stage tournament mode too, including a guest appearance from a video game character whoâ€™s managed to elude the spotlight recently.

Each insult battle involves a different scenario and basically boils down to carefully picking words, sentences, and phrases from a small pool. Every insult begins by selecting an object or person (your mother, your house, your sense of styleâ€¦) and must be followed up with something cheeky, rude or downright daft (â€¦smells of, supports, doesnâ€™t likeâ€¦) before finishing off with something insulting (â€¦a cheese shop, a lumberjack, a hamster). Sentences with exclamation marks can only be used at the end of an insult, serving to add extra clout.

As well as picking words from a shared pool, each character has two sentences exclusive to them which can be rerolled once per turn. Three health points are deducted upon using bad grammar, and if itâ€™s impossible to finish off an insult then your character will simply mutter and mumble, dealing no damage whatsoever. The game is fully voice acted, and although the truncated sentences do occasionally overlap due to the â€˜cut and pasteâ€™ nature of each insult, the slightly robotic tone does add a certain something. Itâ€™s a bit like messing around with a text-to-speech program. 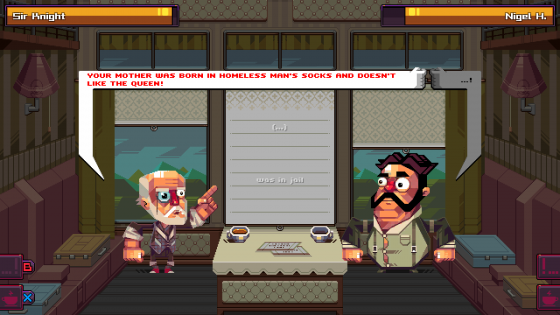 So far so simple. Now hereâ€™s the twist: it isnâ€™t always the longest insult that causes the most damage. Staying on a topic can deal a vast amount, while talking about the same subjects builds up a combo. Selecting certain words and phrases before the opposition can break their combo chains, and itâ€™s also a good idea to try and plan ahead â€“ i.e. making sure there are suitable means to finish an insult.

Short and snappy insults can turn a battle around single-handedly

Short and snappy insults can turn a battle around singlehandedly. A good example here is the golden oldie, â€œYour mother is your father.â€

An achievement can also be had for using the zinger, â€œYour country is no longer part of Europe.â€

Not every insult is golden, however. Despite characters bringing their own unique topics to the table, the vocabulary is rather limited. The CPU often resorts to using such nonsensical insults as, â€œYour mother was born in your liverâ€ and â€œYour hovercraft smells like some old dog.â€

Coupled with a slow pace, this can make some battles feel long and drawn out. The CPU does at least become more articulate during the tournament modeâ€™s later stages, constructing long insults by skipping turns and rerolling the word pool. The use of present day references is equally pleasing with both Overwatch and PokÃ©mon Go getting a mention. The corker that is, â€œYour mother can be found in PokÃ©mon Go.â€ managed to induce a wry smile. 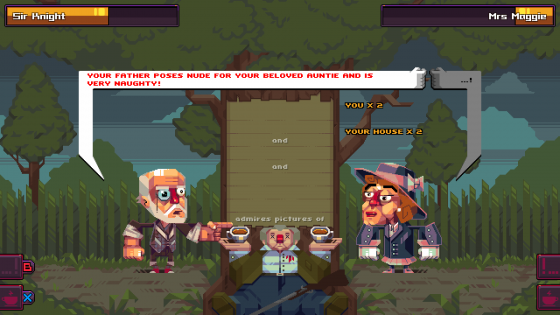 As well as the tournament mode, thereâ€™s also the ability to play online â€“ something we didnâ€™t expect given the meagre Â£2.39 asking price â€“ and a couch-based multiplayer mode. You can jump straight into an instant one-off battle too.

Elsewhere the gameâ€™s mobile roots are showing, especially when it comes to the barebones presentation. That said, the art direction isnâ€™t without merit due to the characters having an angular and abstract design. They also pull some rather amusing faces when unleashing heavy hitting insults, with Mrs Maggieâ€™s eyes bulging and tongue waggling like something from the pages of The Beano.

Like a small child telling you the same joke over and over again, Ohâ€¦Sir! The Insult Simulator grows tedious quickly. Regardless, itâ€™s still a game thatâ€™s too daft not to like. For those looking for something a little different, silliness awaits.