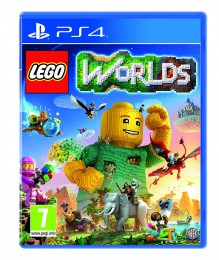 Horzion Zero Dawn dropped to #2 – with sales down 60% over launch week – while the budget-priced LEGO Worlds debuted at #3. We spent some time with TTâ€™s take on Minecraft over the weekend and were left impressed. Itâ€™s playful and innovative, complete with a cheeky nod to Puggsy â€“ one of TTâ€™s first games.

Zelda: The Breath of the Wild fell to #4 during its second week, with sales down 70%. Considering copies are allegedly hard to find, especially on Wii U, thatâ€™s still a placing for Nintendo to be proud of.

GTA V is still hanging around, this week at #5. Then at #6 itâ€™s the very well-received NieR: Automata. We had to visit three different branches of GAME to find a copy, suggesting demand was higher than expected.

Bomberman R meanwhile dropped from #7 to #21.

The 3DSâ€™ Mario Sports Superstars was the only other new arrival in the top 40, dribbling in at #37.