Like most shmups released in the past twenty years, Ghost Blade has a gimmick. Itâ€™s one thatâ€™s rather simplistic when compared to Ikarugaâ€™s reversed polarities, or examples of the genre that bestow extra firepower when flying closer to enemies, simply giving the chance to focus the standard spread-shot into a single beam at the cost of reduced manoeuvrability. While far from innovative, it does help Ghost Blade to feel ratherâ€¦focused.

Fans of the genre may have heard, or even played, Ghost Blade before â€“ it was released on Dreamcast in 2015 as a homebrew/non-commercial title with a very limited print run. Despite being aimed at a hardcore demographic, some reviewers noted that it felt like a good place for genre newcomers to start. Two years on and one HD makeover later, this remains true. 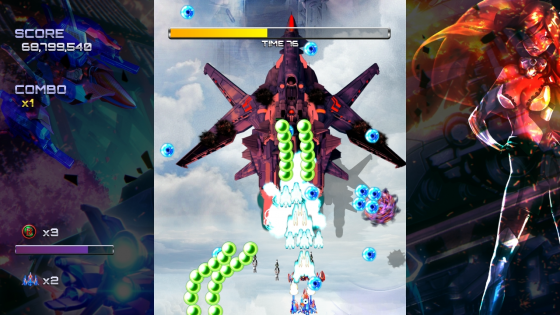 Ghost Blade is instantly likeable, boasting vibrant visuals, detailed backdrops and an excellent soundtrack that fits the fast pace superbly. While we canâ€™t vouch for the Wii U version, the framerate never falters on Xbox One â€“ the screen is constantly filled with collectables, enemy craft, and pretty explosions yet the action remains silky smooth throughout.

Moreover, the difficulty curve is masterful, with the five stages becoming progressively tougher. The final stage is appropriately challenging, especially on hard mode, demanding strategic bomb usage to make it through to the end. An extra continue is added to the pile upon being faced with the dreaded Game Over screen, and so given time, even novice players will find themselves with enough continues to eventually emerge victorious. 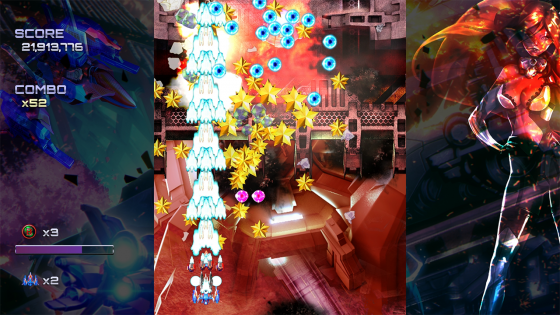 Due to the brevity of the levels, enemy locations quickly start to become memorable. The achievement for finishing a stage with no misses unlocked way sooner than expected, somewhere around our third playthrough. The achievements/trophies do add quite a bit to the experience, going some way to compensate where Ghost Blade falls short the most. To wit: itâ€™s an experience thatâ€™s over all too soon.

The five levels are brief and their bosses â€“ which vary from a large robot to an armoured train – are easily defeated, resulting in a run-time of around 15 minutes. While arcade style shooters are rarely known for their length, most tend to last twice as long. Easy mode can be beaten after around two hoursâ€™ worth of attempts, and by this point youâ€™ll be well on your way to mastering the other two difficulty settings, leaving just â€˜score attackâ€™ mode. 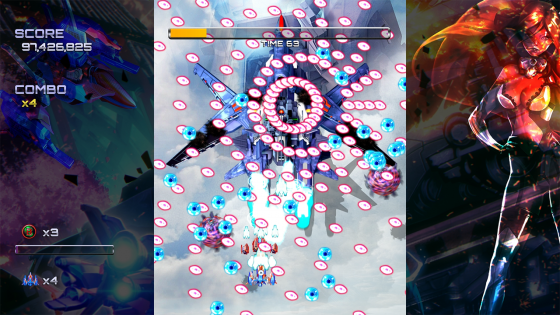 Itâ€™s telling that Ghost Blade comes from a small team: itâ€™s focused and refined, and like all passion projects it has clearly had a lot of time spent on it, but it does lack the fundamentals that weâ€™ve come to expect. Thereâ€™s no plot aside the premises to destroy an AI life-form turned rogue â€“ the three female pilots donâ€™t even have a backstory â€“ and thereâ€™s a complete lack of hidden/alternative paths and mid-level bosses. This is a very straight-forward shmup, albeit one thatâ€™s instantly gratifying.

Raiden V and Sky Force Anniversary definitely have the upper hand when it comes to content, but as a budget option Ghost Blade is still recommended, offering a far more polished and entertaining experience than Solar Shifter EX and Teslapunk. Itâ€™ll assault your eyes and ears with it a riot of colour and electronic beats, while only leaving a small dent in your wallet.