Last week was an uneventful one for new releases, and as such this weekâ€™s UK chart follows suit with only a small amount of shuffling occurring in the top ten. 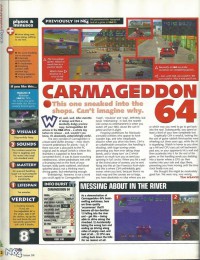 LEGO Star Wars: The Force Awakens remains on top for a second week running, Overwatch rises one place to #2, DOOM moves up to #3, FIFA 16 drops from #2 to #4 and then at #5 itâ€™s Rocket League.

Positions #6 through to #10 are then occupied by Uncharted 4, GTA V, Ratchet & Clank, Tom Clancy’s The Division and finally Call of Duty: Black Ops III at #10.

Fellow recent arrival 7 Days to Die meanwhile was far luckier, only dropping a couple of positions to #11.

The allegedly mediocre Carmageddon: Max Damage was the weekâ€™s one and only new entry, parking up at #22 in the top 40 and #16 in the Xbox One chart.

The belated release of LEGO Star Wars: The Force Awakens on Wii U did however take the top spot in the Wii U top 20.