If you can put down Pokemon Go for a while, youâ€™ll find that it’s a busy week for the UK eShop. The Wii U alone is on the receiving end of five new releases, while two retail downloads head to 3DS. Thereâ€™s a decent assortment of discounts, too.

At Â£19.99 Tumblestone on Wii U seems quite expensive for a match-three puzzler, but rest assured that it packs a lot of content, including local and online play, plus a story mode. Due to the asking price it’s still wise to wait for reviews, though. They should start to surface soon as itâ€™s also one of the Xbox Oneâ€™s freebies for this month.

The upcoming Star Fox Zero demo might be of interest even to those who already own the full game, as it also includes the animated short The Battle Begins. The demo itself features four training missions, showing off the Arwing, Landmaster, Walker and Gyrowing.

Thereâ€™s a Star Fox Guard demo as well, in which progress can be carried over to the full release.

As for the Wii U discounts, Curve Digital has dropped their back catalogue to mere pence. Nova-111, Olli Olli, Pumped BMX +, Stealth Inc 2: A Game of Clones, The Swapper and Ultratron will set you back 80p a piece, while Thomas Was Alone and Lone Survivor: The Directorâ€™s Cut drop to 83p and 87p respectively.

Incidentally, Olli Olli on 3DS is also due a drop to 80p from Thursday.

Wii U owners should also consider grabbing Guacamelee! Super Turbo Championship Edition while itâ€™s on discount – Â£5.99 instead of Â£11.99. We really enjoyed this Mexican-flavoured Metroidvania, awarding it a lofty 9/10 back in 2014. 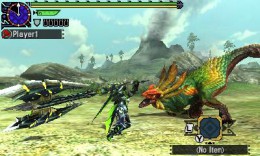 3DS fans have plenty to look forward to as well, including the currently review shy Monster Hunter Generations (Â£39.99). The digital release comes with an exclusive theme, entitled The Fated Four. We’ll round-up some reviews once they go live.