We were slightly worried that Dead Island Definitive Edition was going to claim the UK chartâ€™s top spot this week, dislodging Overwatch in the process.

Pleasingly, this isnâ€™t the case – Overwatch remains on top for a second week running. 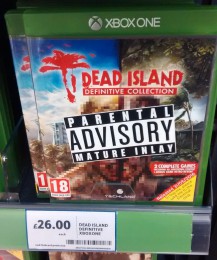 The Dead Island double pack has to make do with #5. Incidentally, Tesco has taken the liberty of censoring the box art. We wonder if this was a pre-emptive internal decision or due to customer complaints.

Then at #10 itâ€™s Homefront: The Revolution. Three weeks in top ten appears to be all the ragtag shooter is going to get.

Just a single other new release made the top 40 – One Piece: Burning Road at a lowly #37.

Recapping on other recent releases, TMNT: Mutants in Manhattan drops to #30 during its second week on sale while Battleborn falls from #20 to #29.

The Gearbox developed shooter can already be found for Â£20 online.