When describing Overwatch to somebody yet to sample its exuberant delights, it sounds rather simplistic. Alarmingly so, even. A 6v6 online shooter with a focus on teamwork, matches involve either capturing control points or escorting payloads to their destination. Teams take turns either attacking and defending, and aside a hybrid mode – which combines the two objectives – thatâ€™s all there is to it.

If any other online shooter launched with such a meagre set-up – and no campaign – the developers would be facing an online mutiny, but this is Blizzard weâ€™re dealing with. The very same Blizzard that gave us World of Warcraft, Diablo, Starcraft and Rock nâ€™ Roll Racing. Theyâ€™re renowned for releasing games only when theyâ€™re good and ready, and also for putting genre-defining twists onto everything they touch. Overwatch is no exception. Not only does it see on the online shooter rulebook re-written, but doodled upon with fluorescent markers.

The result is something thatâ€™s fresh and colourful, in both senses of the word. Itâ€™s great to see the industry moving away from the charcoal grey shooters that plagued the last generation. 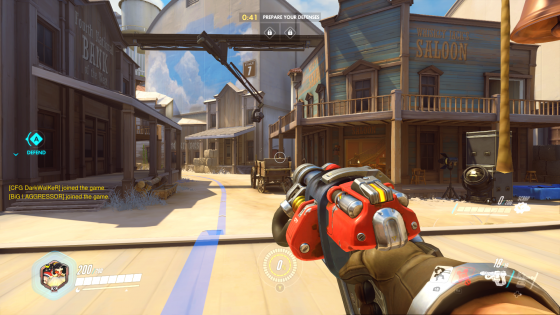 As mentioned, Overwatch shakes up the first-person shooting formula significantly. First and foremost, a grand total of 21 characters feature. Each plays differently from the last, with their own skills, passive abilities and personalities. Some are a little stereotypical, such as gruff cowboy McCree and the shuriken throwing cyborg ninja Genji, but these exceptions are few and itâ€™s more than apparent that Blizzard sunk a huge amount of time into character development. The cast is wildly diverse, including an unprecedented amount of female characters from all walks of life, complete with designs that break tradition.

Their skill sets have clearly been tinkered and tailored to perfection too, with some characters having surprising combinations. The popular Soldier: 76 is not only a proficient shooter, and able to unleash a barrage of rockets, but can also heal the team. Sprightly dwarf Torbjorn recycles scrap metal from fallen foes into armour that all team members can use, all the while notching up high kill counts with his upgradable turret. And contrary to popular belief, the teleport-equipped Symmetra can place turrets too. Her turrets are a tad more discreet than Torbjons, making this often unused character something of an underdog. 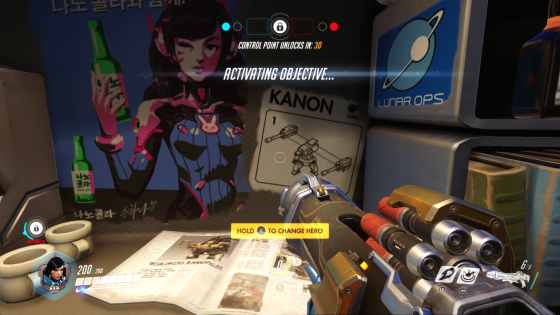 There are ideas present here that entire games could be based upon. In actual fact, they have in the past. D.Va stomps around in a mech which can be set to detonate when the things get hairy. Sound familiar? Chirpy robot Bastion can transform into a tank, while cockney Brit Tracer – a dead ringer for Eastendersâ€™ Stacey Slater – can rewind time, regaining any lost health. Once mastered, this makes her ideal for clearing out bases with minimum fuss.

Mastering characters is where Overwatchâ€™s depth lies. Well, that and unlocking all 54 add-ons – varying from speech samples to graffiti tags – for each character. The character roster is so vast that it took us three evenings of play just to sample a match or two with each. Everybody is going to have their own favourites, and over time youâ€™ll learn to swap characters as and when theyâ€™re needed. This is another one of Overwatchâ€™s slick tricks – characters can be swapped between when back at base. Itâ€™s also possible to have multiple characters per team – a whole squad of hirsute Swedish dwarfs, if you really wanted. 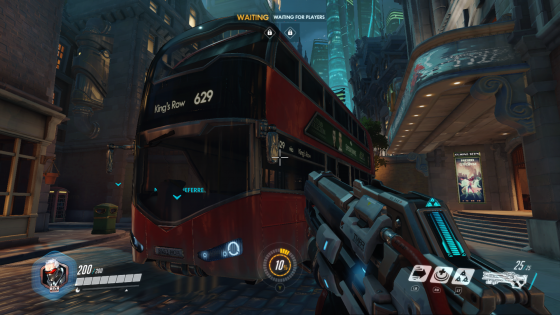 The focus is on keeping things balanced, of course. When assembling a team pre-match handy hints are provided to keep things even – itâ€™s wise to have a good mixture of builders, support, tanks and maybe a sniper or two. This is to insure players donâ€™t constantly stick to the same characters, although it has to be said that McCree, Soldier: 76 and Reaper are perhaps a little overused by players. Certain match types do however beckon for certain characters – Reinhardtâ€™s colossal shield makes escorting payloads slightly less of a struggle.

Over time the maps, of which there are 12, also start to become familiar. Every nook and cranny, no less – knowing where health packs are located is essential for prolonged survival. Upon dying players always respawn back at base, and although this has clearly been done to prevent players from randomly popping up all over the place, it does mean that there are some lengthy treks back to the objective. This is one of the few criticisms we can think of. 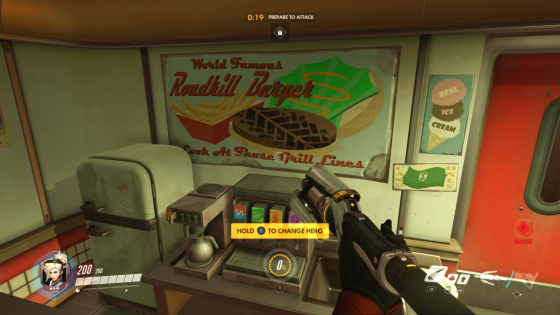 Set all across the globe, the maps are suitably sizeable and because some control zones are set inside indoor locations, while others are outside, a change in tactics is often called for. When protecting indoor locations, for instance, itâ€™s very easy for teams to dig in deep and fortify with turrets. The same canâ€™t be said when exposed to fire from above while outside. Before each battle time is appointed to either get ready to attack or defend, and excitement can often be sensed. Once the timer hits zero a messy, and pleasingly chaotic, assault often ensues. Death tolls are usually quite high towards the beginning and end of match, with a slight lull in the middle as players start to spread themselves out.

Not that the amount of kills really matters in Overwatch. Not in the same way as the vast majority of other shooters anyway; the focus squarely is on teamwork. At the end of each match the â€˜Play of The Gameâ€™ is shown to all players, based on an algorithm of who performed the most damage in quick succession or bestowed the most health points to the team at once. These short clips showcase some incredible feats and it genuinely feels rewarding when itâ€™s your character in the limelight. The next screen then sums up who had the most eliminations, biggest streaks, blocked the most damage and supported their team the best. 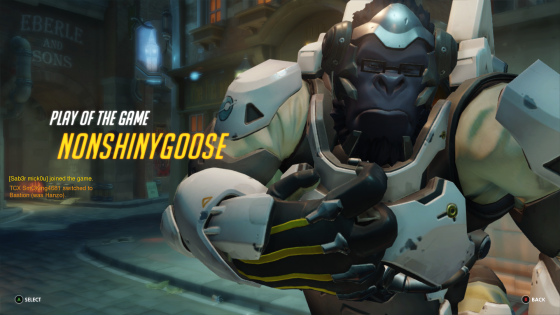 The chance to give these players a â€˜likeâ€™ to show your respect may sound like a trivial inclusion, but this system is actually something of a game changer. We once gained zero ‘likes’ for our 28 kill turret rampage; it was the player who constantly healed team members that walked away with the majority of â€˜likesâ€™ this match. It was at this point we realised that Overwatch players tend to reward others for genuine skill, rather than lazy victories.

Eliminations (read: kills) do come surprisingly easily – this is a game where players consider single digit kill tallies poor. The reason for this is that Overwatch does away with kill stealing – itâ€™s the player who causes the most damage to the opposition who gets the elimination point. You may take a few pot shots at a player, die, and then still be awarded the kill a minute or two later when that player eventually snuffs it. 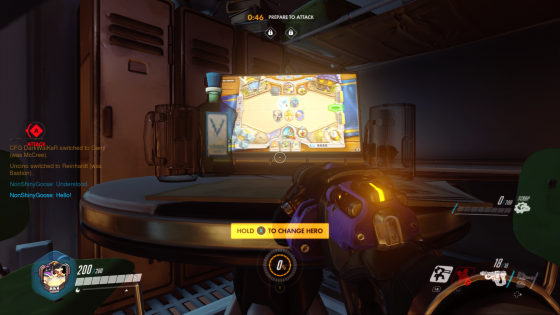 Another reason for high kill tallies is due to the presence of ultimate moves. Ultimates take time to charge and knowing when and where to use them takes skill and good judgement…and a bit of luck. Itâ€™s entirely possible to wipe out an entire team with one well timed attack. There are ways to block ultimate moves thankfully, such as McCreeâ€™s stun ability and Roadhogâ€™s Mortal Kombat style chain â€˜n yank attack.

Much of Overwatchâ€™s success lies within its balancing, then. It isnâ€™t flawless just yet, but as we all know Blizzard are no fly-by-nighters. Heck, World of Warcraft was released in 2004 and is about to receive its sixth expansion. Theyâ€™re in it for the long haul, and as such Overwatch can only get even bigger and better over time.