Kirby’s adventures tend to be hit and miss due the relaxed difficulty level the series is known for. Kirby: Planet Robobot – due on the eShop this Friday for Â£34.99 with a free theme – is easily one of the better outings for the pink hued dude however, with the majority of review scores coming in at around the 8/10 mark.

â€œOnce you spend time sampling the large selection of powers in each stage, taking in the detailed visuals, the catchy soundtrack, and exploring the wealth of extra modes on hand, you are so focused on the game’s pervasive charm that you’re looking forward to the next delightful surprise, rather than praying for a grueling test of skillâ€ said GameSpot.

One new Kirby game clearly isnâ€™t enough – Kirby’s Dream Course (Â£7.19) is also due on New 3DS VC this Thursday. We recall this one putting a pleasing enough spin on the crazy golf genre back in the day. It was at least on par with Putt and Putter on the Master System, anyway.

Those who have played through Fire Emblem Fates: Birthright and Conquest will no doubt be eager to download Fire Emblem Fates: Revelation (Â£17.99) – the third full campaign. Here, youâ€™re prompted to choose a side while taking in the storyline from different perspectives. Thatâ€™s joined by Map 6 – Royal Royale (Â£2.29), a battle to determine whoâ€™s the strongest sovereign of all.

Puzzle Labyrinth (Â£4.29) is the weekâ€™s only other 3DS release. Mazes, monsters, traps and puzzles – the trailer below gives a good idea of what to expect.

The Wii Uâ€™s Virtual Console releases meanwhile are PokÃ©mon Ranger: Shadows of Almia and PokÃ©mon Ranger: Guardian Signs, priced Â£6.29 a piece. Originally released on Nintendo DS back in 2008, these two put a action-oriented spin on the franchise by allowing players to trap Pokemon by drawing circles around the critters with the DSâ€™s stylus. Thatâ€™ll obviously be replicated here via the Wii U GamePad’s touch screen.

Also on Wii U: B3 Game Expo For Bees (Â£7.99), a parody of E3 with a saccharine twist. Playing as a security bee, itâ€™s your job to keep the convention hive safe from attackers by blasting them to bits. Could go one of two ways, this. 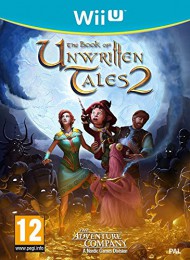 After disappointing gamers elsewhere in the world, low budget horror game Sanatory Hallways (Â£8.99) looks set to appear in a few different countries this week too, while Terraria (Â£17.99) finally makes its Wii U appearance.

This leaves us with The Book of Unwritten Tales 2 (Â£17.99) from good old Nordic Games. First released on PC, PS4 and Xbox One around a year ago, itâ€™s a pretty clever point â€˜n click adventure with plenty of humour. Itâ€™s also due as a physical release this week for around Â£15.

Unless mistaken, this is the first time FreezeMe – a 3D platformer paying homage to Super Mario 64 – has seen a price cut.