The best thing about the seemingly unstoppable indie uprising is that no idea is ever too offbeat. With no pushy publishers to appease thereâ€™s no chance whatsoever of a corporate suit stamping on a teamâ€™s creativity, demanding something more mainstream instead.

Developed by just four people, TurnOn has a concept thatâ€™s as weird and wonderful as they come – playing as a glowing spark, youâ€™re charged (no pun intended) with restoring power to a small town, lighting up lampposts and fixing fuse boxes while en route to the next generator. Itâ€™s a neat, and highly original, idea – the only thing we can compare it to is Kirbyâ€™s Magical Paintbrush (aka Kirby: Canvas Curse) but even then the differences are vast, similarities with our hapless hero aside. 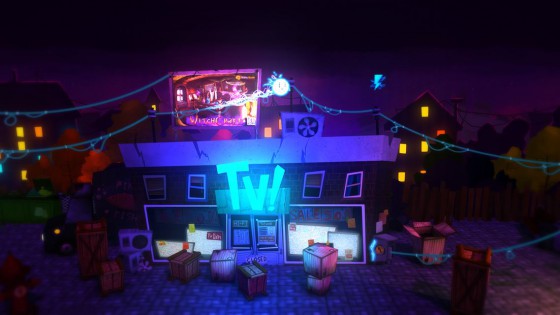 Thereâ€™s a rub, however – itâ€™s easy to get the impression that TurnOnâ€™s concept came first, and then the developers found themselves having to figure out how to create a game around it. Imagine a 2D platformer with no enemies whatsoever – just tonnes of collectables to find and some pixel perfect jumps – and youâ€™ll start to get a vague idea of how TurnOn plays.

The nameless spark traverses the townâ€™s power lines, with a field of movement restricted to leaping in and out of the background and foreground. Occasionally youâ€™re forced to make a leap of faith – time a jump badly and the spark will hit the ground and fizzle out – and thatâ€™s about it for exploration. This makes gaining a three star rating on each level, achieved by reinstating power to every building and finding the majority of collectables, an almost effortless task.

Thereâ€™s very little in the way of environmental hazards either, save for an early level where a pesky drone has to sent to the scrap heap. We expected the difficulty level to move up a notch from thereon in, but no – it didnâ€™t rise again until the final few levels. 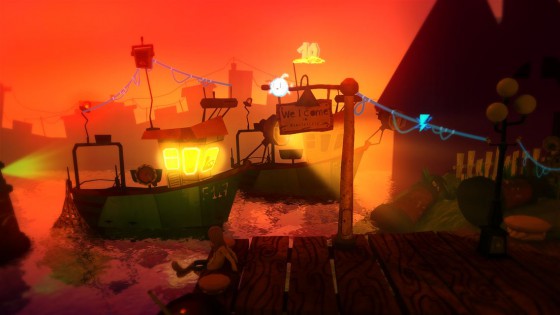 Yet despite TurnOnâ€™s linear nature every level is different from the last as they all have their own focal points. A citizen in help, usually. It turns out our nameless hero is both compassionate and caring, doing whatever he can to help those affected by the blackout. In most instances this is achieved simply by progressing through the level, activating burglar alarms to scare off looters and turning on traffic lights to get motorists moving again, but there are a few exceptions.

These include stopping a spinning Ferris wheel by avoiding obstacles to reach its centre pivot, and helping a young romantic woo his girlfriend by getting a radio station back on air and setting the scene with some soft lighting. Queue the fireworks!

Indeed, this is a game with heart and soul which in turns gives it an elusive feel good vibe. The smooth jazz soundtrack definitely helps sway things in the gameâ€™s favour here, too. These positives help TurnOn to entertain for its entire 3-4 hour duration; we always wanted to see what situation the spark would land in next, and the stylised visuals – with their outlandish colour schemes – are pleasing on the eye. 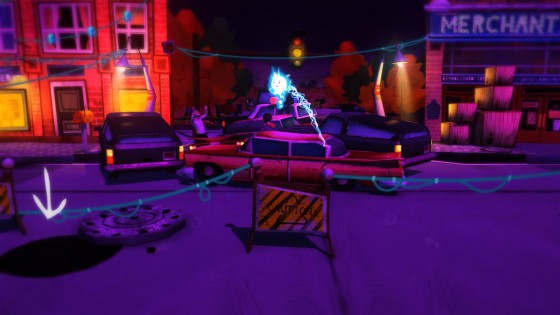 Thereâ€™s just no shaking the fact that this isnâ€™t a particularly challenging experience, which – again in turn – doesnâ€™t make it feel hugely rewarding. Most levels can be completed with little to no fuss or frustration. You may fall to your doom a few times during the auto-scrolling levels due to delayed controls, but theyâ€™re still relatively straightforward once the sense of timing has been mastered.

Itâ€™s a bit of a shame, really. TurnOn is a clear labour of love, and the idea of helping people during a blackout holds much appeal. It just so happens that helping others doesnâ€™t make for a thrilling, or challenging, gaming experience. Not in this instance, anyway. Those looking for something that wonâ€™t tax or frustrate – a chilled experience, if you will – may want to look into this. Weâ€™d happily recommend it for younger gamers too, thanks to its non-violent nature. Everybody else should consider it a curio.