When playing through this month’s Xbox One freebie, all we could think about was what it could have been rather than simply enjoying whatâ€™s on offer. Over time even the minor irritations – of which there are many – started to frustrate more and more, right until the point where we began to forget all about the few things it does rather well. We know this is a pretty damning way to begin a review, but ZHEROS is easily one of the worst games weâ€™ve played in quite some time.

Visually itâ€™s initially appealing; the animation is smooth and there are some pleasingly subtle motion and distance blurring effects on show. The assortment of oddball alien enemies is reasonably large too, with new types introduced every two or three levels, and there is some satisfaction to be had from destroying large crowds of enemies in one fell swoop. For a while, at least – tedium starts to settle way too soon. Alas, this is the least of the gameâ€™s problems. 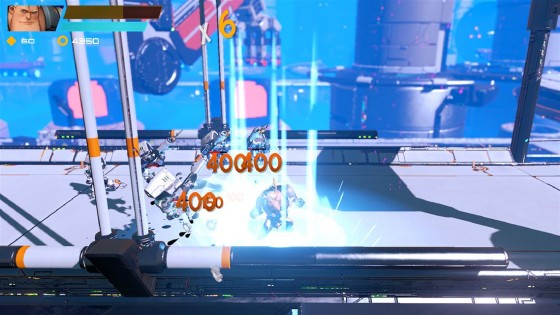 The intro shows main villain Dr. Vendetta – a man with a very profound taste in headwear – launching an army from the comfort of his gigantic computer chair. After the first batch of enemies are quickly destroyed by the ZHEROS, Dr. Vendetta then presses the â€˜Send more armyâ€™ button on his keyboard. Unbelievably, this is the only cut-scene in the entire game until the final confrontation with the doctor himself. This means no cut-scenes between levels; not even a few still images. Literally nothing – no further plot twists, no character development – nothing. One level ends, and then it’s off to the next.

In fact, the ZHEROS themselves arenâ€™t even formally introduced. Youâ€™re simply left to assume that theyâ€™re some kind of intergalactic peace keepers. Mike is the stronger of the two, providing brawn over brain and collapsing with exhaustion at the end of every stage due to sheer size, while Dorian is light on her feet but slightly weaker, preferring to use her feet rather than fists. After picking a character thereâ€™s no way to swap between the two, which is an incredibly odd choice. Youâ€™re forced to stick with your chosen character for the entire 3-4 hour duration. The other character doesnâ€™t even show up from time to time – they arenâ€™t seen or heard of again until the ending scene. 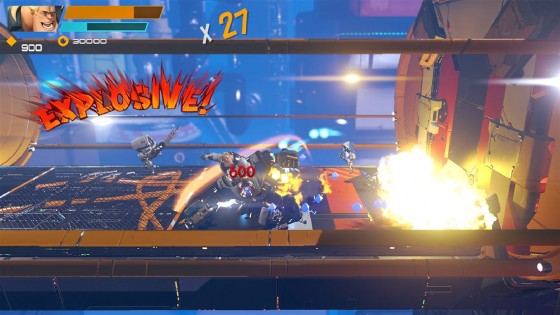 As much as weâ€™d like to tell you more about these two characters, their personalities arenâ€™t expanded on in the slightest. Thereâ€™s no voice acting whatsoever, so no witty one-liners or corny catchphrases. This brings us onto the next major issue – the atrocious audio. Most levels take around 10 minutes to finish but each music track only lasts around 30 seconds, playing continuously on loop. Itâ€™s enough to drive a sane person insane. We swear some sound-effects are missing too, as the heroes remain silent when getting zapped by electric floor panels or fried by fire.

At least the combat system is half decent, with each character having a fair few different combos. When up against the larger enemies – which include robot cows that spray green ooze from their udders – itâ€™s essential to block and evade their heavy hitting attacks to avoid an early grave. Itâ€™s possible to deflect laser blasts by raising the shield just at the right time, as well, which is mildly satisfying. With each and every upgrade the lead characters grow notably stronger; enemies that took several wallops to beat can eventually be destroyed with just two or three hits. So there is at least some sense of progression on offer, even if the game is severely lacking in other areas. 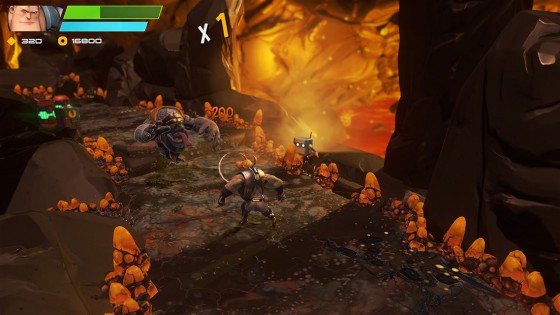 The level design, or rather the lack of it, is a fine example. Aside a level where a large shutter has to be closed to prevent taking damage from a raging inferno, there are no interactive elements to speak of. Most stages are formed of long stretches of narrow platforms, occasionally punctuated with a moving lift or makeshift staircase. Over time the levels start to blur into one another; even the obligatory level set on a moving train fails to standout, and although there are some boss battles they each have very similar attack patterns. We had no trouble beating them on the first attempt due to the vast amount of health packs dotted around the outside of the battle arenas.

It doesnâ€™t present you with challenges; it presents tests of patience

Due to poor design, there were three instances in particular that had us grinding our teeth and shaking our heads in dismay. Level 1-5 introduces some platforming elements, and while we usually welcome a change in pace, the delay in jumping made us wish for more mindless fighting. After dying several times and being abruptly thrown back to the checkpoint (one shot per platform jump is all you get), we then discovered that youâ€™re supposed to jump while running. And how is running performed? By clicking in the left analogue stick – a manoeuvre we had to discover for ourselves by reading the control list.

The experience point system is another element that isnâ€™t explained properly. A maximum of two upgrade tokens can be gained per level, each dependant on collecting yellow gems stashed inside breakable orange boxes. Because this isnâ€™t explained, we played through the first five levels blissfully unaware that we should be breaking every orange box in our path. With hardly any upgrades we started to struggle against larger foes. Frustration naturally followed. 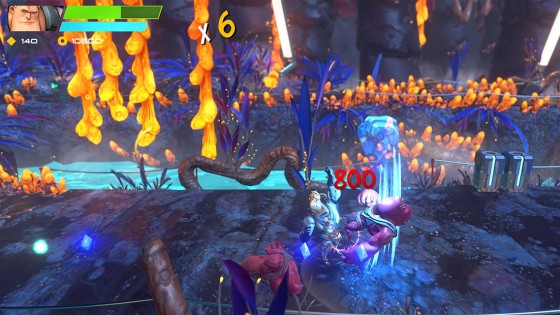 Another level forces you to battle on raised platforms. If youâ€™re knocked off the side, then it’s back to the checkpoint. Again, this proved to be more frustrating than challenging as checkpoints are often five minutes apart. Then in the second world (an alien planet – the fact that there are only two worlds is another odd design choice, incidentally) youâ€™re confronted by five of the toughest of enemies all at once while navigating a narrow corridor. Itâ€™s almost impossible to dodge their attacks as theyâ€™re so close to one another. We spent almost an hour trying to get past this stage before giving up and replaying past levels to try and boost experience. Bear in mind here that ZHEROS is far from being a pleasurable experience, with the final few levels in particular bordering on chore-like. It doesnâ€™t present you with challenges; it presents tests of patience. Thereâ€™s no other way to describe it.

When the final blow was delivered to Dr. Vendetta we breathed a sigh of relief, happily knowing that we didnâ€™t have to waste any more of our precious time on this blatantly unfinished mess.