Even indie titles feature at least one unique selling point these days; a certain something that makes them standout from the crowd, or (allegedly) gives them the edge over similar titles. Hardware: Rivalsâ€™ biggest failing is its archaic design, failing to provide anything that hasnâ€™t been seen or done before. Itâ€™s most ironic considering the original Hardware – 2002â€™s Hardware: Online Arena for PlayStation 2 – was perceived as being ahead of its time.

The only thing stopping Hardware: Rivals from being an entirely drab experience is the exceedingly colourful palette. Presumably Sony wanted this online vehicular shooter – of the tanks and jeeps variety – to appeal to gamers of all ages, like fellow PS Plus freebie Rocket League before it. It certainly doesnâ€™t take itself seriously, featuring a line-up of drivers that let out such tired wisecracks as â€œI hope youâ€™ve got insuranceâ€ and â€œDonâ€™t quit your day job!â€ Itâ€™s like the audio designers werenâ€™t even trying. 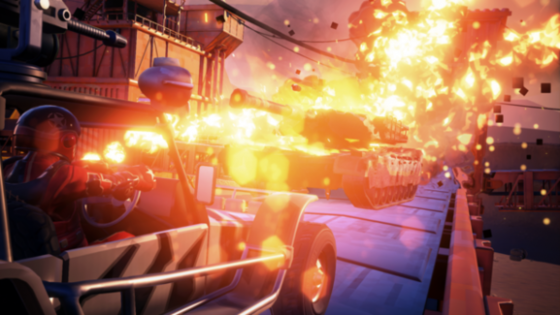 While lacking identity in terms of character design, Hardware: Rivals does have a couple of mentionable ideas. The most predominate is that each map has its own â€˜super weaponâ€™ power-up – a deep freeze can be triggered on the arctic base arena, slowly stopping all vehicles in their tracks, while a health-sapping corrosive storm can be summoned when battling inside a quarry. In most instances the only means of escape is to get to higher ground. Although this feature does keep players on their toes, respawning just before (or during) super weapon activation leads to some frustratingly swift deaths.

Hardware: Rivalsâ€™ other mentionable feature is implemented slightly more successfully. To wit: challenges that can be completed on the fly. During battles high scores are kept for certain jumps and runs, adding an underhand competitive element which encourages players to zip around rather than remain stationary. The Aztec ruin map, for instance, has a large pyramid in the middle which just begs to be driven up and over at high speeds. Those who prove to be the best at doing so earn a place on the online leaderboards. Itâ€™s one of the few redeeming features. 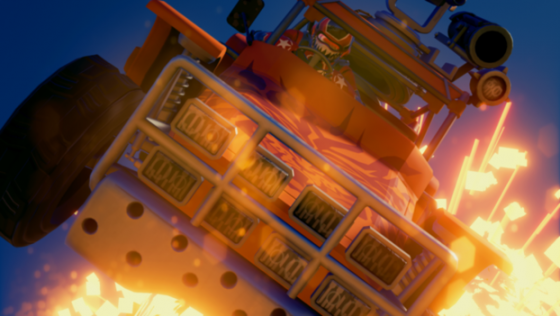 It also discourages camping, which is something that soon emerges to be an issue. An undeniable focus on power-ups has seemingly prompted players to wait near item respawn points, super weapons included. Primary weapons are only intended to either finish off or soften the opposition, and so itâ€™s pretty much essential to pick up one of the more frequently found power-ups (plasma rounds, bombs, missiles, EMPs, etc) before engaging the enemy.

never hits the sweet spot despite the candy coloured exterior

Itâ€™s fair to say that homing missiles are the weapon of choice for many as we felt their sting many times, usually fired from players who have made themselves cosy on a higher up vantage point. Firing a shot in retaliation is almost impossible due the fact that tanks canâ€™t raise their cannons upwards.

The lack of collision damage strikes us as a missed opportunity too, although itâ€™s understandable it was omitted due to balancing reasons. When two vehicles collide they often end up on either their side or roof, instantly turning them into sitting ducks. A very messy shoot-out often ensues.

In terms of balancing elsewhere, tanks are slow but built like, well, tanks. Jeeps on the other hand are nippy but weak, equipped with a rapidly firing mini-gun. In some match types you’re free to choose your vehicle while in others you’re auto-assigned, usually during battles that pit tanks against jeeps. Don’t expect to partake in large-scale assaults – 5v5 battles are as hectic as it gets. 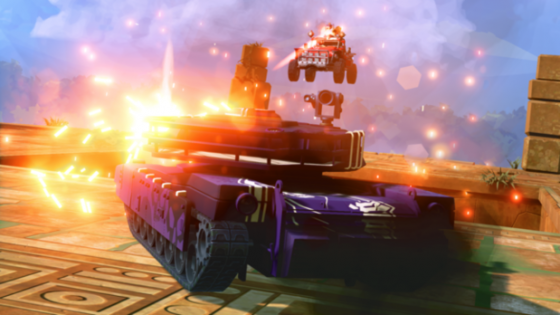 Restrictive aiming is another problem, and one thatâ€™s hard to ignore. Youâ€™re required to hold the joypad in a most irregular manner, accelerating, shooting and aiming entirely using the right side of the joypad. As such, the whole experience lacks the fluidity and responsiveness of Call of Duty and other online shooters that demand fast reflexes to stay alive. Auto-aiming upgrades – awarded via levelling up – help matters, but not majorly so.

The fact that originality isn’t Hardware: Rivals strong point hits home pretty early on, leaving us to contemplate just what Sony set out to achieve here. We can only assume that it was always planned to be a PS Plus freebie – a small, low budget download that provides some light-hearted shooting action. Or to iterate: something to occasionally dip in and out of for an hour or so. While there’s certainly room in the PS4â€™s library for such a game, Hardware: Rivals never hits the sweet spot despite the candy coloured exterior.