When playing a game you usually feel something. With intention of penning a review Iâ€™ve been slogging away at the free-to-play Battle Islands since it stealth launched on Xbox One last Friday, and so far Iâ€™ve felt this: nothing. Well, a little more than nothing – emptiness and dismay. The last time I played something just as soulless was back in the days of those notoriously bad Â£9.99 PlayStation 2 games. Midas Interactive or Phoenix Games – take your pick.

Put simply, I cannot squeeze a single ounce of pleasure out of it. Itâ€™s a mobile conversion that made its console debut on PS4 some time ago, and has now found its way to Xbox One. It has allegedly seen a visual overhaul to bring it up to console standards but youâ€™d be pushed hard to tell, hence allegedly. Even the loading screens are ugly and the music is so irritating, playing on a short loop, that it was soon muted. 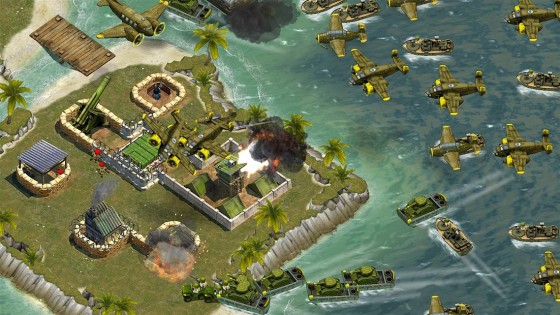 The concept alone is sound enough though, or at least it is for on-the-go gaming. Every player has their own island which is slowly fortified over time by strategically placing turrets, howitzer cannons and both air and sea defences. All the while factories churn out resources, which are used to train troops, construct new buildings and upgrade existing ones.

nothing more than a vicious circle

Itâ€™s one of those games that are bafflingly popular on mobiles; the kind where a five hour wait to construct a new building isnâ€™t uncommon. You also have to load it up every hour or so to collect (and spend) resources as they can only be stockpiled so high. Presumably, then, this is intended for gamers who never stray too far from their Xbox. After bumbling through the tutorial youâ€™ll soon start burning through the â€˜freeâ€™ resources provided in order to construct the fundamentals. Although Battle Islands doesnâ€™t nag or shove IAPs in your face the option is spend real cash is still pretty blatant, with prices as high as Â£64.99 for â€œa shipload of goldâ€.

Once your island starts to take shape itâ€™s then possible to launch attacks on other players. Youâ€™re provided with a short list of potential targets, ranked by how many dog tags theyâ€™ve managed to acquire – 1000 is the base rate. Now this is where Battle Islands pretty much falls to pieces. Aside being able to choose where your platoon lands you have no control over them whatsoever. Entire squads will stand on the spot merrily shooting a building while taking fire from a nearby turret. There are no tactics to learn and exploit – it’s a simple case of throwing everything at the enemy and hoping for the best.

Once an attack has been launched you then â€˜revealâ€™ yourself to other players, allowing them to launch assaults on your own turf. Or you can cough up 50 gold pieces to remain camouflaged. Worryingly, youâ€™re openly encouraged to prey on new, inexperienced, players who have yet to establish their defences fully. 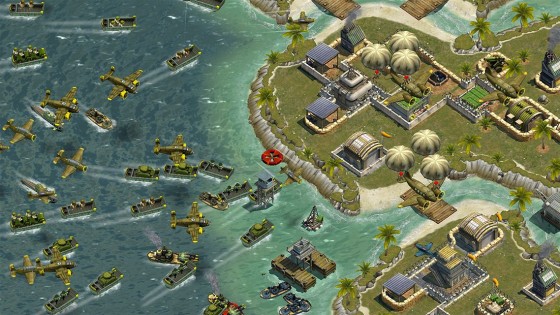 Initially I thought the chance to watch a replay of your island being torn to shreds by other players was neat – if humiliating – but soon realised that itâ€™s just another means of getting players to spend more cash. The only real purpose replays serve is to highlight gaps in your defences, prompting you to then consume resources to fortify weaker areas. And this is what the whole shebang boils down to – spending money, virtual or otherwise. It doesnâ€™t take long at all to realise that Battle Islands is nothing more than a vicious circle that the developers hope you’ll get sucked into. Whether youâ€™re constructing buildings, training troops, launching an assault, repairing damage or trying to protect your island from future attacks virtual currency is consumed.

On top of all this – and this is presumably why Battle Islands did quite well on mobiles – thereâ€™s a rather detestable whiff of â€˜Keeping up with the Jonesesâ€™ about it, in the sense that you have to constantly improve your island or be left looking like an easy target.

It pains me to say it, but Iâ€™m starting to miss the days when Microsoft was strict about what can and canâ€™t be launched digitally on the Xbox. Opening the doors to all and sundry seems to have resulted in the Xbox One store being a dumping ground for digital crap. We donâ€™t have to look far at all for further proof of this – this Friday saw the launch of the former Wii U eShop exclusive Rock ‘N Racing Off Road DX, a game with a paltry 39% Metacritic.