If this JRPG was set in modern day England it would tell the story of a mild mannered 20-something left in charge of a quaint countryside B&B. The kind that costs Â£125 a night and all breakfast produce is organic. Or allegedly so. Business isnâ€™t exactly booming, and so the new owner has to make ends meet by finding and selling crystals sourced from a nearby cave. A sudden heavy earthquake opens up an undiscovered part of said cave, and, well, thatâ€™s this intro ruined – UK earthquakes rarely cause more than a fiverâ€™s worth of damage. 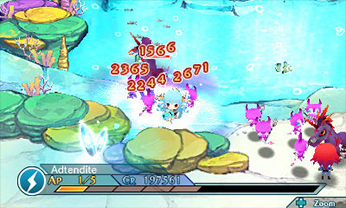 Praise be for the world of fantasy. The owner of the B&B – actually an inn that can be named as you see fit – is called Luchs, and the earthquake managed to shatter a large crystal containing a mysterious girl with magical powers. It soon transpires that she isnâ€™t alone – two other girls were also freed from their crystal chambers. The trio recall being close friends, but fail to remember how and why they came to be imprisoned.

So what does Luchs and Bart, his part-time helper, do? They take the girls back to the inn and dress them in a tight fitting maid outfits. Suffice to say, there’s a slight perverse streak present in Lord of Magna. We canâ€™t ignore the ability to take a bath with the girls – bath salts in the inventory permitting – and the gratuitous cleavage shot during the animated intro either. Youâ€™ll (hopefully) be glad to hear that it never descends down the controversial path Senran Kagura took – itâ€™s more suggestive than smutty, and to be honest itâ€™s hard to dislike a game with such an outlandish premise.

For the record though, the Japanese version is apparently a little saucier. The bathing cut-scenes end abruptly, so weâ€™d wager that Japanese gamers are treated to something steamier here, if youâ€™ll excuse the poor pun. 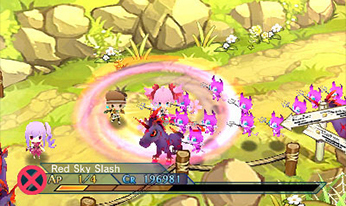 Being a mere inn keeper, Luchs isnâ€™t much of a fighter and as such has to rely on good old girl power when fighting the fiends also woken during the quake. The girls each have their own special moves and weapons – including a large gun with an assortment of bullet types – and also attack radiuses of different sizes. Sadly, this fails to add a tactical slant to the proceeding – we never felt the need to cycle through the party to find the right girl for the job.

Luchs can damage just one enemy per turn due to his miniscule striking distance while the girls can harm several at once. The curiously colourful enemies – which include demonic teddy bears – appear in high numbers and when hit they literally topple like bowling pins. Even the developers themselves compare to the battle system to bowling. The more knocked back at once, the higher the combo chain. Strike more than ten and your chosen fighter gets an extra turn, akin to picking up a spare. Itâ€™s an inventive way of doing things, but the delight of damaging numerous enemies at once comes at the cost of precision – far too much time is wasted fine-tuning attacks just to get that extra enemy into the attack radius. Itâ€™s possible to accidentally block a path after knocking enemies for six too – thereâ€™s no control over where they land. In the time it takes to free your path, a new wave of enemies can potentially be spawned as most maps feature respawn generators. This can make some battles feel drawn out, especially when said generators take a ridiculous amount of hits to destroy.

Cut-scenes also suffer from being overly lengthy, but at least the translation/localisation is top notch and thereâ€™s a fair bit of vocal work. It also helps that Bartâ€™s role is to provide comical value, at one point confessing that he stitches the maidâ€™s outfits by hand. Even so, this is something of a slow burner that doesnâ€™t really get going until around 5 hours in. By this point the five-strong party is fully formed, the main villain introduced and the world map unlocked. 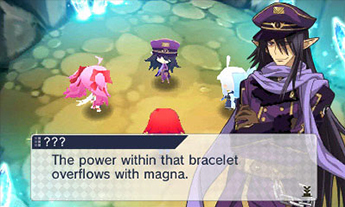 The ability to swap vegetables via StreetPass (one maid enjoys cooking) also becomes available, as does the chance to craft items. These two elements arenâ€™t particularly well explained though. In fact, itâ€™s very easy to completely overlook the crafting aspect – youâ€™re simply informed mid-conversation that one of the girls has set up a machine in the workshop. Itâ€™s also here that items are bought and sold. Thankfully you donâ€™t have to worry about keeping a steady stock of health potions as these are frequently found during battle. Theyâ€™re potent too.

You can, however, guarantee that when you do need to visit the store the opportunity wonâ€™t arise. Lord of Magnaâ€™s pacing really is all over the place, with battles varying from short ten minute skirmishes to lasting over an hour when boss creatures and generators are involved. There were times when we worried that the 3DSâ€™s battery was going to die before reaching the next save point, such is the infrequency. Couple this with the lengthy, text heavy, cut-scenes and youâ€™re left with something that doesnâ€™t grab attention like a RPG should.