As we discovered firsthand back in 2013, SteamWorld Dig is a very hard game to fault without sounding petty. This somewhat belated Xbox One version – which appears to be the last iteration out the door, leaving Image & Form to give SteamWorld Heist their full attention – follows suit, with the past two years being remarkably kind. Even more so when you consider the gameâ€™s humble roots – a 3DS eShop release that seemingly came out of nowhere.

If you missed SteamWorld Dig when it launched on other formats, then brace yourself for a bite-sized nugget of brilliance. It tells the tale of a robotic cowpoke who arrives in a ramshackle mining town to pay tribute to his late uncle. It soon transpires that protagonist Rusty was intended for a greater purpose in life, with his uncle leaving a cookie crumb trail of gadgets and gizmos that eventually take Rusty into mysterious depths deep underground. Elements are borrowed from other games that focus on frolicking in the dirt – from Namco’s arcade classics Dig Dug and Mr. Driller to the more recent Spelunky – but never in a manner that could be seen as plagiaristic. 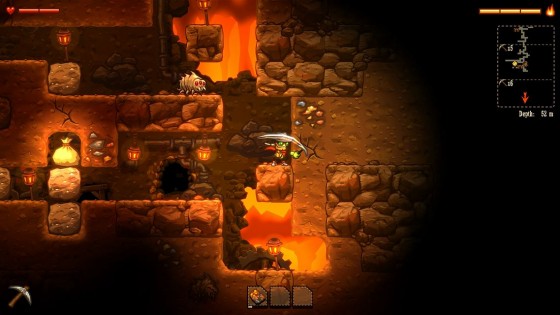 Metroid is another obvious influence. Rustyâ€™s upgrades arenâ€™t just beneficial for combat; they give access to new areas too. When nearing the location of an upgrade its whereabouts is automatically added to the highly helpful mini-map, and so itâ€™s always clear where to head next. If ever in doubt, simply keep digging downwards – eventually youâ€™ll come across something, be it a cave thatâ€™ll put Rustyâ€™s latest upgrades through their paces or an alcove swarming with enemies and dirt-encrusted riches.

Any valuables collected can be exchanged for cash when back on the surface, which in turns boosts Rustyâ€™s XP level and unlocks new parts to kit out the likeable lead with. This provides a brilliant sense of progression and ongoing character development. Rusty starts with a blunt pickaxe and a hand-me-down lamp, but is soon bestowed a hydro powered drill that significantly speeds up the descent down the mine. The shallows of water required to power the drill are on the scarce side – which is one of our few complains – but providing teleports are placed proficiently it doesnâ€™t become a major hindrance. Warp pipes found on the surface also help reduce the amount of backtracking. 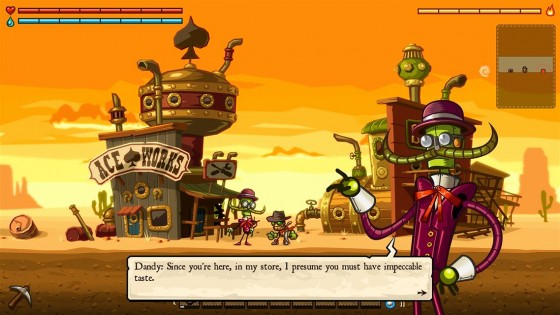 Another minor complaint is that combat is slightly lacking, especially by console standards. Then again, this isnâ€™t a combat focused experience – itâ€™s about exploration and self-discovery, and itâ€™s these two elements that SteamWorld Dig excels at. Ignoring the fact that the lamp does need recharging every so often, thereâ€™s no nagging time limit and punishments for death are minimal. Upon popping his clogs (or cogs, as is the case) Rusty leaves behind a bag containing whatever was being carried at the time. The chance to recover lost loot gives incentive to dust yourself off and try again. Donâ€™t worry – we arenâ€™t about to make a lazy comparison with Dark Souls.

At around 3-4 hours, SteamWorld Dig is far from being longest experience around. Again, it’s hard to see this as a major issue – the price (Â£7.99) reflects the length and itâ€™s highly doubtful that all upgrades and secrets will be discovered during the initial playthrough. Indeed, this has been designed with speed-runs and multiple revisits in mind – the completion time is shown at the end of the game and your overall performance rated in stars. Aim to see everything and unlock all achievements – most of which are based around beating the game while meeting certain criteria – and the ten hour barrier can easily be broken.

Consider it fortunate, then, that becoming infatuated with SteamWorld Dig is pretty much inevitable. It’s an undeniable labour of love.