With Activison’s involvement of the Spider-Man license now limited to the increasingly poor movies, the rights to create games based on the Spidey comic books have found a new home at renowned mobile developer Gameloft. Fans should rejoice – a change of hands has done wonders for the iconic character. It’s exactly what the license needed, and something that has been a long time coming. So long, in fact, that we can’t even remember who owned the Spider-Man license before Activision. 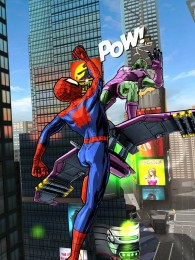 Foremost, those expecting something similar to Activision’s open-world adventures should curb their enthusiasm. This is an objective-based auto-runner with very simplistic controls. That’s the reason why it works so well though – they’re incredibly intuitive, with just simple swipes of the screen required to manoeuvre the Spidey with both speed and grace. Enemies with shields are defeated by swiping down, prompting Spidey to slide into their nether regions, while airborne foes are attacked by swiping up. Web-swinging meanwhile is handled by pressing the screen for a couple of seconds between swings. The only thing that doesn’t work all that well is wall climbing, which relies on finicky tilt controls. Thankfully, wall climbing sections aren’t too common.

The plot sees Spider-Man out to stop the Sinister Six from fully opening an Avengers-style intergalactic portal currently looming above the city. Fortunately Spidey isn’t alone in this quest, able to recruit fellow Spider-Men from other spider-verse dimensions. These are summoned at random (and vary in rarity) by using canisters collecting during the dazzlingly colourful levels. Nick Fury lends a hand as well, showing up during the brief but stylish cutscenes to explain mission objectives and detail what the enemy is up to next. Furyâ€™s dry wit combined with Spider-Man’s snappy one liners make for much amusement. Black Cat and others provide additional side-missions, such as breaking into Oscorp to steal medical supplies for the wounded. 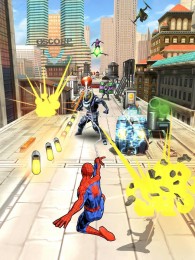 As superficial as it sounds, the game’s polished presentation and authentic comic book looks provide the initial draw. It clearly has had a lot of time and attention lavished on it, to the point where it’s evident that Gameloft has a lot of love for the red-clad hero. His instantly likeable personality shines in a manner that was often sorely absent in his previous high-profile releases.

To begin with extra lives and continues flow freely, allowing plenty of chances to tackle the opening missions without being pestered to cough up cash. When these have been used up however, the game’s paywall starts to show. Spider Tokens are required to attempt each stage and are usually replenished five at a time after a ten minute or so wait. Alternatively, you can pester friends for more. Continues meanwhile require ISO-8 – the chemical compound that the Sinister Six are after. This does often put you in the irritating predicament where you can retry levels from scratch, but canâ€™t instantly continue when dying. The problem here is that each retry forces a return back to the main menu. Completing a mission without continues is highly satisfying however, even if chances are most missions will need a few attempts before perfecting a one-life run. 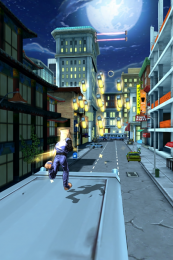 ISO-8 can also be used to acquire rare heroes from the spider-verse, some of which can jump higher than regular Spidey. One nice touch is the ability to send spare heroes out on behind-the-scenes quests. The more you send, the higher chances of success.

A skilfully implemented XP system holds the package together – some missions require certain levels of experience before they can be tackled. It’s possible to get around this by absorbing the XP from other Spider-Men in your collection, albeit at the cost of losing that character for good. If that sounds like a sacrifice too large then worry not – there’s an unlimited endless runner mode where the further you make it, the more XP is earned.

Spider-Man: Unlimited has taken us by surprise – itâ€™s effortlessly playable and impeccably designed. Sure, originality isnâ€™t high on the agenda – it is yet another endless/auto-runner after all – but we can take solace in the fact the Spider-Man license has ended up at a studio that clearly has a lot of passion for the character theyâ€™ve been asked to work with.