A bit of a random one, this. A trip to Wilkinsons today revealed that the UK chain is stocking a range of officially licensed Space Invaders stationary. 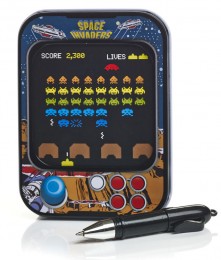 Although there has been near countless Space Invaders merchandise over the years – found even in the likes of Tesco – Wilkoâ€™s prices turned our collective heads.

We treated ourselves to a pack of two pens featuring the iconic aliens, costing a mere Â£1.75.

Also available: a Space Invaders memo paper and pen set, contained in a metal tin featuring arcade cabinet artwork. If you like the look of it, itâ€™s available via their website for Â£2.75.

Rulers, ring blinders, notebooks and a few other bits are available at around the same price. We are however unable to confirm if the ruler makes an amusing noise when struck from the end of a desk.

The range has undoubtedly been released in time for the kidâ€™s fast approaching return to school. Why should they get all the cool stuff though? Why indeed.