If you decided to give the Warface beta a miss then you made a wise choice. The servers were about as stable as a three-legged table, and even when they were up and running there were countless irritations to contend with.

One particularly annoying quirk was that when attempting to host a match you’d often end up being thrown out of your own lobby on the grounds of being “inactive”. We understand that beta games are in an unfinished state, but where the logic in this lied we simply do not know. On top of all this, there are reports that some players who spent money on in-app purchases in the beta are yet to have their purchases carried over to the full release.

Since Warface exited the beta stage earlier this month the servers have become more stable, but they still fall well short from offering the kind of reliable service that weâ€™re now accustomed to. Experienced players can freely enter rookie lobbies, and you also have to put up with being forced to join matches that have literally just a few seconds left on the clock. The matchmaking service also has the annoying habit of connecting to custom games without telling you. The problem here isnâ€™t necessarily the fact that custom games may have unfamiliar settings but rather that hosts – either accidentally or otherwise – often choose just one map to be played over and over again.

No matter if youâ€™re taking part in a free-for-all or a team deathmatch the maps are stupidly small, especially given the relatively impressive 16-player limit. They remind us of the type of multi-player maps from the early days of online shooters, where symmetry played a huge part in their design.

In some instances itâ€™s hard to even tell that Crytek has worked on big-name first-person shooters before. A fine example is the amateurish design of the farm map – itâ€™s possible to step just a few yards out of your base and land a grenade in the vicinity of the enemy teamâ€™s respawn area. Then thereâ€™s the map set in a dreary warehouse full of cargo containers. Itâ€™s nigh impossible to go more than ten yards before running into an enemy, and as such the match criteria of 100 kills can be met in mere minutes.

Make no mistake; this is a game of cheap kills and harsh bullyboy tactics. During team deathmatches the only respawn area is inside your team’s base. Because of this, battles usually focus solely on assaulting the opposition’s respawn area in strength and number. Observing enemy players merrily planting claymores on your own turf while lobbing grenades and shooting rivals in the head as soon as they respawn is a ridiculously common sight. It also doesnâ€™t help matters that powerful kickback grenades are among the cheapest of consumables, which leads to a lot of deaths caused by seemingly blind grenade throwing elsewhere on the battlefield. 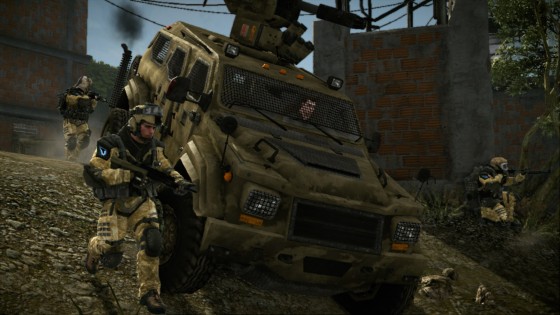 The five player co-op mode is Warfaceâ€™s saving grace. These short missions against onslaughts of AI controlled enemies alternate on a daily basis. They also vary significantly in difficulty – the tougher challenges can take several attempts to beat, although the presence of resurrection tokens (an IAP, of course) does make them slightly easier. At the end of each day the team with the highest score gets their name on the leaderboard and an exclusive badge for their custom tag, which is a nice little touch.

a game of cheap kills and harsh bullyboy tactics

As you’d expect, the focus is on teamwork. Each of the four character classes have their own unique dispensable item, including ammo crates and additional armour. Players can also help one another access higher areas – a technique that bestows a small amount of XP. Itâ€™s also a very good idea to have at least one medic on the team, especially during the tougher challenges.

Medics arenâ€™t available from the start, nor are engineers. Thankfully neither takes long to unlock. When unlocking additional character classes youâ€™re provided with a temporary rental of some of the better weapons available. When that rental period is up however, youâ€™re forced to either go back to the bog-standard rifles each character starts out with or open your virtual wallet to buy better ones.

Crytek has seen fit to include three in-game currencies – Crowns, Dollars and Kredits. Crowns are elusive, earned by completing co-op missions or beating contract challenges. Theyâ€™re used to purchase flashy weapons with outlandish paint jobs, purposely designed to stand out from the rest of the arsenal. Gained from deathmatches, dollars flow more freely. The better you perform in battle, the more money you receive. Gloves, helmets and grenades arenâ€™t too expensive but guns cost a small fortune. Whatâ€™s more is that all purchasable items deteriorate over time; yet another money sink. Kredits, finally, are the purchasable currency with the cheapest IAP, currently priced at Â£3.99.

The store doubles up as the load-out screen, so thereâ€™s no escaping prompts to buy better items. At the end of each match youâ€™re also brazenly shown how much XP and money you could have gained had you purchased a booster pack beforehand. Out of all the F2P releases on Xbox 360 this one shoves optional purchases in your face the most.

Thatâ€™s not the gameâ€™s biggest problem, and nor is it the poor, hackneyed map design or abundance of bizarre design choices. Itâ€™s the fact that it it brings nothing new to an already tired genre. The undeniable focus on IAP also makes it impossible to treat it as a competition-level shooter like eSports-favourites Call of Duty or Counter Strike – if you don’t cough up some cash, then you’re at a serious disadvantage. Even those that are willing to spend a little money on it would be better off buying a pre-owned copy of Battlefield 3 or Call of Duty: Black Ops. These games may be knocking on a bit, but theyâ€™re far more enjoyable experiences.

In Warface thereâ€™s always somebody on the battlefield with weapons and armour far superior to what’s currently in your arsenal. If that doesnâ€™t put you off playing, then the fact that almost every death is as cheap as the last surely will. We honestly thought the days of respawning next to the enemy that just killed us were a thing of the past.