Those who believe Call of Duty is Activisonâ€™s most overworked franchise obviously arenâ€™t aware of how often the publisher releases new Cabela hunting simulations. There are seventeen on Xbox 360 alone, three of which – we kid you not – were once released on the same day. That said, chances are the majority of gamers are blissfully unaware of series. Although the Cabela games have a sizeable cult following in the US, itâ€™s fair to say that outside of Activisionâ€™s home turf people only buy them for one of two reasons – either out of sheer curiosity, or to unlock the easy achievements they usually contain.

Just like Call of Duty, Activision alternates the series between two developers. In this case, Cauldron and Fun Labs. The former are behind this offering, and a quick glance on Google suggests that Cauldronâ€™s games are the better out of duo. Indeed, this feels like itâ€™s intended to be a franchise reboot of sorts. Previous Cabela games (or at least, the two or three weâ€™ve played in the past) have had a rather amateurish look and feel to them, but here itâ€™s clear that effort has been made to make it a much more comprehensive and engrossing experience. Maps are far larger and consequently time limits are longer. We were actually quite surprised to discover that some hunts can take almost an hour to complete.

Your hunt career begins with just a reasonable rifle and nothing more. Bows, shotguns, special ammo and hunting calls come at an additional cost and are often required to take part in certain hunts. If you want to carry enough firepower to effortlessly take down a grizzly bear, youâ€™re going to have to take your time and make every shot count.

Thatâ€™s no exaggeration. Miss a shot and the piercing noise of the rife alone will send herds running scared, leaving you with the choice of either following their tracks or going to a different area. Every shot fired triggers a slow-mo x-ray feature and emphasis is on quick and clean kills – shots to the lungs, heart and spine. If you thought Sniper Elite V2â€™s kills were grizzly, think again. Animals merely wounded will scurry into the undergrowth where they then have to be tracked down and finished off. Although itâ€™s the humane thing to do, itâ€™s also a vastly time consuming task. So much so that we often found ourselves simply re-starting hunts and trying again. 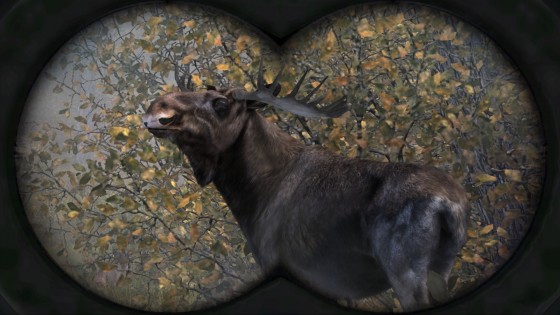 Animal behaviour is surprisingly realistic. Deer will stop and stare if they sense your presence, stamping their feet on the ground to alert other animals around them. Warthogs on the other hand will charge if startled, quickly putting an end to your hunt. As well as sound and motion they can detect scents too, and so a careful eye has to be kept on wind direction. This makes approaching herds a task that requires patience. Go running through bushes and rivers, firing shots off willy-nilly, and youâ€™ll be lucky to take even a hare home. Pro Hunts, introduced by renown hunters, are even more demanding. These short bonus missions see you taking down nefarious beasts, including a rowdy warthog known as Hogzilla and deer lovingly referred to as Pincusion. Poor old Hogzilla. All he ever wanted was to be left alone.

We arenâ€™t afraid to say that there were times this game did make us feel slightly uncomfortable. Perhaps even more so than any other game before it. Ribs crack, lungs perforate and thereâ€™s something demoralising about tracking down puddles of blood left behind from prey, only to eventually find them lying dead under a bush or face down in the middle of the river. Hunting – at least as its represented here – isnâ€™t an entirely barbaric pursuit however as guidelines must be adhered to. Merely wounding animals is frowned upon and can often result in points being deducted, while taking advantage of bedding (read: sleeping) animals also results in a firm telling off. Certain weapons canâ€™t be used to hunt certain animals either, such as using shotgun slug rounds on birds.

It probably goes without saying that to due subject matter alone, some people arenâ€™t going to want this game anywhere near their console. Although that may be, itâ€™s still a sturdy package and one thatâ€™s suitably different enough to recommend to those looking for a new experience. Itâ€™ll have you crawling through mud while following animal tracks like a caveman, before spending what seems like an eternity to find a clear shot. No other game makes you work harder for a reward and you have to respect it for that, if nothing else.