Usually Nintendo spaces their sequels years apart, but thatâ€™s not the case for NES Remix 2. The Â£8.99 download is due to arrive on the Wii U eShop this week, almost five month exactly after the original launched.

With a stronger line-up of NES classics broken into bite-sized bits – including Super Mario Bros. 3, Kirbyâ€™s Adventure, Metroid and Kid Icarus – reviewers claim that itâ€™s a improvement over the first NES Remix.

â€œNES Remix 2 feels like a step forward on most fronts, which almost seems more like a long jump considering where the series startedâ€ said Joystiq, who gave it a respectable enough 3.5/5.

Destructoid meanwhile felt that â€œNES Remix 2 is a solid follow-up with more “must have” games and a few extras to sweeten the deal. If you passed due to the ho-hum nature of some of the titles in the original offering, think about checking it out this time aroundâ€. They went on to give it an 8, whereas the original was given 7.5.

Japanese gamers have been treated to a retail release of NES Remix 1 and 2, complete with some rather appealing box-art. As much as weâ€™d like to see it over here, thereâ€™s no word currently. With Wii U releases thin on the ground however there is a chance we could see it fill a void in the release schedule over the coming months.

The last of the announced Wii U GBA Virtual Console releases is also making an appearance this week – the evergreen egg-chucker Yoshi’s Island: Super Mario Advance 3 (Â£6.29). Hopefully Nintendo will now open the gates for third-party GBA games. Weâ€™re pretty sure SEGA would jump at the chance to re-release the Sonic Advance trilogy on Wii U.

Over on the 3DS eShop nautical platformer Sayonara UmiharaKawase leads the way. If the name rings a bell then you sir have fine taste – the SNES original was a popular choice with importers. Like the original, this 3DS revamp stars a female protagonist armed with just a fishing rod. Rather than for fishing, the rod is instead used as a grappling hook to navigate the sea-creature filled levels. Itâ€™ll set you back Â£19.99. If that price strikes you as steep, just bare in mind that it was a retail release in Japan. Why the US name – Yumi’s Odd Odyssey – hasnâ€™t been used in Europe is a mystery to us though. 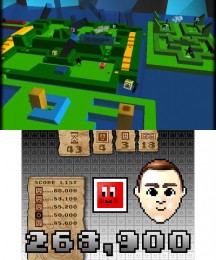 Then thereâ€™s the peculiar looking Bit Boy!! ARCADE (Â£7.19), which is a sequel to the similarly peculiar WiiWare title Bit Boy. Reviews started appearing late last week and have been mixed. Nintendo Life said that itâ€™s tough to recommend due to â€œconfusing design choices, recurring glitches, and boredom that sets in far too quicklyâ€.

Nintendo Enthusiast on the other hand were rather taken by it: “The game offers a beautiful visual style, tight gameplay, tons of levels and worlds to explore, and some great writingâ€.

This leaves us with DSiWare title Sea Battle (Â£1.79) which appears to be a clone of Battleship and nothing more. Itâ€™s by Teyon who seem to be knocking out new eShop titles on almost a weekly basis of late.

There are some weekly discounts on the eShop too, but theyâ€™re pretty much passable – 3D MahJongg, Funfair Party Games, Gardenscapes and Secret Agent Files: Miami are all getting a price drop this Thursday. 3D MahJongg is the cheapest of these, falling to Â£3.29 until 8th May.