The current issue of Uncooked Mediaâ€™s ONE Gamer magazine is to be the last. Fear not – the mag isnâ€™t about to join the likes of Xbox World, PSM and NGamer in heaven’s paper recycling bin. Itâ€™s instead being transformed into a multi-format magazine known simply as GAMER, with the first issue launching 21st May.

The final editorial in ONE Gamer claims that GAMER will be â€œa magazine for everybody who considers themselves a gamer, whether they play games on an Xbox, PlayStation, Wii, PC handheld, smartphone or tabletâ€. 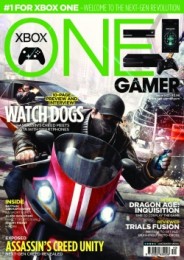 Joint editor James Artaius then goes to assure that Xbox coverage wonâ€™t be minimised in the slightest. Considering that their readership will mostly comprise of Xbox owners – especially to begin with – thatâ€™s a smart move. Reading between the lines though, it could simply be the case that GAMER is going to focus heavily on multi-format titles in order to cover the broadest spectrum possible.

GAMER will also be supported by GAMER Interactive, a free digital magazine released every other Wednesday for iPad, Android and Kindle.

As much as it pleases us to see a hear of a “new” magazine being launched, the decision to go from Xbox-only to multi-format does have a whiff of desperation about it, as if this is a last ditch attempt to boost flagging sales. We certainly fail to recall any other magazine going from single-format to multi-format before.

Still, we’d rather this happened than see the magazine disappear altogether. And although ONE Gamer (nÃ©e 360 Gamer) isnâ€™t the most prolific magazine around they do give a lot of niche titles significant coverage. A good example of this is the current issue, which unexpectedly features city-building sim Tropico 5 on the reverse cover.