While itâ€™s true that visuals arenâ€™t everything, Swap Force has an incredibly luxurious look and feel to it that enforces the fact Activision arenâ€™t just relying on heavy promotion to sell the series.

Dare we say that some may be surprised to learn that there’s a genuinely excellent game under the occasionally nauseatingly colourful exterior. Ourselves included, there – this is far from being the slapdash sequel that we were expecting.

Although it was only a year ago that Skylanders: Giants was released, Swap Forceâ€™s development began over at Vicarious Visions shortly after the original Skylanders proved itself to be a huge hit, thus allowing original franchise creators â€˜Toys For Bobâ€™ to focus on Giants and presumably next yearâ€™s edition.

A change in developer, not to mention a two year development period, has resulted in Swap Force feeling remarkably polished. It makes us wonder what other franchises could benefit from a change of perspective. 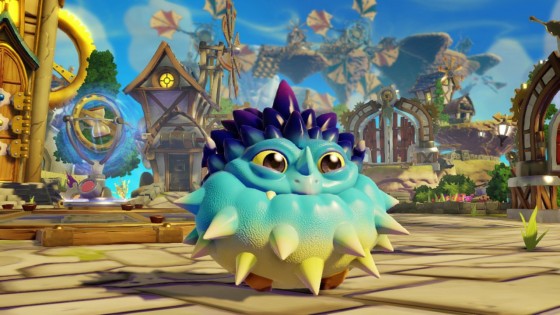 Speaking of perspective, the camera angle is now less claustrophobic and changes on the fly to give the best possible view of action. This goes a long way to giving Swap Force the look and feel of a traditional platformer rather than that of a top-down RPG like before.

Characters with swappable body parts are, of course, the big new addition with their tops and bottom switchable and independently upgradable. As well as having elemental powers, each member of Swap Force team has a unique skill that allows them to partake in the mini-games that punctuate the far longer levels.

Two Swap Force characters are included with the game itself, in addition to Ninja Stealth Elf – a variant of an original Skylander character. Older characters arenâ€™t bestowed any new abilities, but they can now jump freely instead of having to rely on springs and such to be elevated to new heights.

The giant Skylanders have sadly been pushed to the wayside to make way for the Swap Force, with their only role being to smash open large metal safes. Perhaps we should just be grateful that every single Skylander is compatible. Considering that the catalogue stands at 60+ figures, thatâ€™s quite the accomplishment.

The hub for the first Skylanders game was set on a small but perfectly formed isle. The sequel then made the rather odd decision of making the hub smaller, by setting it on a tiny aircraft. Pleasingly, Swap Force goes back to the originalâ€™s roots with a hub set in a large wooded grove. New areas open up as the Skylanderâ€™s quest to save four legendary elders unfolds, including an underground area designed especially for a fishing mini-game. Other distractions include challenge and survival arenas, with the latter now available for two-players. Thereâ€™s also a noticeboard thatâ€™s updated daily. Would you believe Activision holds double XP days? Well, itâ€™s true.

As per usual, the figures act as lives. When one Skylander dies they have to be taken off the portal to rest. The first half of the adventure shouldnâ€™t tax even younger gamers, but during the second half the difficultly level ramps up a notch. Characters do seem to level up quicker than before though, so hopefully by this point theyâ€™ll have improved attacks and amour to deal with the threat of Kaosâ€™ army of trolls, golems and whatever else the pint-sized menace can muster to join his cause.

A long list of improvements, coupled with a cast of likeable characters, prevents Swap Force from suffering from so-called â€˜franchise fatigueâ€™. Next yearâ€™s edition may not be quite so lucky – thereâ€™s a strong chance that the series may become bloated under the strain of original characters, giants, swappable characters and whatever gimmick is next on the agenda. Until then though, rest assured that Swap Force sees the series at a lofty high. It really is very lovingly made.