Earlier this year Capcom did something rather unexpected and brought the 3DS-exclusive Resident Evil: Revelations to consoles. By vastly improving the visuals and adding new modes Capcom just about managed to pull off this somewhat questionable stunt. 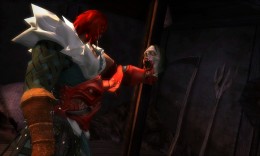 Konami have now followed suit by bringing the 3DSâ€™s Mirror of Fate to both PSN and XBLA. Out of all the thoroughly excellent 3DS games released this year this perhaps the only one to have not sold in significant numbers, so to see it being given a second chance is rather pleasing.

For some, the price-tag may also form part of the appeal. Itâ€™s a mere Â£9.99 to download, compared to the Â£20+ the 3DS original still sells for.

As you may expect, the visuals have received a spruce up. Character models retain a somewhat dated angular look, but textures have been sharpened and consequently now feature additional detail.

Itâ€™s still easy to tell though that this was never originally intended to be a console game – when the camera pans back things do look a little on the diminutive side. Sadly, this also has a knock-on effect to the atmosphere. The dark and eerie corners of Draculaâ€™s castle arenâ€™t quite as poignant to explore when displayed on a TV screen.

Worry not as thereâ€™s still a brilliantly designed game under the slightly unimpressive exterior. Part of this brilliance lies in the fact that all three playable characters – Simon, Trevor and Alcuard – have their own skill set. This not only helps to give each an identity, but it also makes their respective acts play differently from one another.

Their array of supernatural powers awarded as the story progresses is sizeable, varying from various spirits that can be summoned to the ability to change into a werewolf. 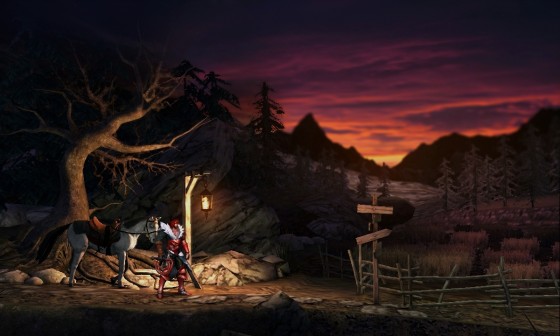 During each characterâ€™s three-hour-or-so act their paths cross on more than a few occasions, and usually under unforeseen circumstances. The castle itself is likewise cleverly designed. A duly-lit toy factory provides some slightly sinister imagery while an abandoned theatre sees the Belmonts fighting off possessed puppets. Just to further illustrate to variety of environments, deep down under the castle thereâ€™s a mine to explore which has lava flowing through it. 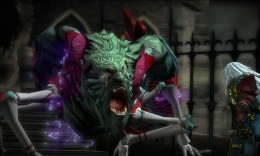 Trevorâ€™s opening act focuses on learning the ropes (whips?) before allowing him to show off his screen-spanning God of War-style chain attacks. The start of the game also features a couple of short boss battles that provide an ample taster of whatâ€™s to come.

Itâ€™s also during the opening sequence that the well-implemented map system is explained. It not only highlights where you should be heading to next – thus preventing aimless wandering – but it also displays where the numerous secret areas are. A lot of these areas can only be accessed once certain skills have been acquired. Thankfully itâ€™s possible to place markers on the map to remind you to come back later. 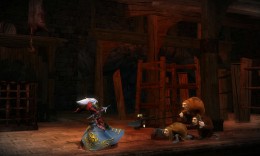 The act for fan-favourite Alcuard has a handful of puzzles to sink your teeth into – and hints are available should you get stuck, albeit at the cost of XP – while Simonâ€™s combat-heavy act seals the fate of the three heroes. By this point though we did start to tire of the combat. Although thereâ€™s a blocking/parrying system in place itâ€™s not particularly nuanced and the â€˜killerâ€™ finishing moves are vastly underwhelming.

Boss battles thankfully fare better. Theyâ€™re surprisingly frequent, and although they go down relatively easy – especially on â€˜easy modeâ€™ which has checkpoints mid boss battle – theyâ€™re still entertaining to slay with a few fast-paced QTE events helping to draw them to a grizzly conclusion.

On console â€˜Mirror of Fateâ€™ does feel a little out of sorts, lacking the scope and spectacle of other hack â€˜nâ€™ slashers available on the download services. Itâ€™s still a worthy addition to the long running Castlevania series though, filling the gap until next yearâ€™s Lords of Shadow 2 perfectly.