I thought it was some extreme creative license, but actually an LMP1 prototype sportscar at Laguna Seca isn’t as far-fetched as I initially assumed. Nonetheless, the Audi R18 is quite a fun car to have included in the Forza Motorsport 5 demo. Certainly it was too much for me to resist when I spent some time with the game at the Eurogamer Expo.

So, is the Xbox One ushering in a new generation of racing games? Well, not obviously, no. But there are some neat ideas, such as shoving your performance data to the cloud for processing, to endlessly tailor the AI in future races. It also features open-wheel single-seaters for the first time – IndyCar and classic F1. 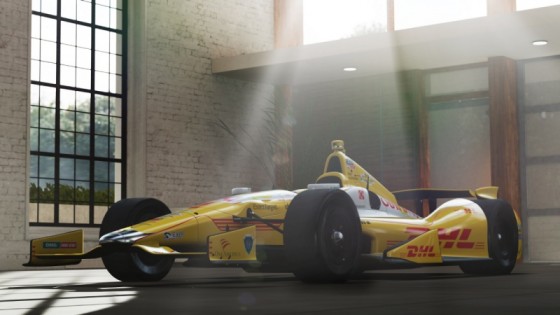 It certainly looks terribly pretty, with a low sun clearly chosen for the demo to showcase some particularly distracting lighting effects. By ‘distracting’, I mean ‘realistic’. And also ‘it nearly made me crash once’.

It’s worth being careful with that word ‘realistic’ though. You’re not going to be mistaking this for the real thing; it’s the same lack of incidental imperfections which give away a CGI render.

As if inviting the comparison, there was an actual McLaren P1 on the stand. That was covered in an unavoidable thin layer of dust, while the McLaren P1 in the game was either perfectly gleaming, or perfectly damaged. None of this is a criticism, but it’s worth setting expectations given that we’ve got new hardware here.

Whatever the fancy hardware and cloud-based shenanigans, the meat and potatoes is going to be driving cars around tracks – so how does it feel? A short time standing at a demo pod at a games show is never going to be the best place to judge, but so far so good.

One thing does feel different. The Xbox One pad has added individually vibrating triggers, which means you can feel the accelerator and brake pedal through your digits. The latter is particularly effective: leave it too late to hit the brakes and you’ll feel the squirming and wheel-locking through your left index finger. It’s a remarkably enjoyable sensation, especially noticeable when I was hooning around in the Ford Focus ST.

Of the cars on offer, the Focus ST was the most suited to the track. Throwing it around with a bit of BTCC attitude – rubbin’s racin’ – was most satisfying. There wasn’t really space to give the Audi R18 or McLaren P1 a proper run – clattering down the corkscrew in the R18 in particular felt rather clumsy – though suffice to say the added performance was obvious. 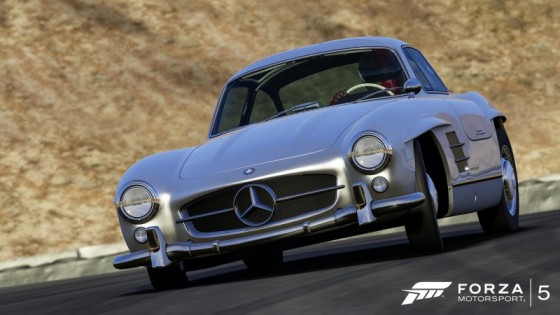 The old gull-wing Mercedes 300SL was a pleasant tootle around in comparison. It was also a reminder that steering wheels used to be massive. So much so that it was slightly in the way of the in-car view. Realism’s one thing, but couldn’t they have found a taller virtual gentleman driver?

A version of this post first featured on Jake’s motorsport blog, 2or4.co.uk