Our first taste of the PlayStation 4 was not with Killzone, Driveclub or even inFAMOUS, but rather Activisionâ€™s Skylanders Swap Force. This was mostly because the queues to play those games were approaching two hours at the time. Nevertheless, Skylanders did a cracking job at introducing us to the newfangled DualShock 4 controller. 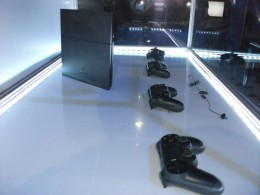 It wasnâ€™t until the joypad was in our hands that we began to fully appreciate just how much effort Sony has gone to. Thereâ€™s a weight to it that the original PlayStation 3 pad was missing, no thanks to Sony removing the vibration features, while the improved ergonomics of the ‘prongs’ add further comfort.

Both sets of triggers are pleasing to the touch, although L2 and R2 slightly more so than L1 and R1 which could perhaps have benefited from more depth. Thatâ€™s about our only real gripe. The light bar has been positioned perfectly in order not to distract, while the positioning of the touch pad isnâ€™t intrusive in the slightest. Listening to peopleâ€™s feedback at the show, the majority were impressed with the almost totally overhauled controller.

What of Skylanders Swap Force? Itâ€™s perhaps not the most cerebral thing to say, but itâ€™s looking like the best one yet. Activision have clearly upped their game this year due to the threat of Disney Infinity, although we dare say that the only threat there is Disneyâ€™s marketing rather than the game itself. The shift in camera perspective – from top-down to third-person – and the new found ability to jump (yes, Skylanders couldnâ€™t jump before) gives Swap Force a similar feel to the Ratchet & Clank games.

The PS4 provides a noteworthy visual sheen. Water effects and fauna and flora are more lavish than before; the characters appear more toy-like than ever while at the same time sporting additional frames of animation. The new door hacking mini-game looks set to tax young minds, requiring two lightning bolts to be navigated through a maze full of switches and blocks. One word of advice for fans: donâ€™t trade all the Giant figures as theyâ€™re still required to open certain doors. 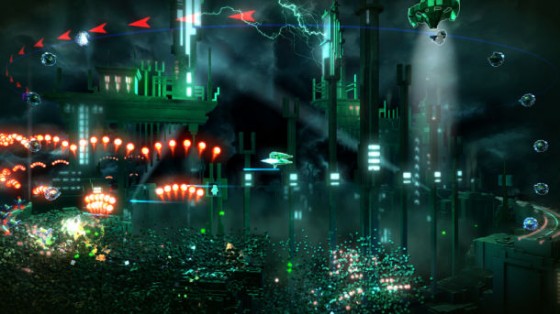 A somewhat smaller, but no less important, PlayStation 4 game to keep an eye on is Super Stardustâ€™s spiritual successor Resogun. The stunning shooter really highlights the Geometry Wars-shaped hole in the Xbox Oneâ€™s line-up. Heck, even the Wii U had a trippy shooter available at launch in the form of Nano Assault Neo.

Resogun isnâ€™t particularly trippy to be fair, but it does have a lovely assortment of explosions as well as alluring particle effects that occur when the environments are damaged. Your task is made clear from the start: â€œSave the last humansâ€ – and itâ€™s not long after those words vanish off the screen that wave after wave of enemies appear in the ring-shaped levels.

Presentation is slightly lacking at the moment, but this does at least suggest that developers Housemarque are focusing on getting the core game as close to perfection as they can rather than spending time on making the menus look fancy. Perhaps we should put some emphasis on the word â€˜suggestâ€™ there. Either way, itâ€™s looking very slick.

Rest assured that we did get to spend some time with Driveclub. Visually itâ€™s a step up from Gran Turismo 6 – which too was on show. Bear in mind here that the Gran Turismo games are often referred to as the pinnacle of realistic racing simulators, making that statement about Driveclubâ€™s visuals high praise. Not only do the vehicles boast more detail – particularly when damaged – but the trackside also, which features polygon-packed crowds to cheer you on.

The PS4â€™s camera is used to take a photo of your mug when playing online, with your face then shown on screen when beating other teamâ€™s drifting records and lap times. These impromptu challenges are frequent, appearing three or four times per track. The track design itself thankfully allows for some impressive displays of drifting with wide open bends. Crashes are overly brutal, which is partly due to how heavy the vehicles feel.

Resogun wasnâ€™t the only PS4 indie game on show – the delightfully quirky Octodad and Hohokum were there, as well as shooters Blacklight: Retribution, War Thunder and Warframe. Observing players attempting to get their head around Octodadâ€™s concept – a physics-based octopus simulator, we kid you not – and then chuckling to themselves even when failing, was something of a pleasure. Intrigued? Eurogamer has a few more words explaining the concept in full here. 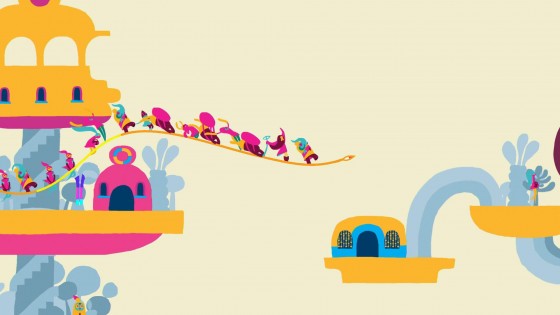 2D curio Hohokum from British game developer Honeyslug Games was the final PS4 game we played, although the term â€˜gameâ€™ is pushing it somewhat. Itâ€™s more like an interactive toy of sorts, with no rules or aim. There isnâ€™t even a tutorial.

Also due out on PlayStation 3 and PS Vita, you control a serpent known as the Long Mover. Long Moverâ€™s colour changes depending on which direction it faces, as does the colour of the PlayStation 4â€™s light bar. Youâ€™re free to explore the duo of colourful worlds and enjoy their audiovisual delights as you see fit, dropping off the weird little inhabitants at various different destinations and fooling around in pools of 2D liquid.

Not the best game to show off in a noisy atmosphere such as the Eurogamer Expo, granted, but weâ€™re glad Sony chose to as it’s looking like an ample time waster.