You can thank the helpful old dears at the charity shop in town for this article – if they hadnâ€™t put this book in their shop window then we wouldnâ€™t have popped in and bought it. 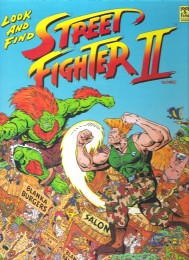 Well, perhaps not as odd as the GI Joe-inspired action figure line – which featured an armoured assault vehicle of all things – but certainly more than a little odd.

Zangiefâ€™s scene is a good example here – itâ€™s set in a Russian factory, as per the game, but itâ€™s a factory full of robots. Amazingly, this is an officially licensed product.

Blankaâ€™s scene is just as bizarre – as well as the green-hued beast, readers are also tasked with finding his fishing gear, including a pair of hip waders and a fishing creel. Surely Blanka would only have to get in the water and unleash his electricity attack to bag a big haul? 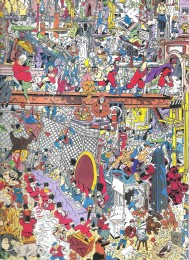 E. Hondaâ€™s diorama meanwhile is set in an aquarium and requests readers to look out for the sumo wrestler’s rubber duck, bubble bath, snorkel and squirt gun. Weâ€™re pretty sure E. Hondaâ€™s backdrop was a bathhouse and not an aquarium. Actually, weâ€™re 100 percent sure on that.

Like the ‘Whereâ€™s Wally?’ books visual metaphors are frequent, such as a â€˜card sharkâ€™ seen in Balrogâ€™s Las Vegas scene. Itâ€™s a shark playing cards, obviously.

The quality of the art-work is sketchy at best, but every inch of every page has something to catch your eye.

Characters from Super Street Fighter II feature as well, including Cammy. And whatâ€™s Cammy up to? Why, sheâ€™s fighting Frankenstein.

We think itâ€™s fair to say that this book was Â£3 well spent.