The prospect of time travel isnâ€™t quite as farfetched as you may think.

Within moments of loading up this movie tie-in we were transported back to the days when almost every licensed game was a 2D platformer, filled to the brim with enemies defeated by a simple bonk on the head and countless spinning items to collect.

Itâ€™s so alarmingly retro that it even has dim-witted enemies who walk straight into pits full of spikes. Now thatâ€™s a sight we didnâ€™t expect to see ever again. At least not in an almost full-price retail release, anyway.

The plot is the typical Smurf schlock involving Gargamel trying to capture Smurfette. Not only do the Smurfs have the possibly mentally unstable wizard and his cat to deal with though, but also Vexy and Hackus – the pale skinned duo from the movie. Evidentially tanning salons are yet to be introduced to the Smurf community. 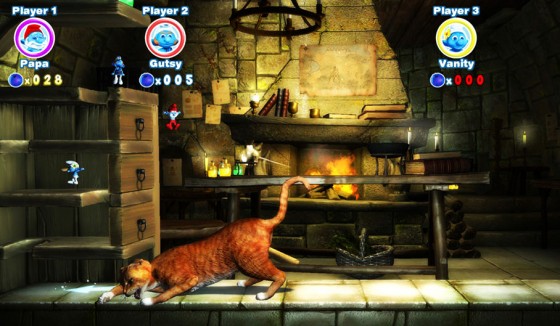 All four evil-doers turn up over the course of the game, either for a short-lived boss battle or by simply showing their faces amidst the reasonably attractive backgrounds.

It’s Gargamel who appears the most frequently of all, throwing a petty insult your way before making a few objects fall from the sky or opening up easily avoided holes in the ground. It’s simple, incredibly forgiving stuff. So forgiving in fact that it wasn’t until two hours in that our first Smurf snuffed it.

That was at around the game’s halfway mark – shortness is another issue, especially for those not interested in finding all the hidden gold coins scattered around the level.

To collect all of these, every level has to be replayed at least once and the stereotypical skills of the nine unlockable Smurfs used accordingly. By (allegedly) using advanced calculations Brainy Smurf can double jump, while Grouchy and Gutsy can smash stone blocks. Papa Smurf and Jokey meanwhile can throw projectiles.

Vanity Smurf has most amusing ability of all, and by quite some margin. The self-obsessed Smurf stuns foes by turning and facing a non-existent camera while pulling a face that resembles something out of Zoolander. This did make us crack a wry grin, weâ€™ll admit. 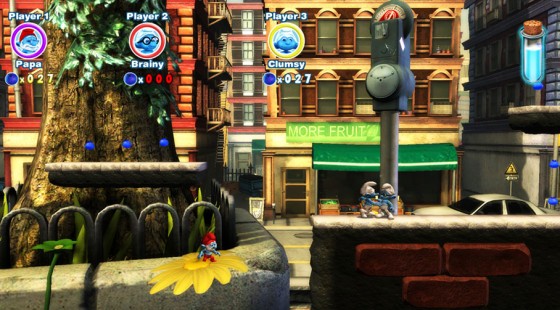 Developers WayForward are well-versed in 2D platformers, so it comes to no surprise that the fundamentals are present and correct. Presentation isnâ€™t too shabby either – the Smurfs themselves are well-animated and the stills during the cut-scenes are nicely drawn. We’re pleased to report that they feature the same art-style as Peyo’s original Smurf sketches, rather than the modern day CGI Smurfs. Curse their unnerving dead eyes.

Controls are responsive as well, although the ability to run would have improved the pace tenfold. At times itâ€™s even so slow that it could be considered dull. The lack of variety in the backdrops and scant use of set-pieces doesnâ€™t help here either.

Indeed, excluding the occasional vertically scrolling stage it can be hard to tell one level in a world apart from the next. As such, we were left with the impression that WayForward were facing a quick turnaround with this one. Boss battles are the only real highlight – a varied assortment of well animated creatures, complete some with good old fashioned attack patterns to learn in order to bag to an achievement for not taking a hit. 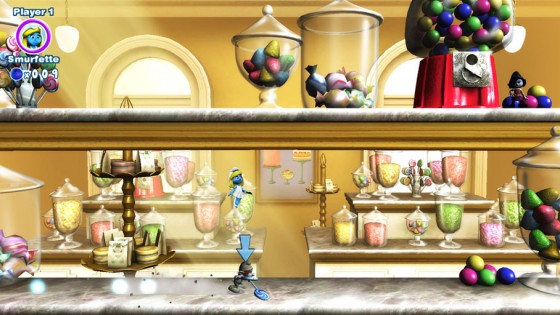 When this tie-in was first announced and we heard WayForward were at the helm we were expecting a half-decent New Super Mario Bros. clone at the very least. The pedestrian pace, formulaic level design and a distinct lack of challenge sadly prevents any favourable comparisons whatsoever. A four-player mode may be welcome news for parents looking to keep their posse of ankle biters quiet, but even then, we’d wager that their attention won’t be held for too long.

Rarely does a game make us wonder if the last 20 years of gaming ever happened, but The Smurfs 2 did just that.