Itâ€™s not like us to cover general gaming news, but todayâ€™s story regarding Activisionâ€™s Deadpool has piqued our interest. We arenâ€™t entirely sure though if itâ€™s for the best of reasons.

Not only has Activision confirmed that itâ€™ll be with us at the end of June â€“ just two months away â€“ but itâ€™ll retail for less than full price.

Itâ€™s set to cost $49.99 in the US (around Â£32) while previously the release date was simply â€˜TBCâ€™. This left many to speculate that it was due out much later in the year. 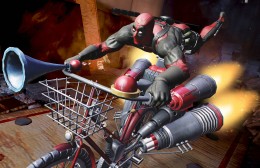 From experience, when a publisher releases a game at a lower price than usual it means that theyâ€™re compensating for something. Quality or length, usually.

Take Activisionâ€™s own The Walking Dead: Survival Instinct â€“ which retails for Â£34.99 – as an example here. Ever so slightly more recent is Dead Island Riptide, which was available to pre-order for Â£24.99 at a few of the online retailers.

Our cynical side thinks that Activision has lost all faith in the title (licensed games seem to be on the decline, lest we forget) and has told High Moon to wrap up development and get it out of the door as soon as possible. This would also tie in with the fact that Activision plans to cut 40 members of staff once Deadpool is finished.

However, our slightly more optimistic side would like to think that the price cut is in order to bag a few extra pre-orders â€“ which are likely to have been slow so far due to a lack of press coverage â€“ and that High Moon has been able to finish development completely in ample time. As we said earlier, the release date has always officially been â€˜TBCâ€™ after all.

Either way, even with the talented chaps at High Moon at the helm of â€˜the merc with a mouthâ€™ we have to be admit to being concerned now about Deadpoolâ€™s first proper videogame foray.