Capcomâ€™s hack â€˜nâ€™ slash RPG defied our expectations, and in the best possible way. When it was first shown to the world we thought it looked incredibly hackneyed while the online features sounded weak at best. Then when Capcom announced that an exclusive Resident Evil 6 demo was being bundled with it, we instantly jumped to the conclusion that it was going to be a bit on the smelly side.

To cut a long story short, we ended up spending 55 hours with Dragonâ€™s Dogma and enjoyed it massively. We even hailed it to be one of 2012â€™s biggest surprises.

The hack â€˜nâ€™ slash combat system made it incredibly accessible and although there was a learning curve it was only slight. Battling beasts was brutal and rewarding without having to resort to an overdose of gore, and even with dozens of detailed characters on screen there was barely a hint of slowdown. Every enemy, no matter how large or small, also had a weak point. Finding and exploiting these was a simple yet satisfying pleasure.

Another thing that made combat incredibly entertaining was the inclusion of a grab button. Such a simple idea, but one that quite literally took combat to whole new level. The larger enemies could be scaled to access their weak spots or to remove armour. It was also possible to grab hold of enemies and pin them to the ground for your fellow followers to strike. The ability to throw things added further nuances still, such as the ability to douse enemies in oil before using a fire attack. Many of the little touches such as this were left to be discovered by your own devices.

Whereas AI cohorts in RPGs usually hold back your progress with their quirky ways, the three AI-controlled Pawns which joined your quest actually helped rather than hindered. During battle theyâ€™d grow knowledgeable of the enemies they were facing, all the while providing helpful tips and strategies. Theyâ€™d also pick up any items you missed, which was very handy as the world of Gransys was a looterâ€™s paradise. Treasure chests, spoils from battle and more were vast in number and all served purpose.

Did we end up wishing there was online play? Perhaps, but thereâ€™s no denying that the ability to summon and swap Pawns was unique. This also gave combat a slight tactical feel â€“ when facing airborne foes it was vital to have at least one archer or mage in your party. Another nice touch was that when handed back to their owner the Pawns could be rated and ranked, and a parting gift could be given if feeling generous. In our case though we usually found ourselves being presented with rotting vegetables that weâ€™re informed â€œwould ravage the bowelsâ€. Charming.

Suffice to say, then, that we have a bit of a soft spot for Dragonâ€™s Dogma. We donâ€™t think weâ€™re alone either, because just over a million copies were sold. For a new IP it was a modest success. 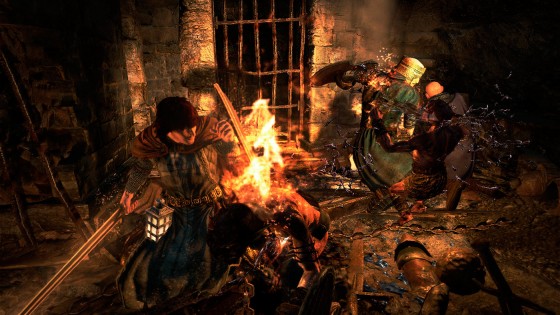 This re-release sees it get a second chance. The Xbox 360 version comes on two discs. One contains the full game along with the new Dark Arisen add-on; the other an install disc including optional patches for HD textures and the original Japanese voice-overs. The HD textures are easily noticeable and go a long way to compensating for the fact that Dragonâ€™s Dogma is knocking on a year old. The Japanese voice-overs on the other hand arenâ€™t to our taste although weâ€™re sure some will appreciate their inclusion.

When loading up an existing save youâ€™re presented with a handful of gifts â€“ 100,000 Rift Crystals, an array of new clothing and a ferry stone with infinite uses. The ferry stone seems to suggest that Capcom listened to the complaint that you could only fast-travel to locations once per ferry stone, which were in short supply. The Rift Crystals come in handy too. Not only are they used to summon Pawns above your skill level, but also to remove curses from virtues found in Bitterblack Isle.

Bitterblack Isle is where the new Dark Arisen quest takes place, and itâ€™s a location that more than lives up to its name. The hostile and dank isle is shrouded in moonlight which gives it a different feel to the areas found on the mainland. The isle can be visited at any time by travelling to the pier at Arisenâ€™s home town during the night, although itâ€™s suggested that only experienced players do so. Perhaps â€˜suggestedâ€™ isnâ€™t quite the word to have used there â€“ experience is downright vital.

Why youâ€™ve been summoned to the isle is at first a bit of a mystery, but as you make your way through the labyrinth of rooms all becomes clear. Well, slightly clearer.

Thereâ€™s no main mission other than to traverse into the depths of the isle and battle the evil inside, but there are notice boards around with a half a dozen or so optional quests. A couple of these we completed simply while exploring; others take a fair while to complete. A moonlit tower acts as a hub of sorts, with dozens of rooms and labyrinthine corridors branching off. Itâ€™s worth spending time exploring this ‘hub’, as treasure chests have been sneakily hidden and often contain artefacts only found on Bitterblack.

The fact that there are no new achievements is slightly disheartening

How long itâ€™ll take to explore the isle is hard to say as it all depends on your experience level. Playing as a level 58 warrior – and joined by two higher ranking Pawns – the first few larger enemies we faced went down without too much trouble. The later bosses though put up one hell of a fight. Their weak points really do have to be exploited here more than ever. One boss particular took us three hours of attempts to finally defeat, almost giving the notorious Ur Dragon a run for their money.

The challenging difficulty level makes the length of Dark Arisen hard to judge. It has even been said that those with characters less than level 80 will find it a struggle. Thereâ€™s no doubting though that there are plenty of ferocious battles to be had thatâ€™ll stay fresh in your mind for a long time to come.

In spite of this, the fact that there are no new achievements is slightly disheartening. We pretty much assumed that this expansion would add on the customary 250G. That said, we did manage to finally unlock the achievement for killing 3,000 enemies due to the high amount of enemy encounters Bitterblack contains. The wealth of new items should also help those who have been struggling to get the achievement for owning 300 different weapons and pieces of armour.

Another downer is that a few of the bosses have some rather cheap attacks. Weâ€™re talking about the sort that can make your health bar go from full to zero in an instant. Becoming cursed can be just as maddening at times. Thereâ€™s nothing worse than being turned to stone by an enemy and having no potion at hand to cure it. Pro tip: carry as much â€˜cockatrice liquorâ€™ as you can, because Bitterblackâ€™s vendor has only one in their stockpile.

Even if you only have a passing interest in RPGs, a second chance to sample Dragonâ€™s Dogmaâ€™s delights is one you should take. Considering it can be found for a ludicrously cheap Â£15 online, this time round there are even fewer excuses not to.