With the baton passed over to Bulletstorm creators People Can Fly, Gear of War: Judgment could have only really gone one of three ways:

Thankfully, the best case scenario has occurred â€“ the single-player campaign has had a significant overhaul, and although there is an undeniable sense of familiarity throughout, itâ€™s a pleasing one. Thatâ€™s the top answer, albeit slightly elaborated upon, if youâ€™re wondering.

The plot isnâ€™t quite as epic as before, if youâ€™ll excuse the pun, but itâ€™s a story thatâ€™s told well. Lieutenant Baird, Cole and two newcomers â€“ the Russian-sounding Paduk and female cadet Sofia â€“ find themselves handcuffed and stood in a courtroom under the charge of breaching military procedures. Their story is then told via flashbacks leading up to their incarceration, with each character getting the chance to explain things from their own perspective.

Levels are now shorter and score-based, designed with replay value in mind. Factors for bagging three stars on each level include taking down the enemy with headshots, exploding them into chunks of flesh, performing executions and earning ribbons by achieving certain feats in battle. Thereâ€™s no penalty for the amount of time each mission takes – which is fine with us as it would discourage exploration – but the amount of times youâ€™ve been â€˜downedâ€™ does affect the score at the end.

Enemy encounters are more frequent, with the Locusts attacking in greater numbers. Fortunately for our battle hardened COGs, the war-torn environments have plenty of explosives and weapon stashes dotted around. Taking down four or five enemies with one grenade was quite a rare occurrence in the past; now itâ€™s a regular sight. 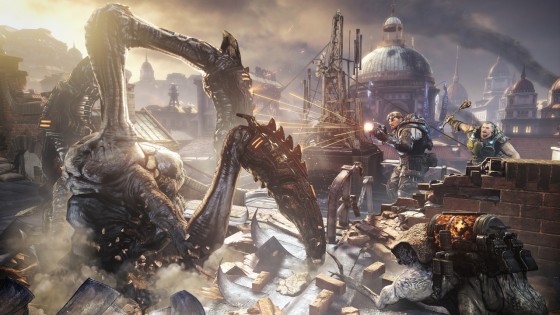 The new focus on relentless carnage is apparent right from the start – as soon as the first mission the Locusts come clutching the heavy firepower. There are a few new weapons to play around with too, including the self-explanatory Tripwire Crossbow and Booshka Grenade Launcher. These new additions fit into the Gears universe perfectly, although the Breechshot (a sniper rifle without a scope) and Markza Sniper Rifle do make a few of the older weapons such as the Hammerburst seem redundant.

“Levels are now shorter and score-based”

At the start of each section thereâ€™s a chance to accept a â€˜declassified challengeâ€™ that alters missions parameters. These challenges vary from having to use certain weapons, which are usually an assortment against your favour, to having the field of vision obscured with smoke or gas. A significantly high amount of extra points will be awarded if successful. And what do points make? Prizes. In this case, unlockable characters and weapon skins.

People Can Flyâ€™s pacing isnâ€™t quite as proficient as Epics. Not in the sense that the checkpoints are too far apart â€“ if anything, theyâ€™re placed closer than ever â€“ but the fact that a lot of the missions tend to blur into one another. There are a fair few standout moments though, including a raging beach landing battle. Elements from Horde Mode have been incorporated into single-player too, and brilliantly so. Every few missions youâ€™re instructed to hold ground and set up a perimeter, during which youâ€™re given just over a minute to set up gun turrets and find a decent pairing of weapons.

The AI of your comrades impresses the most during these defence sequences. They’re so proficient in battle now that we even caught them stealing our kills. There were still a few occasions when we cursed the AI for not healing us sooner, but these were few and far between. Another observation is that the enemy arenâ€™t quite so quick as before to perform executions when youâ€™re down, thus giving you a better chance of being saved by a team-mate. This did make the single-player seem slightly easier than its predecessors, but rest assured that both â€˜hardcoreâ€™ and â€˜insaneâ€™ difficulty levels are present, with the latter not unlocked until after the story has been finished.

Once a certain amount of stars have been obtained in the main campaign a second chapter opens up entitled Aftermath. This optional side-story takes place during Gears of War 3, filling in a part of the storyline. There are no score-based features here â€“ itâ€™s a traditional Gears of War affair with levels that are larger and longer. Thereâ€™s a decent sniper battle to be had along with a zip-wire scene that would make Lara Croft jealous. Some weapons not found in the main campaign make an appearance, such as the underground explosive Digger launcher. Those who aren’t convinced by the main campaign’s new direction will find solace here, if only for the two hours or so that it lasts. 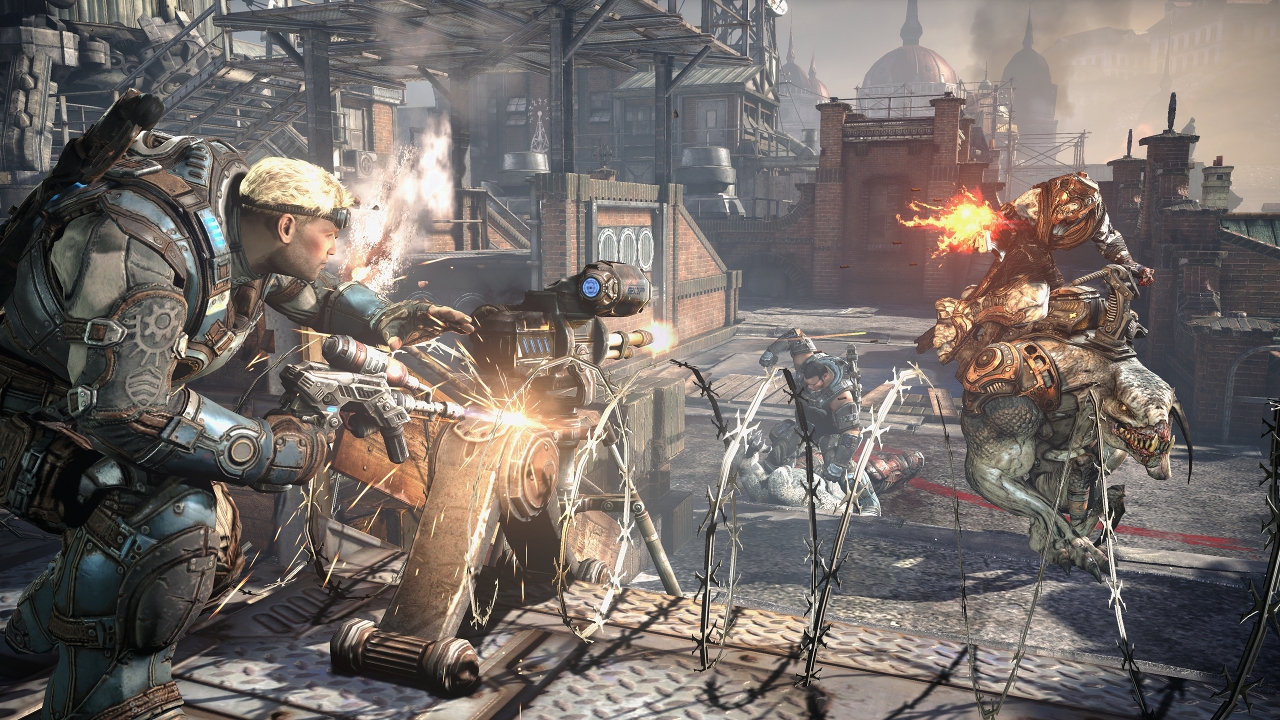 As well as the campaign mode, People Can Fly has been busy giving the multiplayer modes a shake up. Horde Mode has been replaced with a new Survival Mode, and thereâ€™s a new class-based deathmatch which is an evolution of Gears of War 3â€™s Beast Mode. The omission of Horde Mode is pretty disappointing, and although Survival Mode is similar, itâ€™s simply not as involving â€“ bases cannot be built or improved, thus removing any strategic elements. The idea here is to protect a covered-up Locust emergence hole, and should the AI-controlled Locusts damage the protection around it, the round ends and the COGs fall back to another location on the map. If the Locusts manage to destroy the final location â€“ a power generator â€“ then the match is over. Matches are short and frantic as the Locusts always destroy their targets without haste.

Thereâ€™s a choice of four different classes when playing Survival, including medics that can throw healing â€˜Stim grenadesâ€™, and engineers who place automated turrets and fix the electric fences that are already placed on the map. From our experience so far the majority of players favour the engineer. Those turrets notch up an awful lot of easy kills.

We observed the same thing in OverRun matches. During some rounds all five players were engineers, placing their turrets of death haphazardly. So much for players picking a balanced array of character types. We should point out though thatâ€™s not a fault of the developers. The opposition meanwhile gets to play as the Locusts, ranging from grenade carrying grunts to the centipede-like Serapedes. Battles can be quite tense; as always the multiplayer battles are well balanced. â€˜Shotgun rollingâ€™ is still a thing, mind.

Map design remains masterful throughout, although at the moment theyâ€™re short in number. More are due soon however via a free update. The library map in particular has all the hallmarks of a future classic, featuring a large spiral tower thatâ€™s idea for sniping and secret paths activated by pushing switches hidden in the bookcases. The OverRun maps also have special pathways for the Tickers to run along without being blown to bits. Itâ€™s hard to think of another shooter of recent times that has maps just as superbly designed.

“as always the multiplayer battles are well balanced”

Characters can now be customised using items from the â€˜Epic mystery boxesâ€™ that are awarded after levelling up. Most weapon and character skins are ill-fittingly brightly coloured, so donâ€™t be surprised to find people running around looking like theyâ€™ve just left a â€˜90s rave. The chance to buy them with Microsoft Points is there if you want to open your virtual wallet.

Also of note is that a lot of the achievements are now based around multiplayer. No less than three involve becoming Gears of Warâ€™s equivalent of â€˜Prestigeâ€™ and then starting over again from scratch. It’s easy to get the impression that Microsoft wanted the multiplayer aspect to be a longer lasting experience this time round. This could be because the publisher has very few other Xbox 360 games on the way, due to currently focusing their attention on the next Xbox.

What we have here then is a decent enough addition to the Gears of War saga. It doesn’t quite make the same impression that Gears of War 2 or 3 did, but it is a whole lot more fun. We think most people would agree that’s what attracted us to playing videogames in the first place.