Those with over-active minds, such as ours, have often wondered why Sega chose to bundle Altered Beast with the Mega Drive. It wasnâ€™t exactly a system-selling game in terms of quality, and that’s us being kind about it. 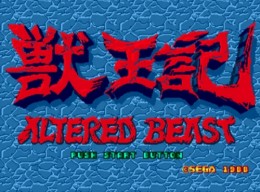 But ask yourself this â€“ what game should Sega have picked instead? The five other games that accompanied the system’s American launch in 1989 were hardly ground-breaking either.

Alex Kidd in the Enchanted Castle and Last Battle failed to show off what the Mega Drive could do, and although Thunder Force II and Space Harrier II were a darn slight more impressive they were presumably ruled out due to being sequels. Thunder Force II wasnâ€™t developed by Sega either, only published. This leaves us with Tommy Lasorda Baseball, which was of niche appeal. Also: who the hell is Tommy Lasorda?

By the time the European released loomed a year after the system launched in the US, Segaâ€™s decision was already set in stone â€“ youâ€™re getting Altered Beast, like it or lump it.

Itâ€™s easy to forget now though that it was quite an impressive game at the time, especially when shown side-by-side with your everyday NES title â€“ the system that was owned by the majority of Americans. It had large sprites, sampled speech and screen-filling bosses, not to mention neat transformation animations. It was a relatively violent game too, which was sure to appeal to some. Zombies shuffled along the screen with limbs missing; the first boss could rip off his head and lob it at you, only to sprout another mere seconds later. 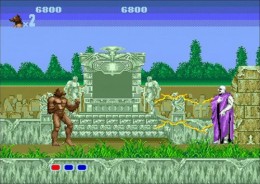 Itâ€™s often believed that the Mega Drive version was identical to the arcade original but thatâ€™s not quite the case. The Mega Drive version had fewer frames of animation and was missing an effect that sent chunks of rotting flesh flying towards the screen when killing an enemy. It was still mighty close and a fair sight better than the Master System iteration which was single-player only and missing a stage.

The amount of formats the game made it onto is somewhat surprising â€“ over ten in total including, believe it or not, the Famicom. Surprising because, well, Altered Beast is often referred to as being one of the worst games of that era.

Going back to its arcade roots, the screen was constantly pushing the player forward, thus removing any chance of exploration or going back to defeat any enemies that gave you the slip. It was the collision detection that was the worst offender by far, however. Getting hit by an enemy just once was a rare occurrence. You were more likely to take damage from one enemy, then get shoved into another, and then bounce back off that one onto the original attacker. This made things feel rather frustrating, as it lead to countless cheap deaths.

The first level was at least a simple affair designed to ease you in. Greek God Zeus brings back the protagonist – a Roman Centurion – from the dead by commanding him to â€œWise frowm your gwaveâ€. His mission? To save Zeusâ€™ daughter Athena from a Neff, a demon God from an underworld.

By attacking the white wolves that dashed across the screen spirit balls could be obtained that allowed the nameless hero to increase in size and strength. Collect three of these and a transformation would occur, with the first being a werewolf with the ability to throw fireballs. Bosses could only be faced if three spirit balls had been collected. If not, Neff would simply vanish off the screen to allow you to face some more of his minions. 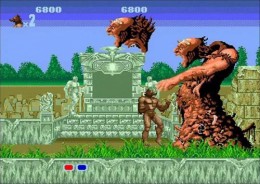 The first boss was easily the most impressive â€“ a huge red ogre formed from a pile of rotting corpses. After dodging the heads he throws and lobbing a few projectiles his way, the red fellow was soon history. The end of each stage finished in an identical manner â€“ with Neff stripping the hero of his newly found powers, and then vanishing off to another part of the underworld.

As soon as the second stage the difficulty level ramped up. This cave level included blob-like enemies that would unpredictably attach themselves to the playerâ€™s head, along with dragons that emerged from the ground and descended from the ceiling. This level also featured an enemy known as a â€˜chicken stingerâ€™ which became a rideable mount in Golden Axe. The transformation for this stage was arguably the best of the lot â€“ a dragon with the ability to throw thunder bolts and cast a barrier of thunder. The latter ability was very handy for finishing off the boss â€“ a plant-like creature mostly consisting of giant eye-balls. By positioning the dragon at the top-right of the screen and hammering the attack button to cast a thunder shield, this beast could be beaten in just a few seconds.

The third level – known as the â€˜Cavern of Soulsâ€™ – was easily the most unintentionally hilarious and for a couple of reasons. Firstly, the enemies were so brainless that theyâ€™d walk straight down the holes placed at the bottom of the level, thus plunging themselves to their doom. Secondly, the transformation for this stage was a rather harmless looking bear whose projectile attack looked like nothing more than a speech bubble. The boss was slightly more menacing thankfully â€“ a large shell containing a salamander that was only vulnerable when poking its head out. 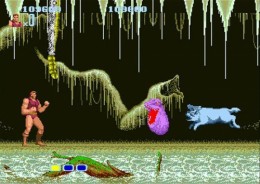 Neff’s Palace â€“ the fourth level â€“ was something of a swizz. There was only one new enemy to encounter here â€“ a flying demon holding a sledgehammer â€“ with the rest of the enemy assortment being tougher versions of enemies seen before only with alternative colour palettes. To top it off the boss was also laughable when compared to the previous three â€“ a floating crocodile with a huge red belly. A golden tiger was this levelâ€™s transformation, complete with the ability to throw wavy-golden balls across the screen.

It seemed that the developers were holding back their creative talent for The City of Dis â€“ the final stage. The colour palette was a bold one, featuring such enemies as bright pink unicorn men and bipedal goats. The transformation wasnâ€™t a unique one though â€“ it was simply a golden version of level oneâ€™s werewolf. The boss for this one may ring a bell â€“ Neff took the form of an armoured rhino, which made an appearance in Disneyâ€™s Wreck-It Ralph.

Altered Beastâ€™s ending is one of the more humourous ones. After defeating Neff and being reunited with Athena the ending credits rolled where it was revealed the whole thing was nothing but a play featuring actors in costumes. This was the case for the arcade version at least â€“ the ending was changed for the console versions for reasons that are clearly disappointing. The gameâ€™s shortness is another downfall. It can be beaten in around twenty minutes.

Now hereâ€™s the thing. Despite being poor, Altered Beast is a game thatâ€™s very well remembered â€“ every gamer worth their salt has heard of, if not played or owned it at some point. Does this make it a classic? We asked our Twitter followers:

Answers are, somewhat unsurprisingly, mixed. Some claim it to be an outright classic while other point out that it hasn’t aged well at all. It is though clear that the concept was something the majority of people like the idea of â€“ the Greek mythology setting and idea of being able to transform into various beasts were innovate at the time.

It’s a work of flawed genius, then – a classic for all the wrong reasons.

Sega themselves must consider it in high regard otherwise they wouldnâ€™t have re-released it on the likes of PSN, XBLA, Wii Virtual Console and iOS. 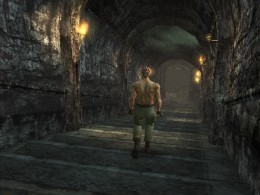 Youâ€™d think that with millions of copies produced it would have received a sequel. This wasnâ€™t the case, but there was a third-person brawler released on PlayStation 2 only in Japan and Europe. The story was set in modern times involving a genetically enhanced solider on the run from the army. Itâ€™s not the easiest of games to find but worth tracking down for the unintentionally amusing merman transformation alone. 2002â€™s Altered Beast: Guardian of the Realms on GBA â€“ which was published by the now defunct THQ â€“ isnâ€™t particularly easy to find either but better than you may expect.

Has this article left you wanting to read more about Altered Beast? Have a look at this article on Destructoid where itâ€™s compared to Citizen Cane, of all things.

Oh Altered Beast, what a bizarre and curious thing you are.