Sega were determined not the repeat the mistakes from their past with the Dreamcast. Unlike the Sega Saturn they had a Sonic game ready for launch, third-party support was strong, it was easy to develop for and the system had well over 20 games ready to ship alongside it. 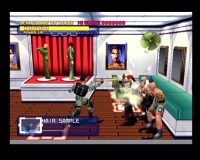 Dynamite Cop was a launch title, and although it wasnâ€™t bad you did feel that Sega only converted it from arcade to Dreamcast to get the software numbers up. It could be beaten in less than half an hour making it very poor value for money. Just think, you could have picked it up during a midnight Dreamcast launch and have it done and dusted before turning in for the night.

Thereâ€™s a hint of Die Hard Arcade about it as this scrolling beat ’em up is actually the unofficial sequel; the original was known as Dynamite Deka which Sega reskinned with the Die Hard license for Europe and America.

The game kicked off on a luxury cruise liner – where the presidentâ€™s daughter is being held by modern day machine gun carrying pirates – and then after a short swimming mini-game the story then concluded on an tropical island. Dress sense was not this band of pirates’ forte – most looked like they were wearing fancy dress, appearing in brightly coloured outfits. One was even dressed up like a Ninja Turtle.

Three playable characters were on offer â€“ two male cops and a female cop. On the character select screen one of the males had a monkey on his shoulder, but the simian didnâ€™t appear in the game at all. If we were reviewing this weâ€™d knock a point off for that.

Fights took place in small rectangular rooms with short QTE events linking the locations together. Mess up a QTE event and youâ€™d have to fight off extra bad guys. Every location had weapons to pick up and use, with the most ridiculous being a cannon that fired a nuke, creating a giant mushroom cloud. 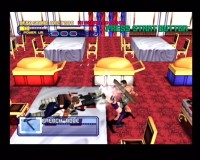 The last section featured a boss that was clearly designed to make people pump cash into the coin-op â€“ his attacks were both unfair and devastating. Thereâ€™s also a twist near the end, although itâ€™s not really worth playing through the game for. There is something worth seeing though â€“ one of the beasts from Golden Axe made an appearance towards the end, seen trapped inside a cage.

Despite having a pleasingly silly streak, back in 1998 Sega should have really charged Â£19.99 for this and not full price. Or better still – not bothered at all and instead used their resources to turn the infamous Scud Race tech demo into a full game.