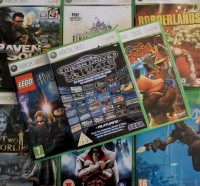 LEGO Harry Potter has examples of both of the above â€“ play as Snape and hide in a barrel to unlock an achievement called â€˜Solid Snapeâ€™. Clever, but not as clever as turning the music and sound effects off in the menu while exploring the library to get the â€˜Quiet please!â€™ achievement.

Ghostbusters: The Video Game was a treat for film buffs as every single one was named after a quote from the film. There was also 5G to be earned for sliding down the pole at the Ghostbuster’s HQ. ‘You gotta try this pole!’

It was Capcomâ€™s Dead Rising that was one of the first games to prove that achievements could be fun and creative. Knocking down ten zombies with one bowling ball wasnâ€™t quite as easy as it sounds â€“ you had to find a large group of zombies in order to increase your chances of knocking down the quota. A similar achievement required 30 zombies to be knocked down with one parasol which needed a clear run where you could get plenty of momentum.

Kicking a chicken in Fable II meanwhile was poultry in motion.

Rare has always had a silly streak and achievements have let them express it even more. Fun could be had in Banjo-Kazooie: Nuts & Bolts by dragging the giant football on the test track into a pipe to get â€˜Floater in the pipeâ€™, and pushing one of the cow-like creatures into a volcano to unlock â€˜BBQ Beefâ€™. Viva PiÃ±ata Party Animals wasnâ€™t by Rare but also had a creative achievement â€“ the manual had a hidden code consisting of an image a joypad button on every page. If you input the code in the order shown in the manual while on the title screen an achievement unlocked. It was in fact the infamous Konami code, but letâ€™s not tell Konami that.

Portal: Still Alive let Valve show off their creativity too â€“ it was possible to finish the game without unlocking a single achievement. And who could forget sending Gnome Chompski into space in Half-Life 2? Here you were required to carry a gnome through most of the level, thus putting yourself at risk, before chucking it into a space shuttle. Gnome Chompski later turned up in Left 4 Dead 2, where he had to be taken to the end of the level to unlock â€˜Guardinâ€™ Gnomeâ€™.

More recently, Raving Rabbids: Alive & Kicking has required some thinking outside the box. Playing one of the mini-games with your feet instead of your hands unlocks a you-know-what. During another youâ€™re tasked with harming a Rabbid by getting him to walk into traps; if you guide him to safety though, which is the opposite of the aim of the game, then another unlocks. In a different mini-game you have to prevent Rabbids from running over to a huge stand of hotdogs but, again, if you ignore the rules and let all the Rabbids though the â€˜Oleâ€™ achievement can be yours.

Sign up for Ubisoftâ€™s Uplay service and youâ€™ll also be treated to an achievement called â€˜Youâ€™re Completely Uplayâ€™. Childish? Us?

Both Raving Rabbids: Alive & Kicking and Dead Island have time sensitive achievements. In the former if you play the game six months after you started it you unlock â€˜Still at It?â€™ worth a handsome 30G and in Dead Island the â€˜How many days exactly?â€™ achievement for playing 28 days after first starting. In both cases the Xbox 360â€™s clock can be altered so that they can be gained instantly.

A lot of the first person shooters have achievements for X amount of kills with a handgun. Typically handguns are weak so you automatically find yourself using cover systems more and being more tactical with your approaches. FPS usually have achievements for killing X amount of bad guys with explosions too, and so you find yourself luring enemies towards explosive barrels or using grenades more and trying not to get caught in the blast.

Geometry Wars tasked gamers with not shooting anything at all â€“ to unlock â€˜Pacifism’ you had to avoid enemies for 60 seconds. Arguably this achievement spawned Geometry Wars 2â€™s Pacifism game mode where you had to avoid enemies to win. This mode had its own achievement â€“ rubbing against the walls of the level, which was hard to get as most enemies spawned near the gridâ€™s walls.

Having to play Guitar Hero with your left hand to get â€˜Leftyâ€™ was challenging too. Unless youâ€™re naturally left handed, of course.

Next week we take a look at the nonsensical achievements out there – the ones that you donâ€™t really have to achieve anything at all to get.