Gears of War 2 is a typically decent sequel, improving on the original in every way possible. It looks and sounds amazing, while the new weapons – including a flamethrower and mortar cannon – have their shortcomings as well as strengths. Which is good. The new multi-player team-based horde mode is stupidly addictive, and the story expands on why the locusts are attacking the humans, which evokes an imposing sense of humanityâ€™s desperation. 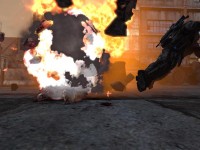 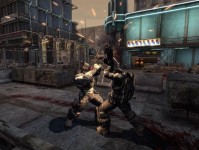 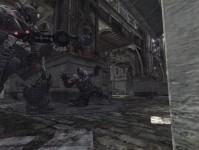 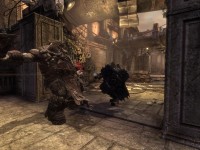 One new feature thatâ€™s bound to get ignored, though, is this: once youâ€™ve popped your clogs in multi-player you can turn into a â€˜ghost cameraâ€™ and float around taking photos. These can be uploaded and are rated depending on whatâ€™s going on in the shot.

These are a quartet of the better snaps Iâ€™ve taken. Clockwise from top left: one of the button bashing chainsaw duels; a pretty explosion; Cole sky diving without a parachute; and the new boom shield being used wisely.

I think Iâ€™m probably a better war photographer than I am solider – Iâ€™m currently struggling to get any further than wave 16 on horde mode.