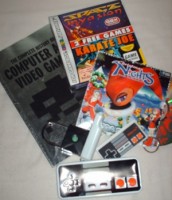 We Brits may get our games later and often at inflated prices, but there is one advantage we have over our American friends: a continuous flow of free gifts stuck to the front of our video game magazines, some of which are actually worth the price of the magazine alone.

These are some of the best from over the years.

Game Over: How Nintendo Conquered the World
Arcade

Searching for this book on Amazon.co.uk brings up a nice surprise: it sells for quite a bit now, though the free edition for less than others.

The book details how Nintendo went from playing card manufactures in the late 19th century to console giants almost a hundred years later, with several chapters dedicated to the infamous Tetris legal rights battle. It was outdated even when it was given away for nowt, ending around the Nintendo 64 era, but a very interesting read nonetheless.

Christmas NiGHTS was originally an incentive to buy more Sega published Saturn games – purchase any two and you would have received this yuletide treat. To much rejoicing, a couple of months later it appeared on the front of Sega Saturn Magazine.

Itâ€™s essentially a glorified two level demo of NiGHTS, but with snow on the ground and holly wreaths replacing the coloured rings NiGHTS has to fly though and such. Itâ€™s all bound together with an advent calendar featuring new items to unlock, including the ability to play as a certain hedgehog.

Sega Saturn Magazine later gave away the entire first disk of Panzer Dragoon Saga, which took hours and hours to finish. Back then this was akin to the Official PlayStation Magazine putting the first disk of Final Fantasy VIII on their cover, and something very special.

The Complete History of Computer and Video Games
CVG

Another book, but this time with a shiny cover. Mmm, shiny! This full colour beast was packed with images and took longer to read than the magazine it came attached to. It ends in 1996 – the year it was given away – celebrating Super Mario 64 as â€˜the best game everâ€™. Which it still is. Maybe.

This magazine must have sold out instantly when it hit shelves, as the only copy I ever saw for sale was the one I bought. Itâ€™s an unofficial Game Boy Color cartridge – you know, the type that Nintendo just loves – featuring clones of Space Invaders and Kung Fu Master. They even bothered to put it in a cardboard case.

Itâ€™s hard to pin point what made Wipeout memorable. The weapons? The insane speed? The Designers Republic logos? The music? If you agree that it was the last one, then this CD would have been ‘right up’ your ‘street’. They had to remove the Chemical Brothers track that was listed on the back of the cover though, presumably because their record company got the arse about it.

Apparently Sega went ballistic when they found out that this rather harmless looking cheat CD had a hidden function – it let you play imports without having your Dreamcast modded. This also meant that illegal bootlegs could be played, although pirates soon found a way to make them self-booting anyway.

CUBE Magazine also gave away a GameCube cheat disk that let you unlock all of the NES games in Animal Crossing including Mario Bros. and Zelda. Shame CUBE was a load of dump though.

I just like it, okay? Itâ€™s rubbery and keeps my keys together.

And the best free gift that never was? Thatâ€™ll be Zed-Twoâ€™s Wetrix for the PSone. It was certified and ready for release but the publisher went bust, so Zed-Two arranged to put it on one of the Official PlayStation Magazine demo disks, only Sony said â€œNo!â€. The swines!