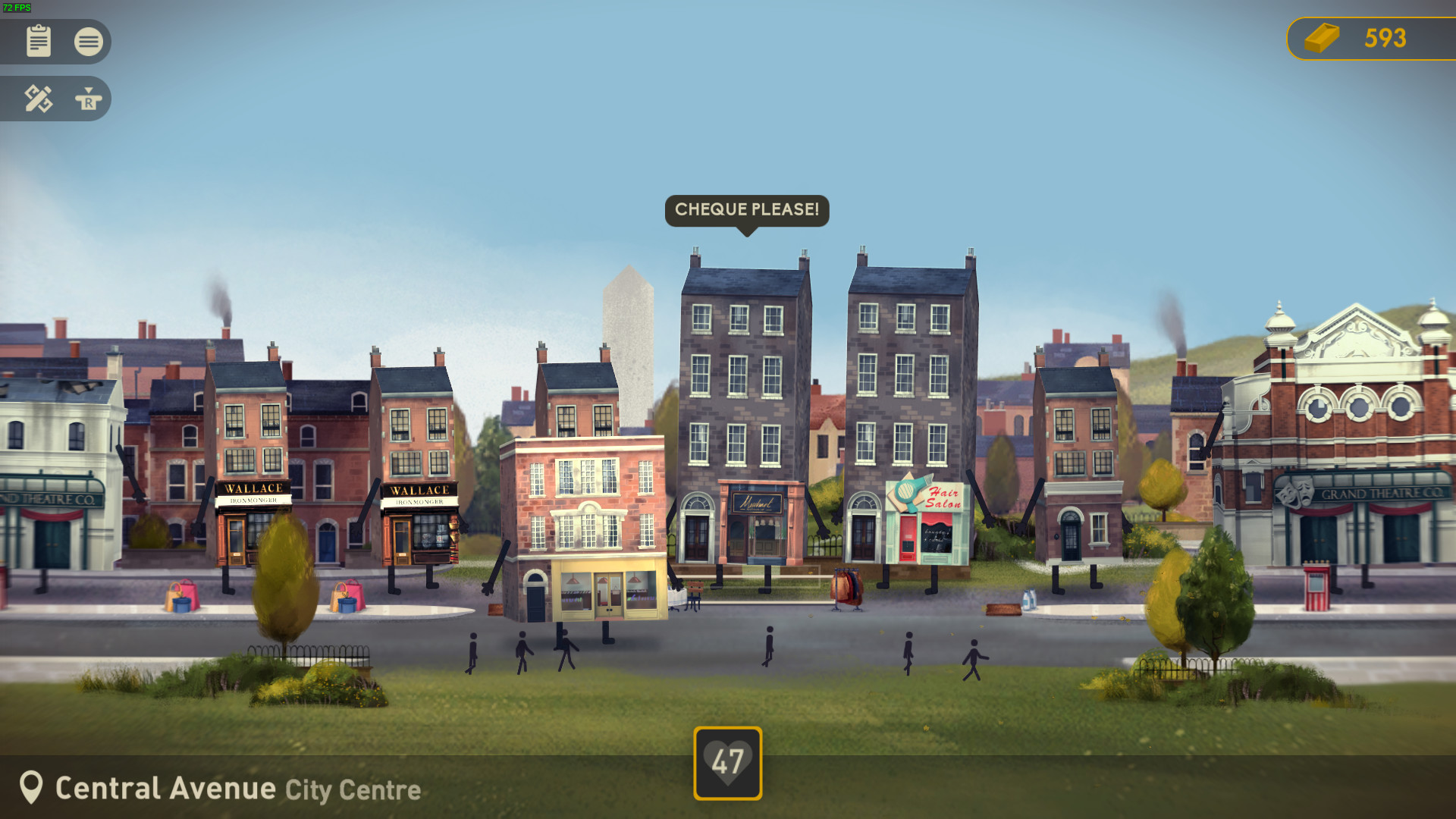 I’ve played a couple of games recently that should’ve never left the playable prototype stage. Both had novel control schemes that broke convention, and ultimately, suffered because of it. They took the mechanics and physics from one genre and tried to adapt it to another to make something fresh and new. The more I played these games – Skully and Steel Rats, if you’re wondering – the more I realised how conceptually flawed they were. They may sound fun, but they really aren’t.

Sadly, Buildings Have Feelings Too follows suit. The concept sounds excellent on paper. Smart, even. In this management sim, the buildings are the stars – they have comical personalities reflecting their nature of business, strutting around with a sense of purpose and pride. The grocers feels fit ‘n fresh, the pub is full of cheer, and the chimney stacks cough. They crack jokes and even have disagreements when personalities clash. Puns are in abundance, and a reference to The Simpsons (“Everything’s coming up Mill House”) also managed to induce a grin.

Every building thrives when placed next to certain other businesses, and so it’s your job to create a harmonious community, carefully thinking about what to place where. Offices love a bakery nearby, factories flourish if near a pie shop, and residents need a grocer. Dozens of combinations exist, and the logic has sound reasoning. Well, aside from the fishmonger somehow benefiting from having an ironmonger next door. Something to do with scales, perhaps?

Coupled with bold presentation and an appealing visual style, it’s easy to see why publisher Merge Games picked this up. It’s conceptually different enough to stand out in a crowded marketplace.

Play Buildings Have Feelings Too for just an hour or so, however, and you’ll realise that not only does it fail to excite, but it also flat-out fails to engage. It, quite simply, entails placing buildings in a row – with a limited range available initially – before duly moving them around until obtaining the perfect arrangement. Instead of a cursor, you control a portly town hall persona, resulting in constantly strolling from left to right – and back again – as you manually relocate buildings. For the most part, it feels more like a puzzle game than anything else. A painfully fussy puzzle game, at that.

If the chemistry between buildings isn’t quite right, it’s possible to either change business – ergo replace a business with a homestead – or destroy them outright and try again. Most actions eat into your supply of bricks (the in-game currency), which also governs how much you can build. Bricks are only replenished once completing an objective or by levelling up perfectly placed properties, although it is possible to claim some back by reducing buildings to rubble.

Rather than take the form of a sandbox building game, the focus is on ticking off objectives. After working your way through these the next location unlocks, taking our portly lead out the city and into more rural areas. While you may be forced to work with limited resources, you’re never forced to second guess potential synergy – buildings will, quite literally, tell you what they want nearby – which renders most objectives a case of following linear processes. Build this, this and this, and voila.

Each location takes 2-3 hours to complete. During that time, you’re left to glance at the same street with its single static backdrop (there’s no day/night cycle), while listening to the constantly looping music – instead of a jukebox full of tunes, each location only has a single BGM. Construction sims usually keep me playing for hours, but the lack of variation here resulted in very short sessions.

To make matters worse, glitches are common, such as the brick counter resetting and damage meters lingering mid-air even after that building is no more. I was also left wondering what would happen if I messed up a street entirely by consuming all available bricks as there’s no way to restart a stage or load a past save. A single save slot is all you get.

Buildings Have Feelings Too isn’t a case of a missed opportunity – it’s beyond that. A perfect example of why some ideas – as appealing as they may initially seem – should be left on the drawing board. It’s the video game equivalent of arranging books in alphabetical order – lay everything out and then place accordingly. Honestly, this is the first game I’ve ever played, in some twenty years, that would be better suited to a webcomic or perhaps a range of novelty greeting cards.

There really is a first time for everything.

Buildings Have Feelings Too! is out now on PC, PS4, Xbox One and Switch.

SCORE
3
Buildings Have Feelings Too!