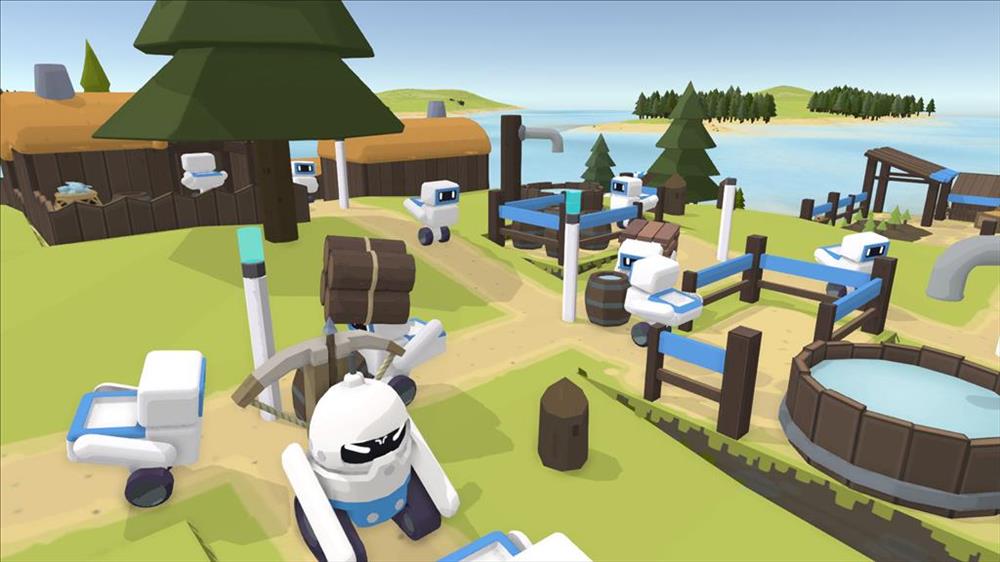 Inspired by The Settlers and the Anno series, settlement builder The Colonists puts you in control of self-replicating robots intended to simulate human civilisation. Now there’s a tongue twister. The PC version failed to generate much of a buzz, so this week’s console iteration is a second shot at success.

It appears to be going down reasonably well due to its relaxing and easy to pick up nature, gaining an 8/10 from Finger Guns and a 3.5/5 from The Gamer.

Skate City is another multiformat game hitting Switch this week. This realistic 2.5D skateboarding sim is also scoring well, including a 7/10 from Nintendo World Report, who call it a “breezy, no-stress experience that’s addicting for 15-minute intervals.”

Then there’s Save me Mr Tako: Definitive Edition, which you may recall from a few years ago. It was originally published by Nicalis, but then delisted after the developer decided to go their own way. Improvements to this Game Boy-style platformer include balancing changes, a hint system, additional difficulty modes, a jukebox and more. The first review out the door is a glowing 9/10 from But Why Tho, who described it as a mixture of Kirby and Shantae.

Anything else? Well, maybe…if you know where to look. Arcade shooter Raiden IV x MIKADO remix arrives on the US eShop this week. Featuring all-new remixed music, it reportedly remains just as fresh as it was in 2007.

Coast through three iconic locations based off of real-world skate spots in Los Angeles, Oslo, and Barcelona.

Pull off realistic tricks with ease and skate just like the pro’s.

Hundreds of combinations are available, including flip tricks, grabs, grinds, spins, and manuals.

Complete over 100 challenges or chill out and ride at your own pace with Endless Skate.

Customize your skater by picking up a new deck, trucks, wheels, shoes, hats, glasses, and clothes in the skate shop. You can also change your hair style, and skin tone, or unlock new moves and upgrade your abilities.

Capture and share your best runs with our in-game recording tools. You can zoom in, use a fish-eye lens, spin the camera and even slow down time to highlight your best tricks!

There is a story behind every goal. You’re Rocco Galliano, the existentially troubled manager of a struggling football team. Train players, choose your own narrative, survive the drama, and play turn-based football matches via tactical cards and hard choices.

Survive, gather resources, expand your crew, improve your starship, and pave the way through outer space – full of hostile races. Your path will consist of difficult choices and everyone will have an influence on the outcome.

…and perhaps you might be able to solve the mystery of this universe.

Tomoyo finds himself at his grandmother Umi’s beach resort, looking forward to a great summer where he can finally put the past to rest and possibly take his life forward in a better way than the coasting he was doing up until now.

Of course, there is always a catch…

And now it looks like his summer vacation is dashed on the rocks before it begins.

The only upside is the many beautiful female staff members working at the resort.

My fast food Booth is a casual fast food burger tycoon game where you need to fullfill each customers request by stacking up the requested burgers or drinks with the various ingeredients.

This is a unique block-busting game in which you destroy all the blocks placed on the stage to evolve the illustrations of cute girl characters.

Be ready for the Techno Tank experience!

Deafest the enemy tanks while dodging their deadly bullets.

Improve your aim and maneuver skills while surviving a crazy retro bullet hell.

Level by level the enemy’s tanks get faster, smarter, and deadlier.

Can you defeat them all?

The Colonists is a relaxing city building game. Each bot has a job to fulfil, from harvesting crops and fishing at the lake, to transporting resources and discovering distant lands.

You’ll advance through three different Ages as you build infrastructure for your colony by constructing road, boat and train transport systems. Help them work together to achieve automated harmony.

Take on a series of individual campaign missions, play randomly generated maps, compete on player-designed creations or build your colony unfettered by any constraints in the sandbox mode.

Explore, research, manage, tweak and refine to your heart’s content.

You will be making one and the same choice again and again deciding who the son should become – a lamplighter or a tallyman. At first it may seem that the situation leaves you no choice at all. But don’t jump to conclusions, take a moment to think it over and then, perhaps, you’ll see your story in full color.

On Halloween Island, engineers test the innovative way of generating heat. The roots of the power plant reach deep into the earth, all the way to the heart of Hell, where the reactors obtain energy from burning souls. When an accident happens, the infernal radiation contaminates the earth. Inhabitants living in defiled areas struggle with numerous possessions. An exorcist is needed.

Total Arcade Racing is a tribute to classic arcade racing games where you zip around in closed circuits. Play solo or up to 8 friends on the same TV in various game modes.

Compete with players from around the world and see if you can reach #1 in the Hall of Fame leaderboard.

Classic Texas Hold’em gets a magical twist at the Fantasy World casino, where you’re invited to play at tables against 16 Pretty Girls, from elves and demons to sorceresses and more! Each female opponent has her own look and unique style of play, along with Japanese voiceovers to let you feel their excitement in the intense poker battles. Start out against 4 of these gorgeous players and unlock more as you prove your skills worthy of new challengers.

There are 2 game modes to choose from – In Pretty Mode, you’ll collect rewards as you defeat random opponents, while in Free Play Mode, you can customize the experience by choosing which of the unlocked girls will join your table. With so many characters to meet, plus traditional mechanics that are fun and familiar, this is a fantasy experience that you can revisit time and time again!

Help your ninja buddie and his pals to go through 4 worlds and 36 levels in this side-scrolling arcade platformer game!

Battle your way through 3 realms of ‘Sector 781’, a pixel art platformer. Upgrade your character and weapons; collect shards to increase your energy supply. Use teleports to navigate around the realms. Shoot things that move and some that don’t move. Activate laptop checkpoints to save your position.

Welcome to Human Colony 31-5B! Playing Infestor you are a cute little green space alien invading your way across the colony. However since there are many physical obstacles in your way, you must gain control of the human inhabitants and use their powerful bodies to perform tasks that are beyond your tiny stature.

Jump high, push heavy crates, avoid pointy spikes, gun turrets, and other hazards in each brain-teasing level as you snatch bodies of the human race one at a time. How far can you take the colony conquest as you progress through 70 challenging levels?

Why is Flowing Lights different from other shooting games?

Puzzle elements! They offer a challenge for the brain on top of the immediate fun of destroying monsters. Deeper challenges, deeper sense of achievement!

How do these puzzle elements work?

Each fight has been designed as a puzzle that requires a new tactic. Thanks to a unique system of terrain and physics, bullets flow like a liquid and create new and gripping gameplay situations. The goal is not only to destroy all enemies but also to find the right tactic to do so! This may require several attempts so Flowing Lights has been designed to facilitate experimentation. Failing and retrying is part of the game! Fights can be restarted instantly and without any penalty.

Dive into a great adventure in the classic handheld era!

In a world where humans and octopuses are at war, Tako is a pacifist little octopus who rescues a woman from drowning one stormy night. A fairy sees this act of bravery and grants him the ability to survive on land. As he travels across the world, Tako defies his family and his people to try to resolve conflicts between humans and octopuses, plunging him into the very roots of this dysfunctional world.

Tako will solve puzzles, turn enemies into platforms by spitting ink at them, explore mysterious dungeons and fight tenacious bosses on his mission to end the war between the undersea Octopus kingdom and the terrestrial Human realm. Will you help this brave octopus to spread his message of tolerance and teach both species to coexist in peace and unity?

Nongunz is a nihilistic action-platformer roguelike.

Obscure in both gameplay and theme, it’s a riddle that demands sacrifice.

Rebuilt from the ground-up, the Doppelganger Edition is a remastered version of the original, never previously released on console, and features two all-new modes: Arena and Local Co-op.